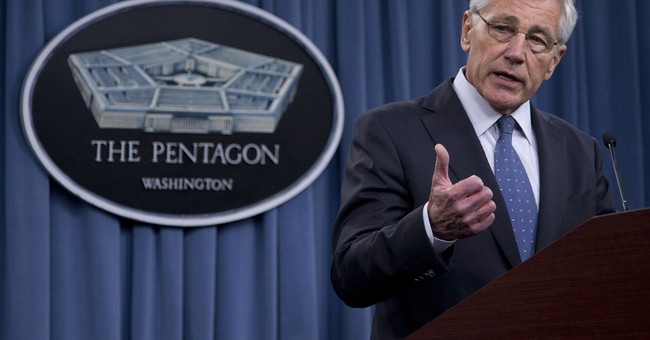 When Chairman Randy Frelinghuysen of New Jersey open's Thursday's hearing of the Subcommittee on Defense of the House Committee on Appropriations, Vladimir Putin and Xi Jinping will very much be in the room.

The Russian president has invaded a neighboring country and seized a huge chunk of it --for the second time in six years. The Chinese president is presiding over a massive arms build-up --a 12.2% increase in the PRC's already substantial public budget was announced las week-- and the PRC is taking increasingly hostile actions in the South China Sea. (Robert Kaplan's Asia's Cauldron: The South China Sea and the End of a Stable Pacific which arrived this week could not be more timely.)

The combination of the Murray-Ryan budget accord of late last year and Secretary of Defense Chuck Hagel's incoherent defense budget has left the Subcommittee a very difficult job: Reintroducing reality to the military budget. Todd Harrison, an analyst Harrison at the Center for Strategic and Budgetary Assessments provides some background on the Subcommittee's dilemma, but the short version is this: We don't know what the Joint Chiefs say we need to protect America, our allies, and the international waters through which commerce flows and by which freedom expands. The military budget has become wholly divorced from the military's many missions.

For more than two years now, since the infamous Super Committee and the "sequestration machine" that followed in its failure in November of 2011, the Pentagon has not been funded according to its needs but according to a formula imposed because of the failure of the president to deal seriously with the domestic spending mess, primarily as it connects to domestic entitlements. The president got his massive tax hike in January of 2013, but he did nothing to bring long-term domestic spending under control. So the sequester mechanism kicked in, wrecking havoc on our national security budget.

A handful of neo-isolationist Republicans have combined with a handful of strategically-placed deficit hawks to pretend that the cuts to the military have not been that horrible, and are in fact necessary. "Waste, fraud, and abuse" is their combined rallying cry, but this caucus of DOD-cutters do not represent the country. The country spoke --very loudly and very clearly-- when the Congress attempted to cut the retirement pay COLA earned by the active duty or recently retired military with a goal or a record of at least 20 years of service. The Congress's decision to target that group woke the sleeping giant of support for a strong American military and the men and women who serve in it, and very few elected officials missed the message of what awaits representatives or senators who try to balance the budget on the backs of the military.

The repeal of the cut to the COLA of the career military should not be mistaken for a repudiation of the GOP' drive to reform entitlements. It wasn't. The repeal of the COLA cut was, however, a giant flashing sign that the urgent need for domestic entitlement reform is not an excuse to gut the military further, and that in fact the Regean coalition was built on three legs, one of which is peace through the strength provided by the world's most competent and well-equipped military. Canards about our budget being bigger than the next ten combined do not answer the question of what America's military needs to do its many jobs? That's the answer that should drive the budget and nothing else. If the military's many jobs add up to a budget 20 times larger than the next ten nations combined, so be it. That is how the peace is maintained and would-be adversaries kept far and firmly at bay.

A corner in this debate has been turned and the Murray-Ryan budget accord overtaken by events, both political and international, especially because of Putin's adventurism and the PRC's growing threat.

It is up to Chairman Frelinghuysen and his colleagues to get some mission statements out of Secretary Hagel in response to key questions --e.g., do we intend to deter China from seizing more space and islands, keep international waterways open, respond to aggression against a NATO member or an ally like Japan?-- and then ask Chairman of the Joint Chiefs Martin Dempsey if the Pentagon has the resources it needs to accomplish all the missions the secretary agreed to? Dempsey is a straight shooter, and the Service chiefs are becoming increasingly candid that they are beyond cutting into bone but are now carving out marrow. The cutting has to end and in fact be reversed.

This will require first the Subcommittee and then the full Committee on Appropriations to bust the DOD cap imposed by Murray-Ryan, and to do so only for Defense and to do so openly and with an argument as to why each specific increase is being funded. Deficit hawks will scream, but Speaker Boehner and Leader Cantor should put the bill on the floor and vote on it and then send it to the Senate and see which members of both bodies want to face voters in the fall having shrunk from the challenges of Putin and the PRC.

The Party of Reagan is regaining its voice and now it needs some Members of Congress to do the same. Starting Thursday.