What Obama Said And Hillary Didn't Do 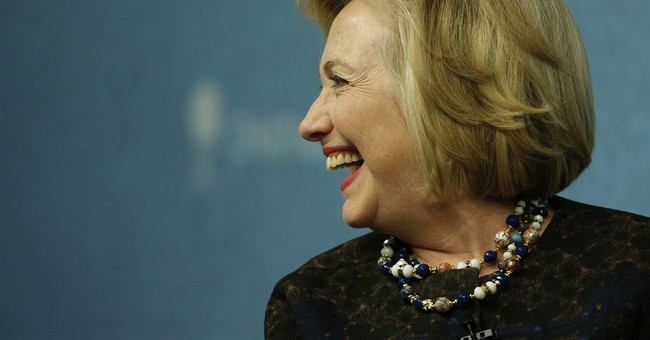 Two extraordinary interviews yesterday, each of which suggests the gathering storm for the party of Obama-Clinton.

The first, with Politico's Maggie Haberman, focused on Hillary's "record" as Secretary of State. The transcript is here.

The second, with Chicago Tribune columnist and MSNBC panelist Clarence Page, also tried to elicit from a supporter of Hillary any detail as to Hillary's achievements and then turned to the biggest story of the day --President Obama's whooper of a lie about people being able to keep their insurance plans.

Neither could produce a paragraph or even a complete sentence on Hillary's successes as Secretary of State. Both noted she had traveled quite a lot, but as I noted to Haberman, she isn't auditioning for the role of George Clooney for a remake of "Up In The Air." A would-be president ought to have a "have-done" list at her fingertips.

Page had the same problem. Four years is a long time to spend at a place to leave only wreckage behind, but that's what becomes obvious, clear away Benghazi specifically and Libya generally, not to mention Egypt and the entire Middle East plus fiascos with Russia and North Korea and you have a record of vast ineptitude. Hillary came, she saw --a lot of places-- and she left. Her spinners will begin to work up a list no doubt, but right now it ought to be obvious, so soon after she left office. What is obvious is that she didn't do anything worth remembering.

We will remember the president's massive and bald lie to the American people, and NBC News has triggered the avalance of scrutiny. Here's one of my exchanges with Page on this subject:

HH: Now Clarence, you have written a few columns defending Obamacare, but you can’t defend that as other than an utter untruth, can you?

CP: Oh, Obamacare is like the proverbial camel being a horse designed by committee, right? It’s gone through so many changes and all, that the original dream has been largely corrupted. And there’s no guarantee, I knew even, and Obama knew even at the time he said it, there was no guarantee everybody was going to keep their insurance, because people couldn’t keep their insurance under the old system.

HH: So he knew he was lying when he lied?

HH: He knew he was lying?

CP: Probably. Probably. But that’s one of those political lies, you know.

HH: Well, don’t you think a lot of people…

CP: It’s one of those, you know, in the abstract, it’s correct, but the fact is…

HH: Is it forgivable? Are you allowed to lie to get a bigger good? Is that it?

CP: Well, the question is, most people will be able to keep their own insurance policies. And that was the point he was trying to make. He was just being too grandiose and saying, and guaranteeing that everybody was going to keep their insurance.

HH: Well, I agree with you. He knew what he was doing when he did that.

HH: And is that acceptable for people to just out and out mislead the low information voters out there?

CP: He said it repeatedly in a political campaign that he won, so that’s what a political lie is all about, right?

HH: But when he said this, it was after he was already in the White House.

CP: Well, he said it on the campaign trail repeatedly.

HH: I know, but after he won, he then said it. Was that okay?

HH: Well, the difference is you’re the president of the United States.

CP: He made a promise to the public either way.

HH: So it doesn’t bother you that he lied to us?

CP: Well, a lot of things bother me. You act like all lies are equal, right?

CP: Is that what you’re saying?

HH: Does it bother you that this, on this occasion…

HH: Now you just said he lied, and I agree with you he lied. But does it bother you that he did?

CP: Well, a lot of things bother me more than that, but not because of overselling his program. Every president oversells their programs. But just the fact that the whole process of putting Obamacare together disturbed me that he gave up too much early on, in my view.

HH: Do you think he’s telling us the truth, or is he lying again about not knowing that Merkel’s calls were being tapped?

CP: Now there’s a lie, if I was the president and I did know Merkel’s calls were being tapped, I might just lie myself and say I didn’t.

Read the whole thing, but this is the heart of the matter. The left knows and the left doesn't care. When Mediaite put the interview at the top of their website last night the comments section filled with defenders of the president though not of Page though it was Page who was providing an honest assessment of a dishonest president.

Perhaps there will now be MSNBC's equivalent of a show trial for Page or mere internal exile of the Gulag of Disgraced Guests, but certainly Team Hillary is going to go to work putting out some talking points about what our former Secretary of State actually did other than jet from place to place and clinking glasses with Assad and embarrassing us in Russia.

Read Bret Stephens today from the Wall Street Journal: The Unbearable Lightness of Obama. The accelerating collapse of Obamacare--not the ash heap of the website but the second order impacts on the lives of tens of millions of Americans and the impacts on the economy-- is laying a lot bare, and perhaps Page is just the first of the honest lefties to appear, proclaiming that there is no sense in covering for the president who won't even try to repair the damage he has done.

The National Journal's Ron Fornier knows. He is reporting the approach of the twilight of the Democrats, and despite the shutdown's alleged damage done to the GOP, those soaring premiums and the broken promises by the president cannot be avoided, just as the burning countries left behind by Hillary cannot be denied.