What Has Ryan Wrought? 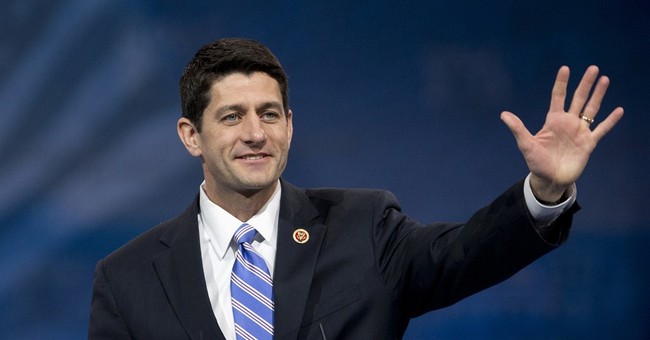 Paul Ryan is a leader, and hats off to him for stepping up and trying to bring coherence to the House GOP strategy and messaging. As one of the commentariat very uneasy with the Speaker's decision to open with a bid of a six week extension of the debt ceiling without any attached demands, I and my colleagues still have to recognize that someone needed to step up and pull the factions together, and that Ryan has agreed to grapple with the beast that is the House GOP Conference that is representative of its very varied party.

Whatever the result --and we don't know what it will be-- critics from right or left of what emerges as the deal will have to be very careful not to do to Ryan what has been done to Ted Cruz, to no lasting damage to Cruz but to great lasting damage to his critics. The diminishment of Cruz's critics is not good for the GOP either. Most of the time they are right in their observations of politics. That their upset got the best of their judgment is simply best forgotten for now, provided they leave off with it.

Disagreement with Ted Cruz (and Mike Lee, Rand Paul and Marco Rubio) on the tactics of the past few weeks is fine. Parties are big, sprawling affairs and they have to be if they are to assemble majorities that endure if only for a season or a session, so disagreements on tactics are inevitable. The near hysterical condemnation of Cruz, however, has been about those critics, not Cruz or his tactics, and the attacks have done real damage. The deeply personal assaults on Cruz have radicalized his core supporters, turning them from suspicious of the Beltway GOP to near-enemies of the same. Bad news all around because those core supporters are legion. The atmosphere in D.C. is poisoned enough (see Brit Hume's sober assessment) without the Beltway GOP going Borgia on each other.

When Ryan's plan is unveiled, it will be incumbent on the House GOP to pass it, preferably with unanimous support. Activists will have to swallow hard if it fails to satisfy them, trusting that the Chairman of the Budget Committee who has truly been through the wars with the president did indeed get the best deal available. Conference critics of the tactics to date (see my interview from Wednesday with Pennsylvania's Charlie Dent) should stand with critics of the compromise and vote yes.

But there will be critics of the deal on the media sidelines, and those critics should not be condemned as lunatics or fringe extremists and more than supporters should be mocked as RINOs. There are plenty of targets for political ire from among the president and his allies in the Senate and House that time and fury shouldn't be spent by conservatives on the allies.

The disaster that is Obamacare is fraying everyone's poise as more and more horror stories pile up. One caller to my show's last hour Thursday detailed what has happened to his own premium just after another described the impact to his business. (He will be laying off 2 or 3 of his seven employees.) People who see their lives or businesses injured by this terrible law aren't in the mood to hear from the pundit class that the GOP did the best it could even if the GOP did the best it could. They are cheering Cruz et al for trying to do more. The enemy of their friend will become their enemy, and if the business is lost or the premium destructive of dreams, that anger will be real and lasting.

I'll begin Friday's show with Hillsdale College's Larry Arnn, the rare academic who has real influence within the conservative wing of the legislative party. Ordinarily I end Friday's show with the Hillsdale Dialogue, but am starting the program with the conversation this week because it is the perfect moment for some long range perspective.

More of that crucial perspective comes from, of all places, the lefty analyst Nate Silver. Read his cautionary take on the polls and the pundits' predictions. The bottom line is that no one yet knows how this will play out, and those who purport to know are just making it up.

What we do know is that the GOP is not "surrendering" or "caving" --and that was the emphatic point made to me by House Financial Services Chair Jeb Hensarling in Thursday's interview with me after he emerged from the meeting with the president. (The full transcript is here.) Hensarling is as deeply conservative as Ryan, and desreves the opportunity to defend any framework that emerges.

So here's hoping the president actually wants a negotiation and not a capitulation, and that the GOP wouldn't give him the latter in any circumstances. There may be a way out of this impasse that makes some crucial changes to Obamacare --like the repeal of the job- and innovation-killing Medical Device Tax-- and no less a conservative authority than Charles Krauthammer has predicted the president " will blink."

And on that the GOP ought to be, finally, in agreement.