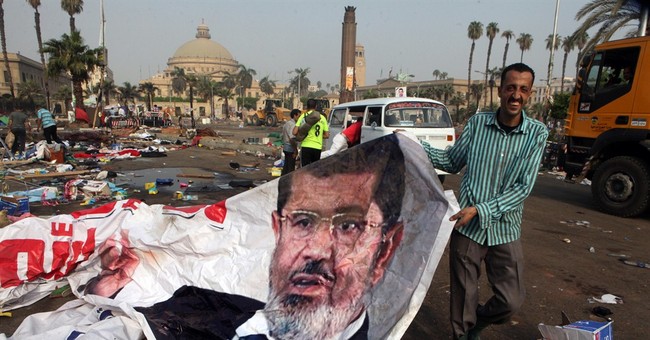 "America has no permanent friends or enemies," Henry Kissinger famously remarked, "only interests."

Super-K was paraphrasing Lord Palmerston who long before Nixon's foreign policy guru spoke had proclaimed that "Britain had no eternal allies and no perpetual enemies, only interest that were eternal and perpetual."

Bismarck must have said something similar. And Disraeli. And Napoleon. And Caesar. And probably Alexander and everyone else remotely successful at building and maintaining world power if only for a period of time.

Which brings us to Egypt and General Abdel Fattah Saeed Hussein Khalil el-Sisi, for the time being --and probably for the next many decades-- the number one guy in Egypt. He is the 58-year old Defense Minister and Commander-in-Chief of the Egyptian Armed Forces.

[Sisi] graduated from the Egyptian Military Academy in 1977. He attended the following courses:

Smarter than your average bear, then, and well acquainted with numerous military men and women in the west generally and the U.S. specifically.

Now ousted former Egyptian President Mohamed Morsi was also educated in the U.S.. obtaining a PhD even from the University of Southern California. Morsi was even a professor at Cal State Northridge, and returned top a quarter-century academic career in Egypt before his plunge into politics.

Morsi, though, is a member of the Muslim brotherhood, the radical nature of which is detailed in Lawrence Wright's Pulitzer Prize winning The Looming Tower, and Sisi is a military man. Both are Muslims, but both have very different world views.

Most Americans look at Egypt and see a partner in the Camp David accords, the protector of the Suez Canal, and one of the three keys to regional stability along with Saudi Arabia and Israel.

When Egypt has been unstable --under Nassar and over the past two years-- the region has been unstable, and thus the world shakier by far. The authority of General Sisis, whether wielded in concert with an elected civilian government or directly through the military, is simply preferable for American interests than the transition of Egypt into radical Islamist theocracy, whether gradually as has been happening in Turkey or suddenly as happened during the carter years in Iran.

I spent Wednesday interviewing experts on the Middle East generally and Egypt specifically: The New York Times John Burns (transcript here), former U.N. Ambassador John Bolton (transcript here), AEI's Michael Rubin and Fred Kagan and Stratfor's Reva Bhalla (transcripts will be here Thursday by mid-day) and the points of view were varied except for one key point: The Muslim Brotherhood is not a friend of freedom generally or the U.S. specifically. (Reva Bhalla, by the way, should be on every television booker's short list for new faces with talent and charisma).

Kagan would lean hard on the Egyptian military; Ambassador Bolton, not so much. I am in the camp of keeping Egypt out of the hands of the Brotherhood and out of the orbit of the Chinese and the Russians.

I am also for the party that protects religious minorities against sectarian violence of the worst sort, which is the Egyptian military.

Every guest on Wednesday, like every human being with a heart, deplores unnecessary violence and senseless loss of life. "Everybody regrets the bloodshed," Ambassador Bolton told me, "but make no mistake about it, the Brotherhood wanted this confrontation."

There is a civil war brewing in Egypt, though, and the United States cannot stand above the fray and wish that the unicorns would emerge from the forest for all to take turns riding upon.

General Sisi seems to be a man of modernity, his opponents not. Pray the violence ends quickly, and pray as well that when the country returns to stability, an enlightened set of rulers is in place, determined to steer the country towards the West and towards a modern understanding of liberty and human rights, not towards a theocracy that is hostile to all non-believers and committed to an understanding of women that is pre-modern.

This isn't a close call. Jimmy Carter lost Iran to the worst sort of darkness by refusing to stand with a flawed by improving Shah who was far superior in every way to the Ayatollah who replaced him.

Will President Obama double down on losing Egypt as well as Libya and the resistance in Syria? When he breaks from his golf game, perhaps someone in the kept media will ask him.