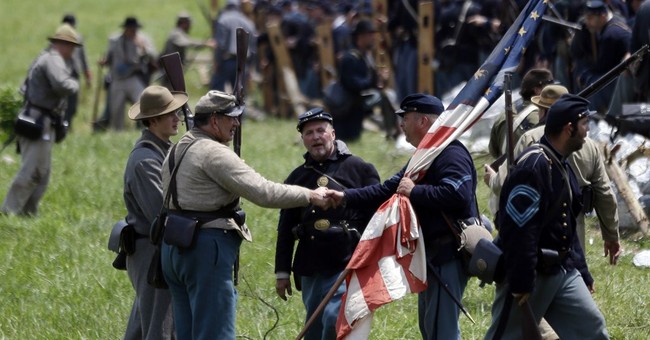 July 3 marks the last day of the battle of Gettysburg 150 years ago -- Pickett's Charge, the "high water mark of the Confederacy."

July 4 is of course Independence Day, but this year it is also the sesquicentennial of the surrender of Vicksburg, which split the rebel states in two by securing the length of the Mississippi for the Union.

This week, a century and a half ago, marked the certain beginning of the end for the Confederacy and thus of slavery and the rise of the great Republic of freedom.

To commemorate this week, I am spending the next three days of broadcasting with five extraordinary authorities on the events both of the founding and of the saving of the Republic.

Wednesday's program begins with National Review editor Rich Lowry, whose new book Lincoln Unbound is a wonderful walk through the life and, crucially, the political theory of Lincoln, with a much needed emphasis on what drove the young Lincoln to succeed, what shaped his political philosophy, how that philosophy reached its full development in the Lincoln-Douglas debates, and how the country needs a new rebirth of that philosophy today.

Thursday's Independence Day show features a long conversation with one of America's great students and teachers of political theory, Professor Harry Jaffa, whose Crisis of the House Divided plunges deep into the substance of the Lincoln-Douglas debates and of the Declaration's role in Lincoln's thinking.

Jeffrey Shaara, one of the country's most prolific writers about the Civil War is my guest for hours two and three of Wednesday's show, and his most recent novel A Chain of Thunder -- the second in a series -- is a novel of the siege of Vicksburg, telling the story of the campaign by U.S. Grant that many consider to be the finest ever fought on American soil, and bringing home to many readers for the first time the story of the fall of the fortress on the Mississippi that doomed the Confederacy. I recommend reading A Blaze of Glory -- the first book in the series about the battle of Shiloh a year earlier -- before the new book, but Shaara has done a great service to both sides of the Vicksburg struggle.

Jeffrey Shaara followed in the footsteps of his famous father Michael Shaara, whose The Killer Angels won the Pulitzer Prize in 1974 and is the justly famous novel of Gettysburg, now in its 114th printing. I still marvel that some people haven't read the book, but if you are among them, do yourself an immense favor and read or reread it to appreciate the events of this week 150 years ago, and the minds and actions of the men who made them.

VDH will spend a couple of hours reviewing with me the course of the entire war with an emphasis on the battles of this week, one of which, the siege of Vicksburg, featured William Tecumseh Sherman, who is one of the generals profiled in Hanson's new The Savior Generals.

The special programming concludes with an hour devoted to the genius of Abraham Lincoln, so well known to Dr. Arnn, and while all of the Hillsdale Dialogues on the great authors and figures of Western civilization are very well worth listening to, this hour on the man who saved the Union is perhaps the finest of them all. No Lincoln, no United States. No United States, no...well, so many things, including victory in the three great conflicts of the last century and the possibility of victory in those of this era as well.

There is incredible turmoil abroad and at home, but a country that survived the carnage of 150 years ago this week can certainly survive and prosper in these times as well.