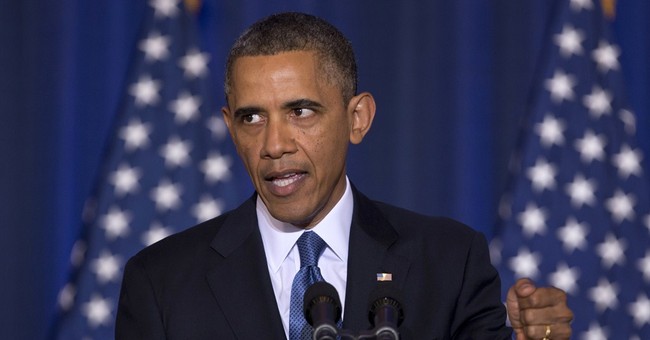 What gaineth a president if he wins over knuckle-dragging right-wing loon commentator McCarthy but loses the New York Times? ”The administration has now lost all credibility.” Ouch!

Ouch indeed, but if you really need reassurance that President Obama’s thought police are not monitoring your every move, read McCarthy’s longer essay on the NSA program here.

McCarthy had reached his conclusion before I posted mine, but I got to the same place before going on air Thursday. The PRISM story followed later in the day, but the issue is the same.

Data collection is not data abuse. A disease of government abuse and intimidation at the IRS, the DOJ, EPA and elsewhere throughout the executive branch does not mean that the national security agencies are rampaging through the records of American citizens compiling massive dockets with which to blackmail and control foes, friends and the simple bystanders.

It does mean that serious participants in the war on terror are constructing the walls of security necessary to stop jihadists before they devastate neighborhoods, cities or entire regions of the country.

Mark Steyn nailed the problem in his conversation with me yesterday:

HH: Now I am not really too upset [about the NSA story]. I used to do this for the government in ’85 and ’86 for two attorneys general. I filed the applications for warrants before the Foreign Intelligence Surveillance Court, and the AG would review them and sign them, and you’d send them over. And I think it’s like Where’s Waldo. [The NSA is] getting the background against which they can then go look for Waldo…so I’m not particularly exercised about the NSA story. Are you, Mark Steyn?

MS: Well, I wouldn’t be were it not for the context in which it appears. I mean, I think there’s no doubt that computers and technology being the way they are, that governments can know everything about you pretty much when they want to. And I accept the point of my friend and colleague, Andy McCarthy, who points out that in fact the Supreme Court ruled in favor of this kind of meta-data surveillance in 1979, although obviously, that’s before the age of the mobile phone, where in effect, tracking what calls you’re making is also a way of tracking where you physically are at any one time. But putting all that aside, you know, in all free societies, freedom, liberty, democracy, depends on a certain circumspection of the government class toward the powers they have. If they want to, they can ride a coach and horses through the thing, and do pretty much what they want to you. And this revelation comes up in the wake of a tax collection agency that is leaking information on groups to their political opponents, in terms of the context of an Attorney General who goes on TV and denies that he lied to Congress on the grounds that in fact, he was lying to the judge. So this is when he wanted to read a journalist’s emails. So that’s the context in which this occurs, and I think in that context, it is slightly disturbing.

Because trust in President Obama is eroding faster than the Cleveland Indians’ standing in the AL East, support for serious surveillance of jihadists is being undermined. How quickly is the president’s stock falling on the left?

“The administration has now lost all credibility on this issue,” the New York Times opined yesterday. “Mr. Obama is proving the truism that the executive branch will use any power it is given and very likely abuse it.”

Would that the Times had the same skepticism of the president’s assurances concerning Obamacare and the massive authorities it invested in the government, or the proclamations about the dawn of a new era of border security on the part of proponents of the Gang of 8’s bill as it presently stands.

Conservatives are very aware of what the president has done with his serial assaults on the rights of Americans, whether with his demands that religious people abandon their Free Exercise rights in the face of the HHS mandate or his abandonment of DOMA before the courts or his suspension of enforcement of the immigration laws with which he disagrees. The law-professor-turned-president has less appreciation for the rule of law than any of his predecessors.

But, but, but…the would-be killers of Americans by the tens of thousands (and more) have not abandoned their ambitions. The president can declare a unilateral cease-fire, but the Islamists have not signed on, nor will they. They will Just. Keep. Coming. This week, this month, this year and for decades to come.

That is the reality, and so is the reality of the need for massive data bases from which to follow the money and the WMD and the fanatics who will use them. They are “all in” and will stay that way, so we must be “all in” when it comes to stopping them before they strike.

The IRS scandals and the stonewalling of that investigation –and of Benghazi and the snooping of journalists—create a predicate for not believing the president and his senior officials on those controversies, but they do not by themselves call into question the need for thorough, sustained tracking of terrorists.

The opponents of the war would love nothing more than to turn the conservatives’ distrust of the president into a powerful cudgel with which to cripple the nation’s national security efforts. Conservatives have to resist that temptation while maintaining unrelenting pressure on the executive branch’s genuine assaults on free speech and association.

This is the hardest of balancing acts, the most difficult of means between extremes to find and hold on to.

It can be done, and must be done, unless another holiday from history is to be declared and another 9/11, only one far worse and far deadlier, set in motion to arrive on another peaceful morning when the country believes it is safe.

Pick a surrogate on these complicated calculations of security versus the threat of an intrusive government –someone like McCarthy—and follow what they write closely. When they sound the alarm that the president and his operatives have turned a necessary watchfulness into another abuse, then hit the panic button.

Until then, work for the success of candidates this fall and next who have deep within them an understanding of what is acceptable and what is not. This is not a one-time choice between outrage and fecklessness, but a decades-long maturity that depends, ultimately, on men and women of the highest character in the positions of greatest power.