The Talk Radio Primary Begins: A Tale of Two Senators 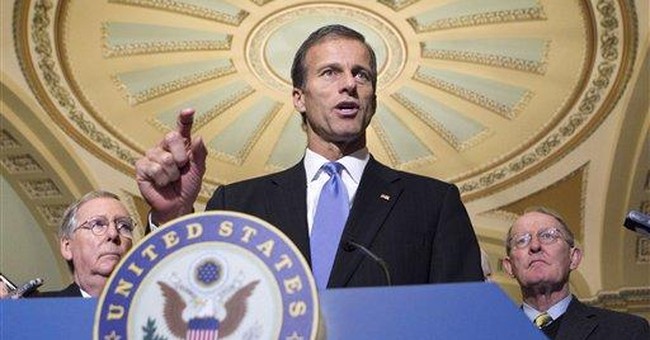 Marco Rubio spent a half hour on the radio program with me yesterday, calling in to respond to the many criticisms (most bogus, some legit) launched at the first draft of immigration reform. (Transcript here.) The wide-ranging interview of the Florida senator also included criticism of the president's press conference and his Syrian "red lines."

He also managed to endorse the Dolphins draft. The transcript is here. The Washington Examiner's Byron York assesses the defense of the immigration bill the senator mounted here.

"[T]there’s no doubt," concludes York, "that one of the bill’s main architects believes it will have to have tougher security provisions if it is to become law."

Later in the program South Dakota's John Thune came by the studio and settled in for most of the hour for just as expansive a chat on the president, the prospects for tax reform this year --very low-- and of course immigration reform.

Off air he chatted easily about the decline of the Lakers, the basketball team he has followed since he was a small lad, and on air he made the case for the House sending over a clean repeal of the medical device tax so that much needed relief for a huge number of job creators can pass the Congress quickly:

I understand where the House is coming from on that, because anything you send to the Senate, to the Democrat-controlled Senate, there’s a danger there associated with that. But this is such a clear, clear win, I think. And when you have 79 senators, Republican and Democrat who voted to repeal this tax, I think you send it over there and put the pressure on the Senate to repeal it. And I do believe there will be a very big bipartisan vote to repeal it. And I think it would be very hard for the Senate Democrats to try and muck it up with other [aspects] of their policy agenda and send it back to the House. So I hope the House will find their way to do that.

Benghazi and the Boston bombings also came up with Thune, as of course did immigration reform. The complete transcript is here.

If my standing invitations to appear and chat on air are picked up by Senators Kelly Ayotte and Rand Paul, and Governors Chris Christie, John Kasich and Scott Walker, I'll know for certain that the period of official mourning is over and the race for the GOP nomination has begun. Yesterday's appearance of two prominent senators who are on most short lists suggests to me that it has, and not a moment too soon.

Beltway insiders like to talk about the "hidden primary" for D.C. talent, and the money primary, which doesn't really get underway until after the 2014 elections, but the talk radio primary is the first to unfold and it is arguably the most important.

Nobody votes in the talk radio primary, but the center-right listens, and it listens with Hillary or Slow Joe Biden in mind, thinking about a debate stage 40 months down the road in the middle of what will surely be desperate times for the country abroad, and either a dead economy or roaring inflation at home.

President Obama is already a lame-duck, reduced in Tuesday's press conference to a series of punch lines about pink lines and the need for Gary Sinese and his CSI team to get to the White House. But after we struggle through three more years of our era's Andrew Johnson, the GOP will need a nominee who can win. The sorting-out has begun.

Rubio is bold and passionate, throwing himself into the most difficult of issues, a big gamble with potentially big rewards and a huge downside.

Cool, collected, tall and ridiculously statesmanlike-looking, John Thune talks easily and with detail on every subject raised. This is the fellow who beat Tom Daschle, and he has confidence. He will be 55 in 2016 --15 years and two cultural generations younger than Hillary.

Rubio will be 45, fluent in Spanish and, along with Thune, the sort of telegenic, charismatic gate-crasher who took on a highly favored neo-incumbent in Charlie Crist to win his first seat at the big table.

The other names I have mentioned and perhaps one or two more from among the governors (and even, perhaps, Ted Cruz in a replay of the Obamian "why wait" campaign of 2007-8?) are all as intriguing, and each with a different political skills set. Serious people, all, and hopefully eager for the talk radio interviews that sharpen skills even as they collect notice and early support.

Over at the Republican National Committee, Reince Priebus is working out primary rules and dates and a schedule of debates that will keep the marginal characters off the stage, and put serious questioners, not MSM hit men from the DNC, in the chairs asking questions. The talk radio primary, which runs at least until the first of those televised debates, is underway, and there are lots of reasons for the GOP to nurse its optimism back to life.