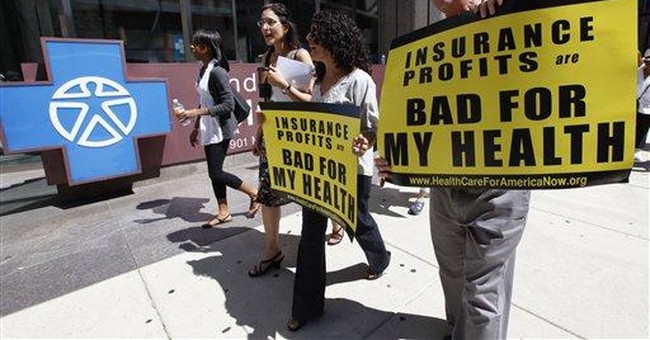 He wants senior citizens to pay more for Medicare but get fewer benefits. He wants them to ignore the rationing embedded in his proposals to cut hundreds of billions from the Medicare budget and to drastically increase the cost of Medicare Advantage.

President Obama wants employers to pay more in health care premiums, and if they don't provide health insurance for their employees, he wants them to pay penalty taxes. He doesn't care that tens of thousands of small businesses are struggling to stay open and keep their employees employed. And he doesn't care that the expiration of the Bush tax cuts will hit these businesses hard.

President Obama wants everyone to sacrifice. Well, not quite everyone.

There is one group that President Obama doesn't mention, one group he doesn't demand sacrifice for the greater good.

President Obama is protecting the plaintiffs' lawyers who sue doctors, hospitals, and pharmaceutical companies and reap billions in fees from the tort lottery.

Though the broken, out-of-control tort system drives the cost of medicine through the roof, President Obama hasn't demanded any changes to that system, like a cap on pain and suffering damages, or a cap on lawyers' fees, or an excise tax on plaintiffs' contingency awards.

President Obama hasn't even asked for a provision that would award wrongfully sued doctors and hospitals the cost of their defense.

President Obama hasn't asked anything of the plaintiffs' lawyers because those plaintiff lawyers contribute tens of millions of dollars to Democratic candidates. They have done so for years and they will continue to do so as long as the Democrats protect their business. They put a lot of money into the Obama campaign and the Democratic drive to take over Congress, and their investment is paying off handsomely.

The president and Congressional Democrats have been protecting the plaintiffs' lawyers' business all year long, even though their business is a chief driver of skyrocketing health care costs.

Next week's speech by President Obama to the Congress will be full of the increasingly tiresome rhetoric of crisis and sacrifice.

But it won't be talking about the plaintiffs' lawyers and the costs they impose on us all.

And it certainly won't be demanding serious reform of the tort system as part of the "reform" of health care.

And therein is all you need to know about the merits of Obamacare. The president doesn't believe American health care is in a crisis, because if he did, he'd call for the tort reform that every expert believes is necessary.

But he won't. So we all know it is a giant exercise in hypocritical politics of the worst sort.

Obamacare deserves to die for a lot of reasons, but large among them is the sheer duplicity of demanding deep sacrifices of everyone except the plaintiffs' lawyers who have grown rich beyond most people's imaginations profiting off of the doctors and hospitals and pharmaceutical companies that work to keep Americans healthy.

Keep this in mind when you watch the president next week, if you even bother to watch.