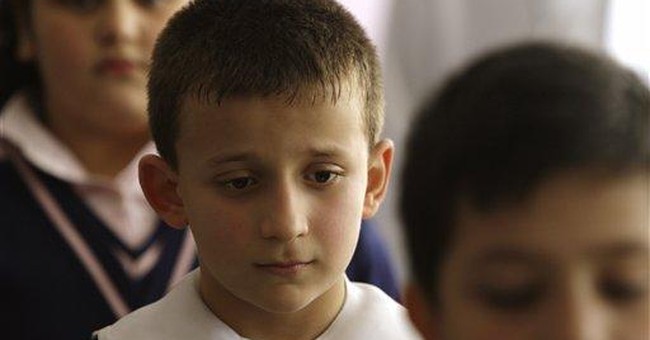 I recently was able to re-establish contact with one of the many great teachers I had in my twelve years of Catholic education --Sister Mary Jean, though when I had her she was Sister Mary Aloysius. She's still at it, well into her fifth decade as an educator. She was a great classroom presence, a skilled algebra and geometry teacher, and a dynamic force in our school.

I had many such teachers whose names recur to me almost weekly: Ron Karrenbauer, Sr. Timothy, Fred Hoover, Kathy Nosich. Almost everyone I have ever met who works in words can recollect tremendous classroom teachers from their past.

The inner city has always had its share of enormously gifted and dedicated teachers, and occasionally one of their stories will escape into the public eye, and he or she will be celebrated. But it is tough, hard work, and as the test scores will tell anyone who reads them, we have been losing a battle to educate underclass kids, a battle that America used to routinely win.

Now one of America's finest education reporter/writers --actually, he's just a terrific writer period-- Jay Mathews brings out a book that will lift the spirits of anyone who cares about the mess that is public education in many major metropolitan areas: Work Hard. Be Nice. How Two Inspired Teachers Created The Most Promising Schools In America. This is the story of Michael Feinberg and Dave Levin, two Ivy league graduates who signed up for Teach for America in 1990, failed miserably in their first months in the classroom, and then began a program of bringing to their desperately poor students discipline and enthusiasm, long school days, Saturday and summer school and rewards based on achievement. Nearly two decades later the KIPP --"Knowledge Is Power Program-- charter school effort they began in Houston and the Bronx has spread to 66 schools in 19 states enrolling 14,000 students. It continues to grow --thanks to the crucial support of GAP founders Doris and Don Fisher, their talent scouts Scott Hamilton and Stacey Boyd and enthusiastic school superintendents across the country-- recruiting new teachers, students and parents across the country and opening new schools in welcoming districts. With every new success, KIPP proves again that many hundreds of thousands of kids who are warehoused in failing schools are perfectly capable of achieving in middle school, succeeding in high school, and graduating from college.

There are no secrets in KIPP, just old lessons relearned and embraced by committed teachers willing to bring astonishing levels of energy to their classrooms. The charter school movement has always had its enemies, and KIPP has its share of critics, and their opinions are fairly chronicled by Mathews. (A transcript of my interview with Mathews is here . A podcast of the hour-long chat is here.)

But Mathews --a veteran of almost 30 years of excellent reporting on schools-- cannot but leave readers amazed and impressed by what KIPP has accomplished and the charisma of its founders and associated heroes, like the GAP stores founders who have funded a large roll-out of the basic model. Mathews knows that most education books are deadly dull, full of statistics and cliches, so he draws the readers in by writing biographies of all the leading characters, and given the kaleidoscope of types --Harriet Ball, Rafe Esquith, Frank Corcoran-- plus the career ups and downs and love lives of the Feinberg/Levin duo (and especially their pratfalls and joys along the way), the stories carry the message that reform is possible and children can learn even when they come from the toughest circumstances. The portraits of many of the children who rise to the challenge of hard, sustained study are inspiring and touching, and some of these stories --like the tragic death of Kenneth McGregor playing high school basketball-- will not be forgotten.

Work Hard. Be Nice. should be required reading for every college student considering a teaching career, and every teacher who works hard at his or her job will love it, while the class room time servers and distant educrats will be shamed by what they have not done and the effort and energy they have left unexpended. The audience should also include every legislator at every level, from local school board member to the new president. Education can work again. There is no reason why millions of American children have to emerge from middle schools unprepared for high school and the life beyond it.