Sarah Palin: "I Know What Americans Are Going Through" 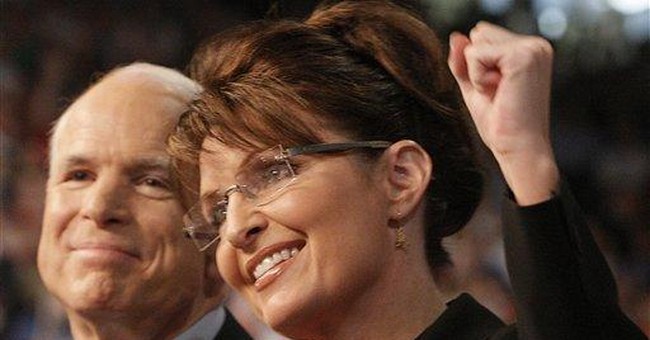 Hugh Hewitt: Governor, your candidacy has ignited extreme hostility, even some hatred on the left and in some parts of the media. Are you surprised? And what do you attribute this reaction to?

Sarah Palin: I think they’re just not used to someone coming in from the outside saying, “You know what? It’s time that normal Joe six-pack American is finally represented in the position of vice presidency.” I think that that’s kind of taken some people off guard, and they’re out of sorts, and they’re ticked off about it, but it’s motivation for John McCain and I to work that much harder to make sure that our ticket is victorious, and we put government back on the side of the people of Joe six-pack like me, and we start doing those things that are expected of our government, and we get rid of corruption, and we commit to the reform that is not only desired, but is deserved by Americans.

Hewitt: Now governor, the Gibson and the Couric interview struck many as sort of pop quizzes designed to embarrass you as opposed to interviews. Do you share that opinion?

Palin: Well, I have a degree in journalism also, so it surprises me that so much has changed since I received my education in journalistic ethics all those years ago. But I’m not going to pick a fight with those who buy ink by the barrelful. I’m going to take those shots and those pop quizzes and just say, “That’s okay.” Those are good testing grounds. And they can continue on in that mode. That’s good. That makes somebody work even harder. It makes somebody be even clearer and more articulate in their positions. So really I don’t fight it. I invite it.

Hewitt: Have you followed the attacks on you, say, via Drudge or the blogs? Some of them are just made up and out of left field, others are just mocking. Do you follow those?

Palin: No, I sure don’t, and thank God I don’t have time to follow those. I think that those shots, too, though, no matter what we’re taking and receiving, it’s nothing compared to what real shots are against Americans in this world. Americans today who are worried about losing their home and figuring out how in the world they’re going to pay their fuel bill next month, and send their kid to college, and may be worried about losing a loved one that they’re sending off to a war zone to protect our rights. Those are the shots that Americans are taking, so all this political nonsense and the lies, the rhetoric that is spun out there about someone just trying to offer themselves up in the name of service to this great country, I’ll take it.

Hewitt: Governor, you mentioned the people who are struggling right now. Have you and your husband, Todd, ever faced tough economic times where you had to sit around a kitchen table and make tough choices?

Palin: Oh my goodness, yes, Hugh. I know what Americans are going through. Todd and I—heck, we’re going through that right now even as we speak, which may put me again kind of on the outs of those Washington elite who don’t like the idea of just an everyday working class American running for such an office. But yes, there’s been a lot of times that Todd and I have had to figure out how we were going to pay for health insurance. We’ve gone through periods of our life here with paying out of pocket for health coverage until Todd and I both landed a couple of good union jobs.

Early on in our marriage, we didn’t have health insurance, and we had to either make the choice of paying out of pocket for catastrophic coverage or just crossing our fingers, hoping that nobody would get hurt, nobody would get sick. So I know what Americans are going through there. And you know, even today, Todd and I are looking at what’s going on in the stock market, the relatively low number of investments that we have, looking at the hit that we’re taking, probably $20,000 dollars last week in his 401(k) plan that was hit. I’m thinking, “Geez, the rest of America, they’re facing the exact same thing that we are.”

We understand what the problems are. It’s why I have all the faith in the world that John McCain is the right top of any ticket at this point to get us through these challenges. It’s a good balanced ticket where he’s got the experience, and he’s got the bipartisan approach that it’s going to take to get us through these challenges. And I have the acknowledgement and the experience of going through what America is going through.

Hewitt: Governor, when you say things are tight right now, is that simply because of Todd being off not working? Or is it because of extraordinary demands on the fiscal resources of the Palin family? What’s the situation there?

Palin: No, it’s just the great financial crisis that America is in as our savings accounts also, and a 401(k), they’re being hit.

Palin: Our stocks, you know, they took a hit yesterday. And then of course, just the same thing that other Americans are asking themselves today. We’ve got three teenagers. How are we going to pay for their college education? How are we going to make sure that we’re investing wisely today? We’re putting a lot of faith in other people who are using our money as investments. We have to count on the federal government to be overseeing these agencies and entities, making sure that we’re not going to get screwed on this deal, and that our savings are safe.

So there again, John McCain’s got some great ideas on granting authority, for instance, to the FDIC, making sure that our deposits are insured. He wants to increase that deposit insurance cap of all of our money, our savings, from $100,000 dollars up to $250,000 dollars, so that families like mine, so that we don’t have to worry about our money being safe or not under FDIC.

Hewitt: Governor, let’s turn to a couple of issues that the MSM’s not going to pick up. You’re pro-life, and how much of the virulent opposition to you on the left do you attribute to your pro-life position, and maybe even to the birth of, your decision—your and Todd’s decision—to have Trig?

Palin: I think that that’s been probably the most hurtful and nonsensical slap that we’ve been taking is our position that we have taken: Pro-life, me personally, and saying that even though I knew 13 weeks along that Trig would be born with Down syndrome, and I said, “You know, he’s still going to be a most precious ingredient in this sometimes messed-up world that we live in.”

I know that my son is going to provide a lot of hope and a lot of promise in this world, and I’m so thankful of course that I’ve had the opportunity to give him life and to bring him into this world. But I think truly, that that’s been a hurtful slap that we have taken, because people just don’t understand. Ironic too, Hugh, that some would consider my position on life and trying to usher in a culture of life, respecting the sanctity of life in America, that that is seen as an extreme position when to me, an extreme position is one that Barack Obama took when he was in the Illinois State Senate, not even supporting a measure that would ban partial birth abortion, not even supporting a measure that would during, after a botched abortion and that baby’s born alive, allowing medical care to cease and allowing that baby to die. That to me is extreme. That’s so far, far left it’s certainly out of the mainstream of America. To me, that is the extreme position, not my position of just wanting that culture of life to be respected and not wanting government to sanction the idea of ending life.

Hewitt: Do you think the mainstream media and the left understands your religious faith, Governor Palin?

Palin: I think that there’s a lot of mocking of my personal faith, and my personal faith is very, very simple. I don’t belong to any church. I do have a strong belief in God, and I believe that I’m a heck of a lot better off putting my life in God’s hands, and saying hey, you know, guide me. What else do we have but guidance that we would seek from a Creator? That’s about as simple as it gets with my faith, and I think that there is a lot of mocking of that. And you know, so be it, though I do have respect for those who have differing views than I do on faith, on religion. I’m not going to mock them, and I would hope that they would kind of I guess give me the same courtesy through this of not mocking a person’s faith, but maybe perhaps even trying to understand a little bit of it.

Hewitt: Governor, let’s close with some foreign affairs. It is reported that you had an Israeli flag in your governor’s office. You wore an Israeli flag pin occasionally. One, is that true? And two, why your support for Israel?

Palin: Well, it is true, and I ran into Shimon Peres recently at a meeting, and he even pointed that out. He said, “I saw a picture of you on the Internet, and you had an Israeli flag in your state government office.” And I said, “I sure do. You know, my heart is with you.” And all of those trials and tribulations throughout history that Israel has gone through, not only does that allow me to want to support that country, but Israel is our strongest and most important ally in the Middle East. And they are a democratic country who I believe deserves our support, and I know that John McCain believes as I do—that Israel is our friend, and we need to be there to support them. They are there for us, and I do love that country.

Hewitt: Last question, governor. Have you and Todd heard from your son? And how is it on your nerves having your son deployed?

Palin: That little stinker, I guess he’s called his girlfriend a couple of times, but can you believe he hasn’t called his momma yet? He’s over there. They were just leaving Kuwait heading into Iraq, and I am just so extremely proud of Track, my son, and all of the men and women, of course, serving in the military. I’m proud that my son made this independent and very wise decision as such a young man at 18, deciding—you know, he realized there’s something he can do to help, to contribute, to help protect our nation, and I couldn’t be more proud of him and all those who choose to serve in our military. They’re serving for the right reasons. God bless them, God love them.