The Least Unpredictable Campaign Ever? 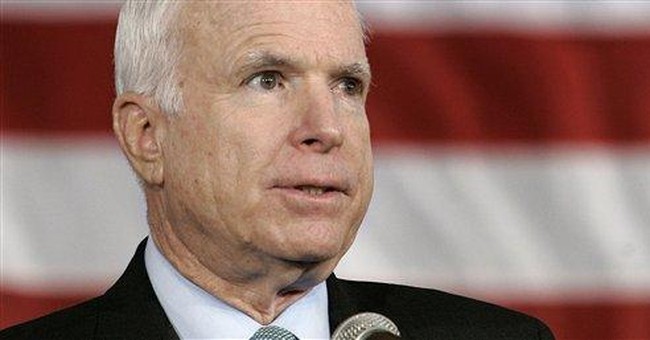 McCain-Obama: Will the domestic campaign hold any surprises whatsoever? Or will only the backdrop from abroad change, and with it the election dynamic?

John McCain will talk about the wide war and the dangers our enemies pose. He will do so every day all day, and every headline from the world that underscores the plans and attacks of the jihadists will be an exhibit in his appeal for support.

When the two meet to debate--McCain ought to challenge Obama to a series of summer debates as the inexperienced Chicago pol isn't remotely ready for prime time if the questions are at all pointed--expect McCain to return again and again to the threats that are real and growing around the world. Obama will counter with the deep desire of many Americans for a world different from the one in which we live, hinting that we are in part responsible for this world, and that he can help change the circumstances.

McCain will talk about Pakistan's nuclear arsenal, Iran's nuclear ambitions, the jihadists' worldwide network of extremists and their endless search for weapons with which to wound the West.

Obama will talk about paying for prescription drugs with a credit card and about the cost of college.

McCain will use terse, short sentences and biting humor.

Obama will use soaring rhetoric (some of it borrowed) and rhetorical questions.

In the background will be Obama's two young daughters, and John McCain's Annapolis Midshipman son.

Obama has to hope that the conservatives stay estranged from McCain, but they won't. Here's the intellectual exercise conservatives have to undertake:

Imagine how bad it could be in the next four years: Iran gets its nukes and unveils a delivery system. Pakistan's chaos mounts and an Islamist government takes over. Turkey's Islamists demand action against our Kurdish allies. Hezbollah and Hamas relentlessly attack and provoke Israel and a replay of the summer of 2006 begins. Kenya erupts in slaughter. Serbian militias attack the newly independent Kosovo. Rioting in the French suburbs accelerates. Russia shuts off its gas, and China demands Taiwan reach an accord. A terrorist attack occurs in London, Paris or D.C.

Who, conservatives have to ask themselves, would they want in the White House should any or all of these events--each possible--begin to unfold after George W. Bush has left the White House?

The campaign ahead has to be about the realities of the world we live in, not the one we wish we had. Senator Obama's minions can continue to treat him as the Dalai Obama, but like other other-worldly prophets of peace, Obama's dreams have left him extremely ill-prepared for the way the world is.

What, Senator Obama will answer, does this generation value of the accomplishments of the past two presidents? What is it about the world that D.C. elites have brought us do you wish to continue? Which of the tactics and strategies, Senator McCain, do you find most effective?

And so it will go every day from now until November. It may be the enemies of the West who decide who wins this argument. If they stay in the shadows for the rest of the year, the complacency falling over a great deal of America may continue to spread. If they show themselves, Obama will be revealed in an instant as exactly the wrong choice for the times in which we live.