H. Sterling Burnett
|
Posted: Aug 16, 2019 12:01 AM
Share   Tweet
The opinions expressed by columnists are their own and do not necessarily represent the views of Townhall.com. 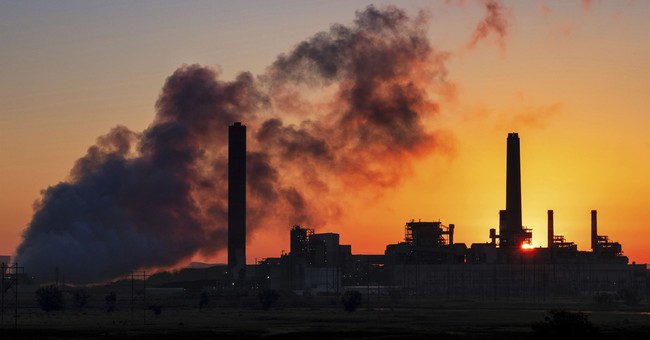 Hard data, collected over decades, show no increase in the frequency or severity of hurricanes over the past century. Additionally, droughts are not more common, severe, or of greater length. In fact, as climate researcher Roger Pielke, Jr. recently reported, May 15, 2019, marked “the first time in the record that [more than] 90 percent of the US has experienced conditions of NO drought.”

In recent decades, flooding has become more common in some places, while it has declined in other regions. Yet evidence indicates manmade land alterations, such as channelizing streams and rivers and filling areas with impervious surfaces (concrete, buildings, and parking lots) are mostly responsible for the flooding, not modestly warmer temperatures or increased rainfall.

Although severe weather events have not become more extreme, the mainstream media and environmental zealots have resorted to endless fearmongering campaigns to make the public believe this is happening because of climate change. Of course, their goal is to convince the public that the only solution (to this non-existent problem) is government intervention to halt people’s use of fossil fuels. As usual, the fake news media is wrong.

In actuality, the world’s inhabitants have always suffered through extreme weather events. Like death and taxes, this trend will likely never cease. The real question is, can anything be done to reduce the harm from extreme weather or other natural disasters when they occur? To answer that, we should ask if there are nations where people are better able to cope with extreme events than others? Unsurprisingly, the answer is a resolute “yes.”

For example, it is not uncommon for tens of thousands of people in modern-day Afghanistan, Indonesia, Nepal, and other developing countries to die when earthquakes strike. However, when earthquakes of similar or even greater magnitudes strike Japan, New Zealand, or the United States, nation’s regularly beset by tremblors and earthquakes, they often result in very few, if any, deaths. At most, dozens to hundreds are killed when earthquakes strike in many developed countries. The 9.1 magnitude Tohoku earthquake that hit Japan in 2011, the fourth most powerful earthquake ever recorded, was a unique exception to this general rule.

When cyclones strike India or islands in the Indian Ocean, it is not uncommon for hundreds or even thousands of people to die during the storms or in their aftermath. However, when similarly powerful hurricanes strike Japan or the U.S. mainland, the death toll is commonly fewer than 10 people. Rarely do more than a couple of dozen people die; Katrina, a particularly powerful storm in 2000, being a rare exception.

And when a drought strikes sub-Saharan Africa, Asia, or the Middle East, hundreds of thousands of people might die from starvation or malnutrition. When droughts strike Europe or the United States, food supplies remain plentiful.

One factor we can rule out for differences in outcomes from natural disasters is climate. There are no significant temperature differences; differences in non-seasonal occurrences or severity of drought, flood, or storm events; or significant geologic differences in the earthquake or volcano zones affecting the disparate regions.

A country’s level of wealth and development is almost entirely responsible for the depth of suffering its peoples experience during and after natural disasters.

Wealthier countries are simply better able to cope with natural disasters when they occur.

Fossil fuels—the foundation of modern agriculture, communications, infrastructure, medicine, and transportation—are largely responsible for the declining impact of extreme weather events. Fossil-fuel use has contributed to more than a doubling of the average human lifespan, a steep decrease in poverty, and a huge increase in global food supplies over the past century.

Climate alarmists’ answer to the problem of extreme weather events is to kill the goose that laid the golden egg by rapidly ending the use of fossil fuels. Yet, even under the most optimistic (and unrealistic) scenarios, rapid decarbonization will, at best, have a minimal impact on the severity of future extreme weather events. In other words, decarbonization won’t reduce the destruction and deaths wrought by natural disasters.

Today’s poor deserve the chance to live like people in the developing world do, not as their ancestors have done for millennia, toiling in poverty, just one storm or drought away from death. Only increasing wealth and development can deliver them from this fate. And, with present knowledge and technologies, only by using abundant fossil fuels can they generate such wealth for the foreseeable future. The evidence is clear. To significantly decrease the impact of extreme weather events on the most vulnerable populations around the globe, they need to use more coal, natural gas, and oil—not less.