Howie Carr
|
Posted: May 01, 2017 2:45 PM
Share   Tweet
The opinions expressed by columnists are their own and do not necessarily represent the views of Townhall.com. 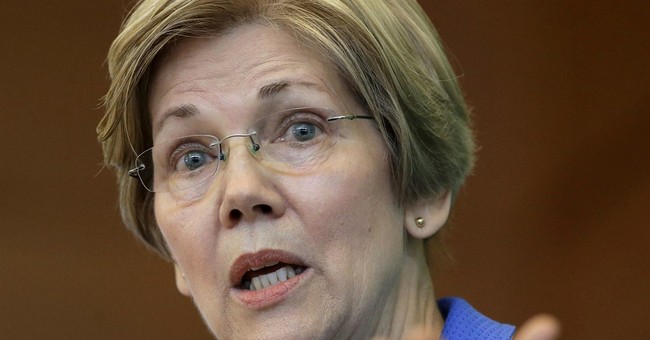 Last Thursday, at the NRA convention in Atlanta, Trump again went after the senior senator from Massachusetts, calling her “Pocahontas.”

As usual, the alt-left twitter-verse went crazy, accusing Trump of “racism” for poking fun at her now-abandoned claims of Native-American ancestry.

But the fact is, Warren did for a period of time in her adult life claim to be of Cherokee ancestry, during which time she was hired to tenured faculty positions at two Ivy League law schools, Harvard and the University of Pennsylvania. Both prestigious schools proudly touted her as a “woman of color.”

But in 2012, when she first ran for the U.S. Senate, pointed questions were raised about whether or not she actually qualified for affirmative-action status. By all indications, the answer is no, which may be why neither she nor the Ivy League law schools where she was granted tenure have ever released her employment applications, which would finally answer the question of whether or not she “checked the box.”

Instead, Warren has claimed that it was family “lore” during her childhood in Oklahoma that she had Indian blood. One of her grandparents, her “paw-paw,” told her that she must be Indian because of her “high cheekbones.”

Pressed by the media, Warren also cited her contributions to a purported Native-American cookbook, Pow Wow Chow, which was privately printed. But a Google check showed that she apparently plagiarized at least two of her four recipes from Pierre Franey, a haute-cuisine French chef once employed by The New York Times. One of Warren’s alleged Native-American recipes, cold crab omelet, is not commonly associated with the Cherokees’ trek west on the Trail of Tears in the 1840s.

A third of Warren’s “Indian” recipes appeared to have been lifted from an issue of Better Homes & Gardens magazine from 1959.

During the 2012 campaign, Warren also claimed that her parents had to elope because of the anti-Indian prejudice against her mother. But that narrative collapsed after it turned out that her parents had actually “eloped” to get married one Saturday afternoon in the leading Protestant church in the neighboring town in Oklahoma, after which they returned home to a gala wedding reception in their hometown that evening.

Another check of Oklahoma newspapers at the turn of the 20th century indicated that in fact one of her “Okie” ancestors had actually shot an Indian off his horse as he attempted to flee after assaulting another of her Caucasian kinsmen.

After the initial media accounts pointing out the discrepancies in her ever-shifting stories, Warren claimed that she was 1/32nd Cherokee. The New England Genealogical Society found no such evidence. Nor did Cherokee genealogists. But it was all part of a pattern of less-than-truthful behavior by Warren. She initially claimed to have provided the “intellectual foundations” for the Occupy Movement, then later denied saying it until she was confronted with video.

On MSNBC, she denied holding any stocks, saying that all she owned were “mutual funds.” She called for higher taxes, even though it turned out she had been in arrears on her own automobile excise taxes in the City of Cambridge, and that she refused to voluntarily pay a higher income tax rate in Massachusetts, as is allowed under state law.

Despite the attempts of the local broadsheet, the Boston Globe, not to cover the embarrassment of Warren’s “Indian” ancestry, the conservative media has kept it front and center.

Her nicknames include “Lieawatha,” “Chief Spreading Bull,” “the Fake Indian” and “Fauxchahontas.” Trump, however, prefers to call her “Pocahontas.” He never fails to get a hand from his own audiences, and the reference invariably stirs up “the Resistance,” which appears totally oblivious to the tangled web their heroine has woven for herself over the years.

Now she is out promoting her latest book, “This Fight is Our Fight: The Battle to Save America’s Middle Class,” which contains not a single word about her now-discredited Native-American heritage.

One would have assumed she or her handlers would have developed some snappy comeback to the inevitable questions about her checkered ethnic claims, even though she seldom ventures outside the fawning very-fake-news media precincts. But on Friday night, she showed she is still totally unprepared, even with adorning fan Bill Maher, to deal with even the most-gentle mentions of the controversy.

F. Scott Fitzgerald once said that there are no second acts in American lives. That is obviously no longer true, but sometimes a politician cannot overcome a scandal, for whatever reason. One thinks of Gov. Howard Dean’s scream, or ex-Rep. Anthony Weiner’s sexting scandals, or Gov. Chris Christie’s “Bridgegate.”

Increasingly, Sen. Elizabeth Warren’s prevarications about her ancestry are looking like her own personal version of Custer’s Last Stand.