The Triumph of Hope over Experience 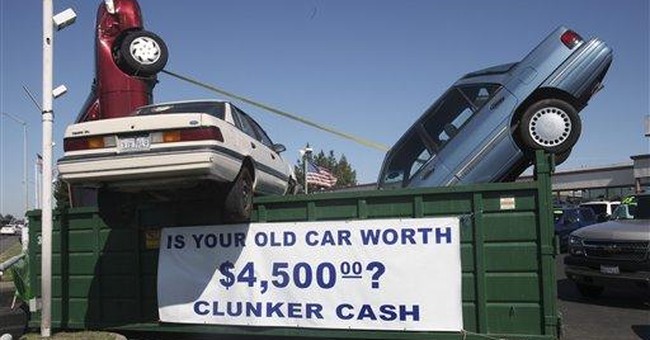 With less than 8 days of fan fare and excitement, the Cash for Clunkers program started and appears now to have ended. According to Transportation Secretary Ray LaHood, "If we don't get the $2 billion from the Senate, we would have to suspend the program." The program in question gives consumers up to $4500.00 in rebates if they trade in a car with poor gas mileage. Supporters claim the popularity of the program is evidence of its success. Others aren't so sure. They think it reveals a woeful inability of government bureaucracies to predict and administer economic assistance for the American economy. Originally the program creators predicted the funds would last through November. Since supposedly basic math skills were all that would be required to make projections on the program's timing, how could the program have run out of money in a week?

When surveys say Americans have high levels of skepticism about the ability of Washington to respond to the economy's morass, perhaps the Cash for Clunkers gives some insight into that sentiment. Increasingly, Americans recognize that the economic downturn we are experiencing is greater than any we've faced in more than a generation. Not quite a depression, some economists are now referring to it as the Great Recession. Its impact is powerful and comprehensive. As American households across the nation gear up for the long haul, many are wondering why Washington hasn't gotten the message that a real change in policy direction is needed, particularly when it comes to the American auto industry.

After spending billions on Chrysler and GM directly, enacting the "Cash for Clunkers" bill, and with little to show for their efforts so far, Washington is undaunted. In addition to talk of extending the clunkers bill, they are pushing for bailouts for the dealers whose hardships they created, as well as promoting "technology" loan assistance to Ford Motor Company - the one remaining member of the Big Three that hasn't already been tainted with federal control via government subsidy.

Notwithstanding the over-regulation and litigation that has made the auto industry particularly vulnerable during this economic downturn, rather than make problems worse with more of the same from Washington, Congress should focus on consumers and competition - forces that actually have the power to turn-around this industry.

It simply is not true that federal policy requiring ever-greater fuel efficiency and emissions reductions line up with the interests of the buying public. One glaring fact is that, for the last 15 years, the single best selling vehicle in the U.S. has been that paragon of fuel efficiency, the American pick-up truck. Yet Washington still insists that automakers must focus ever-greater efforts on selling smaller, lighter "enviro" friendly autos regardless of consumer interest.

Derided as "automotive birth control" by car aficionados, these Washington mandated vehicles have been seen by the auto buying public (particularly in the exurbs) as unattractive, unsafe, slow and incapable of meeting the basic transportation needs of working families. Consider: every Toyota Prius, the icon of fuel efficiency, is sold at a loss. In other words the other cars Toyota sells subsidize the cost of making the Prius available to the public. Even when gasoline was over $4 a gallon Toyota couldn't profitably sell the Prius. On the other hand pick-up trucks, SUVs and sports cars are much more profitable to make than hybrids and they outsell the hybrids by nearly ten to one.

Continuing mandates that ever greater percentages of the new vehicles manufactured must be either hybrids and/or emissions free vehicles can only be considered what economists call the "the Triumph of Hope over Experience." This mindset is damaging to the auto industry and to the taxpayer.

Yet Washington continues with its agenda - piling up one initiative to prop up another. When the public raced away from GM over news of its impending government takeover, the White House announced that the federal government would back the warranties of all GM vehicles. This is exactly the wrong message.

One key means of restoring consumer confidence is to shift away from government involvement and instead encourage competition among dealers and after market (independent repair) service providers. Rather than having U.S. government infused in the automotive industry, we should lower the costs of servicing and maintaining all vehicles -- new and old.

A measure before Congress called the Motor Vehicle Owners' Right to Repair Act should be placed on the front burner. This bill would ensure that both dealer and aftermarket (independent) repair shops can provide automobile repair service.

Keeping the monopolistic practice in place-allowing automobile manufacturers to restrict repair information so that only dealers can provide repair services while pushing for a dealer bailout-will only undermine consumer confidence as they watch their taxes rise while seeing no relief in terms of repair costs.

Because new cars and trucks are increasingly sophisticated, virtually every aspect of the vehicle is either monitored or controlled by computers. The upside is that these vehicles are far more efficient, environmentally friendly and reliable than ever before (and would be so even without the government mandates).

But the systems necessary to keep them in safe and efficient working condition require access to complete and accurate repair information from the car companies. The auto industry has refused to make this information available outside of their dealer network, even on a fee basis.

The costs to car owners when they have their vehicle repaired at the dealership is estimated to be as much as 34 percent higher with labor and parts charges, according to a study comparing dealer repair tags with those of an independent service center. And the problem is worse for those who live in rural areas as the added cost of gas and travel time to the nearest dealership is an additional burden.

As for safety -- competition in auto repair would improve it. Consider: some newer vehicles are not getting properly serviced at all as job layoffs and recession worries cause owners to delay or put off altogether a costly dealer servicing visit. While the monopolistic requirement that these services happen at a dealership may have been overlooked during a boom time, now that the taxpayers are subsidizing the automobile industry, this practice must come to an end.

In conclusion, in essential respects, U.S. policy towards the automakers is shortsighted and, in most respects, unlikely to accomplish any objective other than saddling the taxpayers with ever-greater levels of debt. Washington should consider that competition, not government monopolies, are what made America great.

After dismal car and truck sales in 2008, and with demand off more than 33 percent in the first three months of this year already, unless we want to witness the ultimate demise of the American auto industry, a new focus on competition and consumers must be a priority.