To Change Our 'Culture of Contempt,' Arthur Brooks Suggests All of Us 'Love Your Enemies'

Helen Raleigh
|
Posted: Mar 20, 2019 12:35 PM
Share   Tweet
The opinions expressed by columnists are their own and do not necessarily represent the views of Townhall.com. 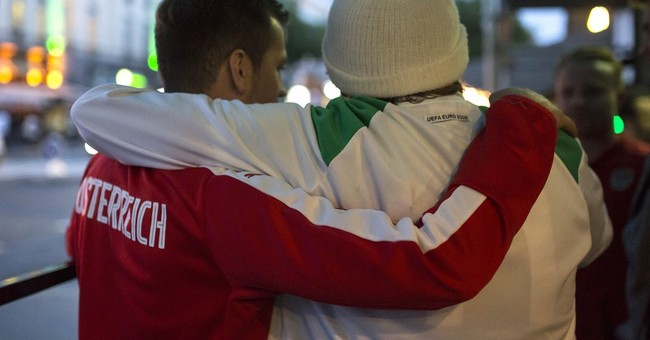 America is more politically divided than ever. According to a 2017 Reuters/Ipsos poll, "One in six Americans has stopped talking to a family member or close friend because of the 2016 election."  The New York Times reports: "A couple in Georgia, married two decades, won’t speak when the husband leaves his unwashed mug supporting President Trump in the sink; his wife refuses to touch it...A mother in New England sought the help of professional conflict mediators during the holidays because her two daughters — one who was pro-Trump, the other anti-Trump — had stopped speaking to each other."

The division, tension, and anger that Americans have for our fellow citizens who share different political views is not news. The question is what we Americans should do about it. Plenty of books came out after 2016 lecturing us to be more civil and tolerant. Arthur Brooks, president of American Enterprise Institute, says that being civil and tolerant isn't enough. As a matter of fact, he thinks that merely calling for more civility and tolerances is setting a low standard.  In his new book, Brooks prescribes something more radical: if we want to save America -- we need to "love our enemy."

At the beginning of the book, Brooks points out that today in America, there is an "'outrage industrial complex' that prospers by setting American against American, creating a 'culture of contempt.'" In his view, when you are angry with someone, you still want to engage. But contempt is worse than anger because "contempt represents not merely an outburst following a moment of deep frustration with another but rather an enduring attitude of complete disdain."  So when you treat someone with contempt, you don't want to engage with that person any longer because he/she is so beyond reason that they aren't worth your time and effort.

But when you feel contempt for someone, you not only hurt that person emotionally, but also hurt yourself too. Brooks quotes a scientific study which shows that treating someone with contempt "causes us to secrete two stress hormones, cortisol and adrenaline," which are harmful to our own health.

So how do we break the "culture of contempt?" Respond with love. The title of Brooks' new book came from the Bible. In both the Gospel of Luke and the Gospel of Matthew, Jesus said, “Love your enemies, bless them that curse you, do good to them that hate you, and pray for them which despitefully use you, and persecute you." No doubt this sounds like a tall order.

Brooks explains that the love he advocates is not some kind of warm and fuzzy feeling, but as Saint Thomas Aquinas once said, "To love is to will the good of the other." Brooks doesn't ask anyone to give up their political beliefs. As matter of fact, he thinks if you believe you are right, you have a duty to stick to your view. When Brooks talks about love, he means that we should not only "listen to our hearts," but also "think clearly, look at the facts, and do difficult things when necessary, so that we can truly lift people up and bring them together."

Brooks premises his book as a how-to guide on loving your enemy. Therefore, he prescribes a few things we can practice based on ancient wisdom, scientific research and real life examples. Among all his recommendations, three things speak to me the most.

The first thing Brooks recommends is to "Practice Warm-Heartedness." This was the response the Dalai Lama gave to Brooks when Brooks asked his Holiness what to do about contempt. How to practice warm-heartedness? The Dalai Lama further explained: "Think back to a time in your life when you answered contempt with warm-heartedness. Remember how you feel, and then do it again."

In his book, Brooks gives an example of his own. Once he received an email from a reader who criticized every chapter of his book. Brooks faced three options: ignore him; write back to insult him; pick some faults in the email and destroy the email's author. Instead, Brooks chose a fourth option. He wrote back to thank the email's author for reading his book. The email's author was shocked because he didn't expect to hear from Brooks at all. So he wrote back to invite Brooks for beer next time when Brooks was in his neck of the woods. Brooks' conclusion from this experience? It was the practice of this warm-heartedness that broke a possible cycle of contempt, which left both Brooks and the reader feeling good about themselves and the other person despite their disagreement.

As a political opinion writer, I have received my fair share of nasty emails. The far right tells me to go back to where I came from (usually including a few F bombs), while the far left tells me that my conservative beliefs are a betrayal to my skin color and race, or I am too "whitened" to be saved.  I usually ignore them, considering answering them a waste of time. After reading this book, I decided to challenge myself that next time when I receive a nasty email-- try to respond with warm-heartedness. I will let you know how it turns out.

The second thing Brooks recommends is "attitude follows action." The traditional belief is that action follows attitude. If you do something that makes you happy, you probably have a big smile right now. But that's not the whole story. The "self-perception theory" states that when you act "as if" you feel a certain way, you will truly feel that way after a while. For example, if you smile long enough and often enough even though you don't feel like it initially, you will find yourself happier and nicer after a while. This theory has been scientifically proven again and again by scientists from the '70s to early 2000s.

What does this theory have anything to do with breaking the "culture of contempt?" Brooks believes that if you "pretend you have an innate sense of brotherhood and solidarity even if you don't; act like a uniter even if you don't feel like one. Eventually your attitude will follow your action." In other words, fake it till you make it. You will not lose your authenticity by doing this type of "fake." Rather, when approaching someone you disagree with, the more you act like the person you want to be--nice, warm and kind, the less enmity there is and the more likely you and the other person are to engage in a respectful conversation rather than treating each other with contempt.

Among all Brooks' recommendations, I find this one to be the easiest to practice. After all, our own action is one of the few things in life we can control. In most human interactions, people tend to mirror each other's emotion and behavior. So if you want other people to treat you nicely, you'd better act nicely to begin with, like my mother always tells me, "You catch more flies with honey than vinegar."

The third thing Brooks recommends is "Don't disagree less, but disagree better." In the eighth chapter titled, "Please Disagree With Me," Brooks quoted from Aristotle's Nicomachean Ethics to describe the highest level of interpersonal relationship, whether a friendship or a marriage, which is the kind that both parties involved have "a shared passion for the good of the other and what is right and true." The real life example he gives is the friendship between Robert "Robby" George and Cornel West. Both are professors at Princeton University, the only thing these two gentleman have in common. George is a well known conservative Christian intellectual and West is a prominent progressive thinker. They disagree on almost everything, yet they call each other brother and revel in their disagreement. In a joint statement these two gentlemen issued in 2017, they declared that respectfully engaging people who we disagree with "protects us against dogmatism and group think, both of which are toxic to the health of academic communities and to the functioning of democracies."

"Loving your enemy" is not about avoiding disagreement. Rather, it is about disagreeing better.  So how can the rest of us disagree better? Since this is a how-to book, Brooks recommends five rules of disagreement. The one I like best is "use your values as a gift, not as a weapon." Too often, people on both sides of the political spectrum treat the other side with contempt because each side feels morally superior to the other side. As a result, each side weaponizes their values, energizing their bases but failing to win over people in the ideological middle and those who uphold different values. In Brooks’ words, "values are supposed to be positive... It's impossible to maintain the moral content of our values and use them as a weapon at the same time." Since no one has ever been insulted into an agreement, let's try not to weaponize our values.

"A house divided cannot stand," which is why "Love your enemy" is a timely book. Our nation needs healing from bitter divisions and we need to get away from treating our fellow Americans with contempt.

I’ve met Mr. Brooks several times. He acknowledges that "loving your enemy" is not something easy to do. It takes a lot of practice. One thing that makes him such an inspiring public figure is that he practices what he preaches and he leads by example. Not all of us can rise up to his level, but his new book shows what we all can do to be better people and bring our country together. I'm inspired by his words of wisdom. I hope you are too.