If the World Follows US' Lead, We Can Reduce Emissions Without the Paris Accords

Helen Raleigh
|
Posted: Jun 10, 2017 12:01 AM
Share   Tweet
The opinions expressed by columnists are their own and do not necessarily represent the views of Townhall.com. 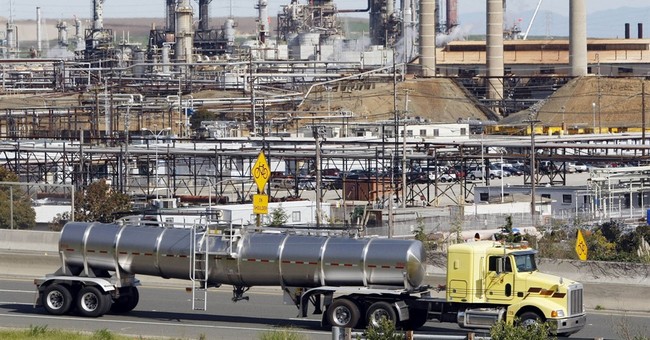 One of the silliest arguments made by some Paris Accord supporters is that pulling out of the accord would weaken the U.S.' global leadership because more than 140 countries, including North Korea signed on to it. Seriously? I'd like to ask them why the United States wants to follow the lead of North Korea on any matter. Truth be told, we should always do the exact opposite of whatever North Korea is doing. In addition, this "everyone else is doing it so should we" argument reminds me of something my mother used to say, "Should you jump off the bridge simply because everyone else decides to do it? A silly idea is a silly idea, no matter how many people are willing to embrace it."

Let's get real here. The Paris Accord will not save the planet for many reasons. Notably, it takes the same old approach that historically has failed to reduce greenhouse gas emission -- aggressively replacing fossil fuels and nuclear energy with renewable energy sources. Exhibit A is Germany. By closing down nuclear power plants and increasing its reliance on wind and solar power, the greenhouse gas emissions in Germany actually increased because Germany has to rely on building more coal plants as back ups to its unreliable renewable energy. Another side effect of this process is the high energy cost German businesses and people have to bear. While the government subsidizes large businesses,

Above all, the Paris Accord isn't a legally binding agreement. It has no teeth to enforce its emission reduction goal to any member state. Therefore, the country that generates the most carbon emissions on the planet, China, is free to set its own time table. Naturally, China pledged to begin reducing emissions by 2030. As recently as 2013, the amount of carbon dioxide China is estimated to have released is "nearly twice as much as the US and around two and a half times the European Union."

While according to China's own report it's carbon emissions have experienced zero or slightly negative growth since 2013, many believe it has more to do with China's slowing economic growth reducing the demand for coal. As a result of the downturn, China's coal plants are running at 50 percent capacity. But as Chinese President Xi continues pushing his ambitious "one belt, one road" initiative which aims to build many infrastructure projects from Asia to Europe, demand for coal and output from China's other heavily polluting industries such as steel and cement will go up.

It's true that China has built impressive renewal energy capacity in recent years, but such capacity is underutilized due to a host of reasons, including poor infrastructure that isn't up to the task of transporting renewal energy from where it is generated to where it is needed the most. Idled wind farms have become a common eye sore in China.

Did President Trump hand over the global leadership role to EU & China by pulling out of the Paris Accord? Hardly. EU & China failed to issue a much-anticipated joint statement on cooperation to fight climate change due to mistrust on both sides over a range of issues, including trade disputes.

If the rest of the world truly cared about our planet, it should follow the U.S.' example. We're the only country that has been reducing carbon emissions while growing the economy at the same time, thanks to fracking, which brought us an abundant supply of affordable energy such as oil & natural gas. The U.S.' shift from burning coal to natural gas counts for 2/3 of the emission reduction. An MIT report shows "In 2015 the economy was 15 percent larger than in 2005, but the country (US) emitted 23 percent less carbon dioxide per dollar of GDP last year compared with 10 years prior." Few people recognized that the reason the fracking revolution took place in the U.S. is not because the U.S. is lucky, but because of the free market and property rights protections that enable entrepreneurs to take risks and be as creative as they can be. Look around, the countries and regions that have the worst environment are the places that have weak or no property rights protections and centralized planning economy.

Now further technological innovation allows the U.S. to share the benefits of fracking with the rest of the world. For instance, U.S. entrepreneurs found a way to turn natural gas to its liquid form, which means it now be can transported from one continent to another by tankers rather than relying on pipelines alone. According to a Wall Street Journal report, many U.S. energy companies have converted their import terminals to export terminals and the U.S. is expected to become a net gas exporter by 2018. This has huge implications around the world from economic, environmental and geopolitical perspectives. Imagine China importing our natural gas, which could be the only thing to keep the Chinese economy growing and curtail toxic smog so Chinese people can breathe cleaner air without wearing masks. Imagine Europe importing our natural gas, which will reduce its reliance on energy piped from Russia, and in turn, strengthening Europe's defense against Russia's aggression. Imagine Russia losing its leverage and starting to behave as a more responsible member of the global community.

The Paris Accord won't do much to either reduce emissions or save our planet. With U.S. leadership, we can.