Three Steps to Deal With Illegal Immigration in the U.S. and Citizenship isn't One of them

Helen Raleigh
|
Posted: Sep 17, 2016 12:01 AM
Share   Tweet
The opinions expressed by columnists are their own and do not necessarily represent the views of Townhall.com. 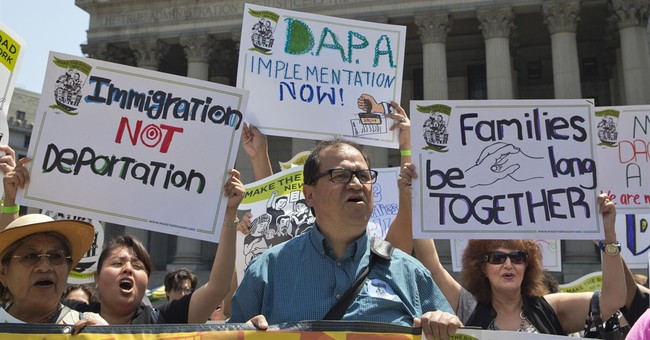 How to deal with approximately 11 million illegal immigrants in this country is no doubt the hot campaign issue in 2016 and likely will determine the outcome of this presidential race.  The Democrats insist the only way to move forward is to grant illegal immigrants a path to citizenship. That is a simple but false solution because it isn't supported by historical facts as well as what incentivized illegal immigrants to be here to begin with.

These data shows that evidently, citizenship is not something motivated many immigrants, legal or illegal. Not surprisingly, past effort to grant legal immigration status to illegal immigrants failed to stop the inflow of illegal immigrants as promised. The clearest example was President Reagan's Immigration Reform and Control Act of 1986, which offered three million illegal immigrants amnesty. The number of illegal immigrants continued to climb since the law's passing. According to Pew Research, the unauthorized population grew by an average of a half million a year between 1990 and the mid-2000s and peaked in 2007 at around 12 million.

Although close to 45% of illegal immigrants come from Mexico, Mexicans’ share of illegal immigrants peaked in 2007 and has been declining since. Ana Gonzalez-Barrera from the Pew Research Center estimated that there were 140,000 fewer Mexicans living in the U.S. in 2014 than in 2009, and that the net flow from Mexico to the U.S. is now negative. She credited the decline to the U.S.’s economic recession in 2008 and the improving Mexican economy at the same time.

Obviously, many illegal immigrants are economic migrants who came here to find a better job and a better life, but not all of them want to stay in the U.S. for the rest of their lives. Many wouldn't have brought their families here if they can travel back and forth between U.S. and their home countries without worrying about being stopped at the border.

History shows granting temporary work visas to economic oriented migrants is the best way to reduce the incentive and the numbers of illegal immigrants.

When World War II created a labor shortage in the U.S. after many American men were drafted into the U.S. Armed Forces. the U.S. and Mexican governments created a temporary program to bring Mexican agricultural labor into the U.S. On August 4, 1942. The program was officially referred to as the Mexican Farm Labor Program, but most people know it as the Bracero Program (bracero in Spanish means “manual laborer”). The Bracero Program wasn’t an immigration program. It allowed Mexicans to legally take temporary agriculture work and, later, railroad work in the U.S. with nonimmigrant status.

The program lasted until 1964. Between 1942 and 1964, over 4.6 million Bracero labor contracts were signed. During which period, the number of illegal immigrants was reduced by 90%. It’s not difficult to see why. There were no legal hurdles for Mexican workers to get a work visa, which greatly reduced the incentive to cross the border illegally. There were few compliance requirements for U.S. farmers, and with a guaranteed supply of legal workers, there was limited demand for illegal workers.

Therefore, the solution to illegal immigration already in the U.S. can be as simple as three steps and granting citizenship isn't one of them:

Step 1. Illegal immigrants who can show they currently are employed and with no criminal record should be granted temporary work visas after they pay a fine. A work visa will allow the visa holder to work legally in the U.S., paying income taxes and traveling in and out of the U.S. with no constraints. These benefits should meet what most illegal immigrants are seeking. But because a work visa is not an immigration visa, the visa holders will still be considered non-resident aliens and therefore will not have access to federal means-tested welfare benefits. The work visa will be good for three years and can be renewed as long as the applicant is employed.

Step 2. If illegal immigrants have brought their families with them, they ought to pay a fine for their families too. Their family members, excluding children who were born here, will get temporary visitor visas. The length of their visa should be the same as the working visa, and they can renew their visas as long as their primary family member’s work visa is valid. Since a visitor visa is also a non-immigration visa, these visa holders will not have access to federal means-tested welfare benefits either. If any these illegal immigrants want to become legal permanent residents, they will have to go through the same application process as other legal immigrants.

Step 3. Any illegal immigrant who has a criminal record, including creating a false identity or using a fraudulent Social Security number, will be deported immediately and will not be eligible to apply for any U.S. visa for five years.

We know how to solve our illegal immigration problems. These ideas have been around for many years. What we have been lacking are a political will to do the right things and someone who can articulate these solutions in simple and candidate manner that will win support from most of the Americans.

De Blasio's Vaccine Mandate for the NYPD Just Got Blocked
Katie Pavlich
The Supreme Court Commission Has Finished Its Report. Here's What It Concluded About Court Packing.
Leah Barkoukis