Environmentalism is the "New Age" Socialism 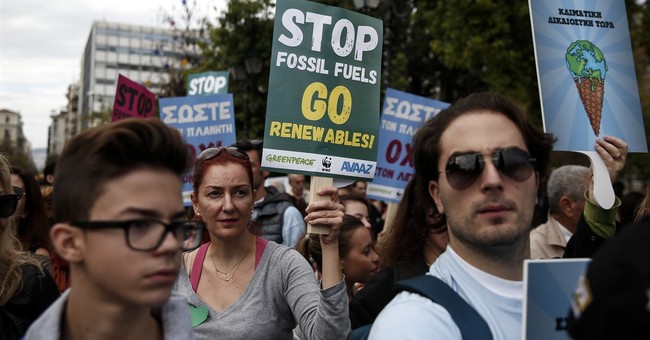 At the beginning of this week, the rich and powerful from around the world, congregated in Paris, a city that was under terrorist attack just a few weeks ago, to discuss a solution to an imaginary enemy who is "worse" than terrorism--climate change. Other than emitting a lot of hot air, no one expects any meaningful outcome from this conference that will benefit the vast majority of people around the world. But to the environmentalists, this gathering marks their triumph.

Deep down, environmentalism isn't about saving the planet, but is a disguised anti-Capitalism movement and it's most vocal advocates won't deny their true intention. I have travelled around the world and I noticed that the freer the country, the better quality of the air one breathes. Anyone who wants to save the planet should promote freedom, private property rights and voluntary exchange. In a word, if you want better environment, embrace capitalism.

Comparing environmentalism and socialism side by side, you can see many similarities between these two ideologies:

Both were created by elitist intelligentsias who believed they have the moral responsibility to save the masses who are too dumb for their own good. For our own benefit, the benevolent elitists decide how to best organize the economy and live our lives. Both ideologies rely heavily on the power of the State to impose their visions on everyone else. For instance, socialism organizes the means of production and distribution of outcomes through central planning; while environmentalism demands government regulations to enforce their ideal way of living upon everyone else and punish anyone who doesn't obey.

Both treat Capitalism as their worst enemy. Both believe Capitalism to be responsible for many problems in this world: depleting the earth’s resources, damaging the environment, exacerbating poverty and class struggle. The very reason of Socialism's existence is to abolish Capitalism; while the environmentalists believe the future is a choice between Capitalism or a habitable planet-you can't have both, even though actual historical data shows otherwise: people are healthier, happier, wealthier, and live longer today, compared to decades ago, thanks to the spread of free markets and economic freedom. Capitalism is about choice, while environmentalism is about control.

Both are bent on enforcing conformity with any means necessary. Socialism enforces conformity through rationing necessities and thought-control via reeducation camps. Environmentalists have declared the end of discussion on the validity of climate change because "the science is settled." Anyone who dares to question climate activists' data, logic and accuracy is automatically denounced as a science denier. But the very nature of science means it is never settled. It is constant inquiry, as the greatest scientist of the 20th century Albert Einstein famously exclaimed, "the important thing is never stop questioning."

Both are willing to sacrifice the most vulnerable people for the "greater good. "The history of Socialism was written in the blood and tears of millions. Environmentalism, from its infancy in early 20th century, saw itself as having "the responsibility of saying what forms of life shall be preserved." The arrogance of these elitist intelligentsia is on full display at the Paris climate conference where the pledge is to limit global warming to less than 2 degrees Celsius above a preindustrial level.

I'd be interested in knowing how many of these elitists would be willing to have a standard of living at the preindustrial level. Do they realize "preindustrial" life means giving up their private jets, their air-conditioned rooms and their Apple watches because none of these existed pre-industrial revolution?

Does any environmentalists realize that, even in 2015, there are still people sustaining on a pre-industrial standard of living? According to 2012 data from the World Health Organization’s website, “Around 3 billion people still cook and heat their homes using solid fuels (i.e. wood, crop wastes, charcoal, coal and dung) in open fires and leaky stoves. Most are poor, and live in low- and middle-income countries. 4.3 million people per year die prematurely from illness attributable to the household air pollution caused by the inefficient use of solid fuels." In India alone, over 300 million people have no access to electricity. If these people can have access to oil and gas now, it will fundamentally change their lives for the better forever. To deny them their access to fossil fuels is no different than condemning them to eternal poverty.

Even in developed countries like the U.S., wrong-headed environmental policies have the most devastating impact on ordinary people. For example, the EPA's regulation on carbon emissions forced many electric utilities to shut down coal-fired power plants. The Wall Street Journal reported that since 2009, "332 coal mines in West Virginia have been closed and 9,733 jobs have been lost. Of West Virginians over the age of 16, only 53% have a job or are looking for work."Of course, the rich and powerful are exempt from any of the rules they set for everyone else. At the Paris climate conference, while Obama lectured the world on the importance of cutting CO2 emissions, he neglected to mention that his Paris trip will send more CO2 into the atmosphere than 31 American homes' energy usage for an entire year.

As C.S. Lewis wrote in his essay "God in the Dock" that "of all tyrannies, a tyranny sincerely exercised for the good of its victims may be the most oppressive... those who torment us for our own good will torment us without end for they do so with the approval of their own conscience. They may be more likely to go to Heaven yet at the same time likelier to make a Hell of earth."

Environmentalism is the "new age" socialism and the overzealous environmentalists are the kind of tyranny we all should be very wary of.