After Massachusetts: Now What? 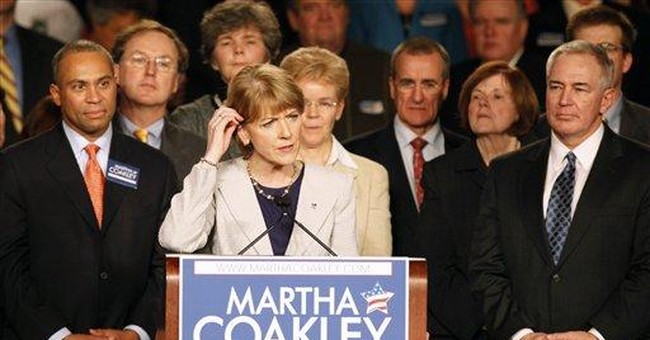 The lessons of Massachusetts are not quite as obvious as they first appeared. The election holds a cautionary tale for both parties.

To better understand what really happened, the Independent Women’s Voice commissioned an in-depth statewide survey of those who voted in the special election to fill the late Sen. Ted Kennedy’s seat.

Let’s dispel one bit of spin and then look at the key issues and voting trends.

Martha Coakley wasn’t the Democrat’s problem. Her gaffes provided fodder for comics, but voters resoundingly said their vote was about issues; for 80% of Brown voters, it was about opposing the Obama agenda; for 81% of Coakley voters, it was about supporting it. The type of candidate each proved to be may have been a reason for not voting for them -- 24% in Coakley’s case, 11% in Brown’s-- but even among those voters, the candidate's agenda was dramatically more important to their decision.

Being the 41st Senator was the driver in this election – for both sides. In Massachusetts, all politics was suddenly national: 86% of voters said that that 41st Senate vote was important to their decision; knowing that their vote could make a difference in critical Washington policy debates almost certainly drove turnout for both sides.

That spread gets even wider when one looks at Independents, whose oppose/support numbers for the legislation came in at 57%-34%. Even while women overall favored the healthcare legislation by 53%-35%, Independent women opposed it, mostly vehemently, by a mirror image 55% to 33%.

Among the greatest surprises in the data was the tri-partisan agreement that the status quo on health care has been a failure; just 16% of voters, including 29% Democrats, 8% Republicans, and 5% Independents, recommend Congress proceed as-is.

The real terrorism threat: it wasn’t just timing. Much was made of the importance of the Christmas Day Bomber to Brown’s surge coupled with the initial non-response of the Coakley campaign. Indeed national security was an important issue for 63% of voters, including 75% of independents and 82% of Republicans. But well over half of Brown’s voters had made up their minds by early December, and for 69% of them this issue was already a priority before Christmas. The implication? Transfers of terrorists to U.S. soil and decisions to have them tried in criminal courts are going to continue to cause trouble for Democrats.

It’s the economy, stupid. PS: Tax cuts rule. Eighteen percent of voters said jobs and the economy were top issues; an additional 62% placed economic issues in the top three. Given a given a choice between continuing to have the federal government spend money versus yanking the congressional credit card and cutting existing programs, 56% chose the latter, including 65% of Independents. Additionally, 82% of voters across the board think that providing tax cuts to small businesses for job creation will speed up the recovery – including 79% of frequent Ted Kennedy voters.

2010 elections: Independents, and particularly Independent women, matter. Large majorities of Republicans and Democrats cast votes along party lines for their candidates. But while women overall voted 53%-45% for Coakley, Independent women voted 67%-33% for Brown. Given an option between reducing taxes and regulations on small business or increasing government spending, 51% preferred tax cuts while 30% chose infrastructure. On these issues, as well as health care and national security, independent women were lining up closer to Republicans than Democrats, bucking their sex and voting on issues.

Democrat attrition… but no Republican pickup. Here’s the bad news for Democrats but a word of caution for Republicans. When comparing past voting behavior to expected future voting behavior, Democrats suffer a decline of 7 points. The greatest is among Jews (-16), Catholics who aren’t frequent church-goers (-15), union households (-14) and moderates (-13). Yet this doesn’t translate into an increase for Republicans – just a big bump in people saying they don’t know for whom they are going to vote. Indeed Republicans may increase the number of men who vote with them but they may still lose women.

It’s going to be an interesting year.