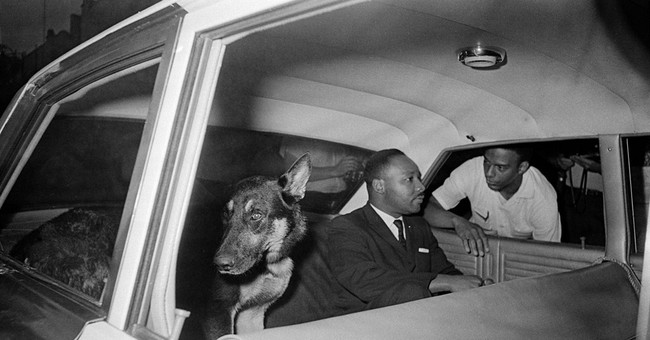 More than ever, I am respectful of those who paved the way for our American freedom. As a history buff, I have read stirring words from the founding fathers that have inspired me to work to maintain what they had first established. And as an African-American, I have received personal benefit from those who fought against slavery and later those who fought for my civil rights. These people may have had their flaws, but they are worthy of my respect.

Since his tragic murder in 1968, our nation has remembered Dr. Martin Luther King, Jr. Since 1983, when his birthday became a federal holiday, we have formally commemorated his legacy on the third Monday of January. The first MLK Day featured events all over the country, and a bust of Dr. King was dedicated at the U.S. Capitol.

Over the years, we have all had different ways of celebrating the man and his message. This year, however, a group planning a party for young people in Flint, Michigan created promotional flyer that featured a photo-shopped image Dr. King’s face on a body dressed with a large gold chain and making a what most would interpret as a gang sign. The name of the party was “Freedom 2 Twerk.”

Understandably, the King family expressed distress at the use of the images. True to the legacy of Dr. King, however, they also expressed compassion for the perpetrators. "I feel like we have failed to reach these [groups]," Dr. Bernice King, daughter of the Civil Rights icon, told FOX 5 Atlanta. "This imagery thing is just appalling, and it's almost embarrassing…[my] father sacrificed everything for them to live a much more dignified and respectful life…”

Dr. Bernice King’s words go right to the heart of her father’s legacy. Today, we tend think of the battle over “civil rights” as a fight over money and privileges. Forgotten in much of the contemporary rhetoric is the fact that the early days of the Civil Rights Movement were simply about demanding that everyone recognize the full humanity of African Americans. In fact the striking sanitation workers in Memphis—the very event where King would speak the night before his death—were carrying signs that simply read: “I am a man.”

The black Americans who marched with Dr. King wore the cleanest, neatest clothes they could afford because they were championing the idea that they were worthy of respect and equal protection under the law. Freedom, as the founders of our country and the Civil Rights leaders understood it, was not a license to behave any way they chose. It was indeed the right to pursue happiness as they saw fit, as long as it did not harm or encumber others. But it was taken for granted that such pursuits would be grounded in self-respect, as well as respect for others. They knew that to be the only way that freedom does not give way to chaos.

Yet since all the legislative gains bought with the blood of Dr. King and many others, it seems there is a movement to diminish the humanity of black Americans again. From obscene song lyrics and videos to sociopathic behaviors featured on the evening news, dress and conduct that would have horrified Dr. King and his followers has been romanticized as what it means to be authentically “black.”

How ironic, as Dr. Bernice King points out, that African Americans fought so hard to be respected as equals, only to have so many of us voluntarily degrade ourselves. In his famous I Have a Dream Speech, Dr. King urged, “We can never be satisfied as long as our children are stripped of their self-hood and robbed of their dignity by signs stating: ‘For Whites Only.’” Yet today, too many of our children are casting their dignity aside. And of course these problems extend far beyond the black community. “Twerking” is just the latest obscene dance trend that seems to have originated in an urban environment and then quickly found its way into nearly every living room in America.

Defenders of the “Freedom 2 Twerk” posters have insisted that its creators meant no disrespect to Dr. King, and ironically, I believe them. I don’t think they were trying to shock or offend anyone. I think they thought they were honoring Dr. King in their own way. Sadly, they are so far removed from what Dr. King stood for that they have no reference point for how horrified he would be at behavior they consider normal and cute. The party planners’ inability to discern how offensive their posters would be is a sign of how far we have fallen.

When asked how she thinks her father would have responded to the images, Dr. Bernice King responded, "My father would have worked to elevate them, to connect with them, and bring them into the movement.” And perhaps the best way to honor Dr. King is for us to do just that.