Get Your Slingshots Ready 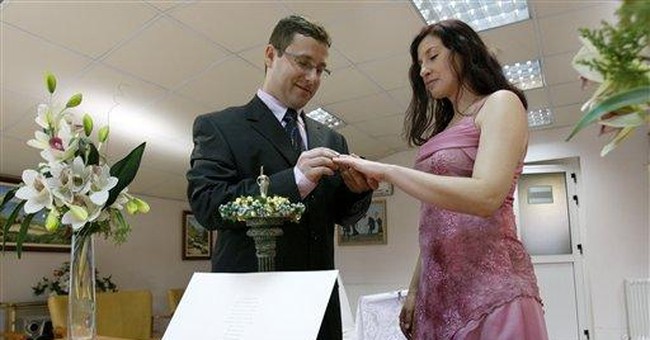 The media would have you think that same sex marriage in the US is inevitable. Gay marriage activists would also have you believe that public opinion has suddenly shifted in their favor. Nothing could be further from the truth. A Pew Research Survey was released last week that shows our citizens’ true views on same-sex marriage. The poll found that 53 percent of Americans oppose allowing couples of the same sex to marry legally. This number is hardly an endorsement of gay marriage.

On the other hand, 57 percent of Americans want to give same-sex couples rights afforded married couples by allowing civil unions. This is a 3 percent increase since 2008. The numbers suggest that this is not a losing battle. We are not ready to give in to a small segment of society who wishes to completely redefine family, marriage and our society.

The battle for marriage reminds me of the battle between the Israelites and the Philistines in the Old Testament. The battle lines were drawn; it was beginning to look like a losing battle. To add insult to injury, the Philistines took to making a public spectacle out of the Israelites by hiring giant mercenaries who taunted the Israeli army daily. The well-known story of Goliath and the young boy David comes from this backdrop. An untrained, under-armored David is sent to fight a professional, gargantuan soldier. As we know from the account, David killed the giant with a mere slingshot and a stone applied to the place where Goliath’s armor was lacking---at the temple.

Our fight for marriage needs a David spirit…one that exudes the belief that a stone placed in the right way can truly make a difference in our battle. We have several stones to choose from: righteousness, truth, and justice.

Truth is also on our side. Studies by sociologists have shown that countries and states that legalized same-sex marriage have noticeable negative changes in the state of marriage and families. Some of these changes to marriage are that fewer people marry, fewer marriages remain monogamous and sexually faithful, fewer marriages last a lifetime, and polygamy becomes an accepted norm. Negative impacts to the family are that many more children would grow up without the benefit of a mother and a father, which has been shown repeatedly to be the best environment for positive development of children, emotionally, intellectually and socially. The truth is that our society, as a whole, will have to bear the economic weight of same-sex couples receiving health and other benefits. The professionals who serve our citizens will be impacted if they refuse to give their services to same-sex couples, even if doing so goes against their belief system. (To see more detail about these issues visit www.thetruthinblackandwhite.org and read What’s the Vex of Same-sex?)

Justice is also on our side. Although it might “sound good” on the surface to allow civil unions for same-sex couples, many Americans have not been educated on the impacts explained above. As the support for civil unions for same-sex couples inched up, attitudes on same-sex marriage remain almost exactly the same as they did a year ago. The Pew Research survey showed that over half of Americans (53 percent) oppose marriage for lesbians and gays. This public opinion reflects the heart of the American people. We want all Americans to receive fair treatment and overcome discrimination, but we do not want to redefine society by their issues. More than three-fourths of white evangelical Protestants and two-thirds of black Protestants oppose same-sex marriage. These figures show the battle line and the strength and make-up of our army.

This week is an important one for the definition of traditional marriage. An interfaith gathering of Catholics, Baptists, Missionary Baptists, Southern Baptists, Presbyterians, Muslims, Mormons, Pentecostals, and Charismatics will oppose a Goliath. The People’s Rally - Let the People Vote! will make a powerful stand against the DC City Council’s proposed bill to allow same-sex marriage within the District. We want people from all over this country to gather this Sunday, October 25 from 2:00-5:00 pm at Freedom Plaza across from the Wilson Building. Stand for Marriage DC is seeking to place a voter initiative – the Marriage Initiative of 2009 on the November 2010 ballots to preserve the definition of marriage as between one man and one woman.

With the heart of David, we can win this fight. Gather your friends and family and join us this Sunday. Visit www.thepeoplesrally.com to learn more.