Harlan Hill
|
Posted: Jun 27, 2018 10:04 AM
Share   Tweet
The opinions expressed by columnists are their own and do not necessarily represent the views of Townhall.com. 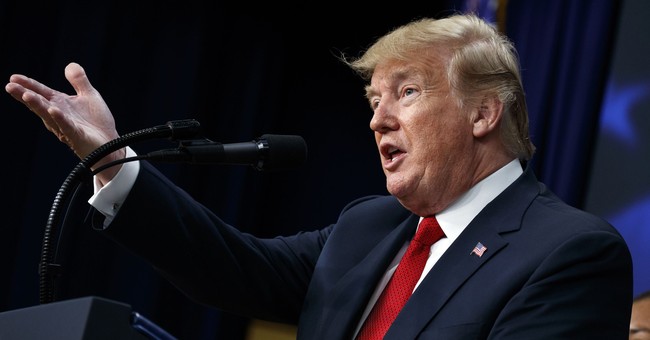 President Trump has already delivered historic results in line with the likes of Washington, Jefferson, and Roosevelt.

In his first 500 days, President Trump is on par to be one the most productive presidents in American history. The President’s achievements on foreign policy, the economy, and re-establishing American exceptionalism are more than some presidents have accomplished combined -- and we’re not even halfway done.

Looking back over the past decade or so, one could argue that the United States stumbled into the 21st Century. From 2000-2017, we were blindsided by Islamic terrorism, hit with the worst recession since 1929, and entrapped ourselves in the false hope of globalism.

We tried to solve these problems by trying to export democracy to the Middle East, bailing out and nationalizing our big banks, spending our way to oblivion, and forfeiting our sovereignty on the world stage.

Now, President Trump is changing the course of history and righting these wrongs of the past.

One of the first steps President Trump took to Make America Great Again was by destroying radical Islamic terrorism and restoring the confidence and allegiance of our allies.

The President did so by taking the restraints off our military commanders on the ground, and unapologetically targeting ISIS’s infrastructure and funding. He then reasserted an American presence in Syria, not by putting boots on the ground and endangering the lives of young American service members, but by using the supremacy of American technology.

Around the same time, President Trump announced that the U.S. Embassy in Israel would be moving to Jerusalem (a promise that prior administrations made but never kept). Within days of the embassy move, President Trump withdrew the U.S. from the failed Iran nuclear deal -- a decision fully supported by Israel.

President Trump is also the only candidate from either party over the past 30 years to actually get tough on China, while handling the existing issues in Asia from decades past.

His competitive, but friendly relationship with Chinese President Xi Jinping have kept things honest and safe between the two nations, with hopes that the President’s strategic engagement leads to a long-overdue economic victory. President Trump’s radical new approach on North Korea seems to be a gamechanger. The June 12 summit in Singapore was the first time a sitting U.S. president has had face-to-face talks with the leader of North Korea -- with initial progress begun on the  denuclearized Korean Peninsula.

When it comes to the economy, President Trump is literally on track to be the best jobs president God ever created, as he has said before.

Unemployment just hit a 50 year low at 3.8 percent, and our gross domestic product continues to remain resilient and healthy. You can attribute this to  the President’s historic tax cuts signed into law six months ago, combined with the deregulation of cumbersome and restrictive rules from past administrations.  The resulting economic boom is benefitting all Americans, including the black community, whose unemployment fell to an all-time record low at 5.9 percent in April.

But the most important thing a president can do, even according to President Trump himself, is to be a great cheerleader for our country.

Whether it be at international summits with world leaders or sold out campaign events in little places called Elkhart, Duluth, and Fargo, President Trump is sending one clear message to people all over the world --- America First!

President Trump doesn’t seek to be compared to our nation’s greatest presidents, but increasingly his record calls for it. Like America, President Trump’s record thus far is exceptional.

Harlan Hill is a political advisor, media commentator, and an advisory board member of the Donald J. Trump for President, Inc., President Donald Trump's 2020 re-election committee.