Hank Adler  |  Dec 27, 2017
The opinions expressed by columnists are their own and do not necessarily represent the views of Townhall.com.
Top Columns
Trending on Townhall Media 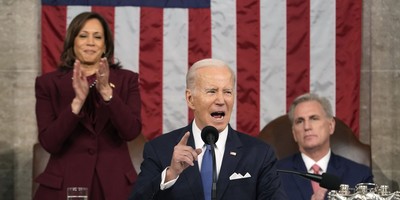 The Tax Bill passes and Nancy Pelosi announces : “I have said that this was stiff competition by some of the other things they have put forth, is the worst bill in the history of the United States Congress.” Quite a statement considering that a Democratic Congress passed the Fugitive Slave Act and the Kansas Nebraska Act. Some other pro-slavery bills that could not get through Congress make these two bills look like child's play. As usual, Ms. Pelosi could not care less about facts, she only cares about political power.

The Tax Bill passes and Nancy Pelosi announces "This GOP tax scam is simply theft – monumental, brazen theft – from the American middle-class, and from every person who aspires to reach it." Immediately, Democrats announce they will target Republican Members of the House of Representatives in wealthy districts because these wealthy individuals will see their taxes go up under the Tax Bill.

The Los Angeles Times put passage of the Tax Bill on page 6.

The New York Times speculated that President Trump could save $11 million annually on his income tax payments based upon a review of his 2005 tax returns. Yes, 2005. While 2005 is unfortunately the only year available and the information that is available hardly reaches the level of sketchy, speculation of an $11 million benefit was reported, re-reported and re-reported. One thing for sure, 2005 was a very long time ago and President Trump's 2018 tax return would be exceptionally unusual if much more than the social security number remains the same.

Let's put a few sections of the law into play with respect to Mr. Trump's income and income taxes. One, it appears that a very, very substantial portion of President Trump's income is from reputational branding and consulting. To the extent that he has income from these activities, this income is disqualified from the twenty percent deduction for qualified business income and the new tax law will provide no benefit except to the extent of the overall reduction in rates. Two, to the extent that Mr. Trump has real estate income from apartments that are more than twenty-seven and one half years old ,which is likely a significant portion of his real estate empire, his benefit from the qualified business deduction is limited to 20% of W-2 wages paid for apartment management, not a very significant amount. Finally, he loses his state and local income tax deduction, around 12.5% of taxable income for a wealthy New York City resident.

The precise impact of the new tax law on Donald Trump is  unknown, but it is quite possible that, in fact, his federal income taxes will increase.

With respect to the change in the tax law that President Trump will have a reduction in his estate taxes of $4 million when he dies, those favoring estate taxes as an appropriate method of taxation should be in complete bliss. Yes, a couple of thousand estates will save as much as $4 million, but the bogus argument about families being forced to sell the farm or family business to pay estate taxes is completely washed away with this change. If President Trump is truly worth $4 billion, the increase in the exemption for estate taxes will only reduce his estate taxes from $1.6 billion to $1.596 billion. And now there is no justifiable reason to eliminate the estate tax.

There are always parts of any tax bill where there should be a "do over". This tax bill is no exception. But overall, the communications from the Democrats and the media have been nothing less than inflammatory and absurd. And the allegations that President Trump will save millions annually are unsupported.