Dancing with the One That Brung You - Tax Reform

Hank Adler
|
Posted: Nov 13, 2017 12:01 AM
Share   Tweet
The opinions expressed by columnists are their own and do not necessarily represent the views of Townhall.com. 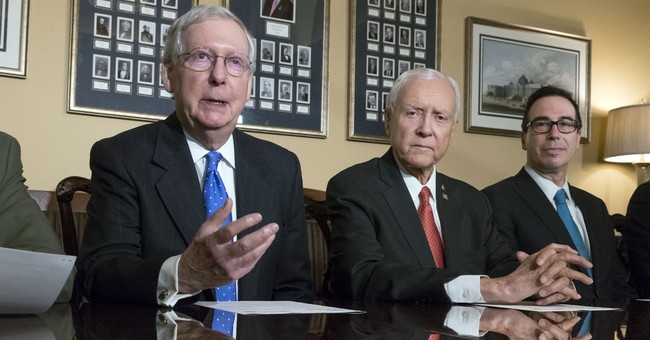 Consider two food service workers who have been working at a local university for the past three decades. Neither has a high school diploma; each was born and raised a few miles from campus. They have three children currently enrolled in the university's science and mathematics programs. One is hoping to be a doctor, another a physicist and child number three a high school mathematics teacher. Literally, the American dream.

One of the reasons they have remained employees at the university for twenty years is that universities have been able to provide qualified tax-free tuition reductions for their employees. This law has been in the Internal Revenue Code for many, many decades and has historic precedent that in some ways goes back centuries. The couple's gross income is $70,000. Under the House's tax reform package, their taxable income for 2018 will now include the previously free tuition of $120,000. No longer will the tuition be tax free. There is no grandfathering, no transition, nothing to protect the three college students or their parents. And certainly, as the bill is proposed to be effective January 1, 2018, there is no time for their children to search out new scholarships. Obviously, the parents will not be able to pay the income tax that would result from the proposed tax reform. Essentially, their children will need to drop out of college and pursue scholarships beginning in September, 2018. This cannot be what the House of Representatives has in mind.

For decades, the federal government has encouraged students to attend universities and borrow funds for their education. The House bill eliminates the deduction of student loan interest beginning in 2018. If a federal prosecutor were pursuing a public corporation for changing a similar policy, that prosecutor would be looking for significant punitive damages.

It goes on. Graduate students in the House proposal will lose tax credits and employees studying for advanced degrees will be required to report as taxable income the tuition being paid by their employers.

Should any or all of these tax opportunities be eliminated from the Internal Revenue Code? Let's be clear here: a cogent argument could and can be made to eliminate these "tax loopholes". A cogent argument can also be made that each of these tax provisions encourages higher education and that we should use the Internal Revenue Code to incentivize behavior. These two positions are irrelevant to this discussion. The issue is whether taxpayers who are and have been relying on these tax rules should have their worlds turned upside down through the sudden and immediate elimination of laws that allowed them to begin their college education or continue their advanced degrees. Another issue and it holds huge political ramifications is whether the literally tens of millions of Americans who are paying their college loan debt payments should lose their interest deduction overnight.

The traditional southern saying: "Dance with the one that brung you" has a long history in the Internal Revenue Code. For the most part, there have always been transition and grandfathering where taxpayers have relied on existing tax law. Honest people can debate these educational rules with resulting different conclusions. What is difficult to understand is why the House of Representatives did not propose grandfathering and transition rules.

On a smaller stage, although one only likely very important to significant political contributors, is the change in the deductibility of the "premium" (bribe) paid by wealthy purchasers of collegiate sports tickets to their universities to insure they receive the best tickets. This "premium" has been eighty percent deductible for many decades. It is intellectually indefensible, but many universities have been relying on these amounts to fund their athletic programs and the universities have long term contracts with third parties that are, in part, reliant upon a continuation of these rules. The University of Southern California is relying on these funds to rebuild the Los Angeles Coliseum for both their football program and the Olympics in 2028.

There is much to love in the proposed tax bills. But, and it is a huge but, in the Joint Committees between the House and the Senate, there needs to be an understanding that there are situations that require grandfathering and transitions. Taxpayers should be allowed to rely on a tax code that cannot change literally overnight and undo planning that has been encouraged for decades. There are easy and appropriate fixes.