Hal Scherz
|
Posted: Jul 30, 2018 9:00 AM
Share   Tweet
The opinions expressed by columnists are their own and do not necessarily represent the views of Townhall.com. 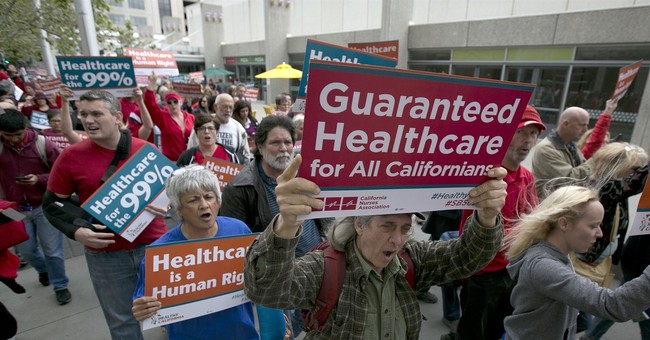 There are several irrefutable facts that must be stated together to understand what is happening with healthcare in the US. The first is that the Democratic Party has been split because of the ascension of the Democratic Socialists. Their ideation has significantly influenced the direction of the party as a whole, moving it further left than ever before. The second is that the Democratic Socialists do not like Obamacare any more than those on the right because it is standing in the way of one of their central issues- the creation of a single payer system. The third is that this radical idea is taking hold as part of the Democratic platform and is generating popular support as Obamacare fails and the GOP does nothing to solve this mess.

What was once considered a radical idea and impossible to imagine in any serious discussion about American healthcare, single payer has become very mainstream as a Democrat talking point regarding healthcare. If one doubts this, consider the fact that the Bernie Sanders bill- Medicare for All Act- S1804, has 16 current sponsors, including highly visible names like Cory Booker, Kirsten Gillibrand, Kamala Harris and Elizabeth Warren. Many of these individuals have been mentioned as presidential candidates for 2020.

Not to be outdone, the House has their own single payer bill; a revamped version first introduced by former Rep. John Conyers. The Expanded & Improved Medicare for All Act- HR676, already has 123 co-sponsors. This bill, very much like the Senate version, proposes to nationalize healthcare, and the Democrats are trying to outdo each other seeing who can appear most socialist regarding healthcare. This appears to be the direction that the Democratic National Committee is going, as their deputy chair, Keith Ellison, has assumed the lead sponsor role of this bill. However, the Democratic Congressional Campaign Committee commissioned a survey which reveals that only 12% of Americans want single payer healthcare. Candidates have been warned to be careful how they message this without damaging their electability. They have been given talking points to help them hide their true intentions.

Single payer healthcare has always been a central feature of every socialist regime around the world. It sounds so wonderful and irresistible that only the most horrible of individuals would reject these Democratic Socialist proposals. Who would not like to see comprehensive medical coverage for everyone in the US? This plan would be free to all, including non-citizens, and provide free care without copays, deductibles or premiums. It would also include a jobs initiative and severance for those affected by transitioning to a government run healthcare system. And best of all, it would be paid for through increased taxes, predominantly on the “rich.”

This idea is ludicrous in so many ways but today when crazy has become mainstream, people need to understand how misguided it is and reject it. There are many reasons to do so but it may be best to focus on cost.

We cannot afford a single payer healthcare system. Sanders claims that his system would cost $1.4T and could be paid for by increasing federal taxes 2.2% and levying a 6.2% surcharge on employers. This is nonsense and fantasy. A single payer system controls costs by rationing care and paying doctors less to provide it. Price controls like copays on employer based health plans and Medicare Part B would disappear and demand for care would soar. Emory healthcare economist Ken Thorpe estimates that this system would cost taxpayers $2.5T every year in new taxes and the Urban Institute estimates that the Sanders proposal would cost $32T by 2026, which means $24K in higher taxes for every household in America.

Several states have considered a single payer option but have rejected it because it was unaffordable. Bernie Sanders’ home state of Vermont abandoned single payer because it would have required an additional $2.6B in taxes annually to pay for it, or a 160% increase in state taxes. In 2016, 80% of Coloradans rejected the single payer ballot initiative when it was revealed that in order to pay for it, taxes on just about everything would need to be raised by 10%, and even then, by year 10 there would be a $7.8B deficit or 14% of revenue. California is the latest state to flirt with single payer. Senate Bill 562, the Healthy California Act takes away health coverage that Californians currently have including Medicare, Medi-Cal and commercial insurance replacing it with a single state government run plan. This plan would cost $400B annually with the state needing to come up with about half. S562 would effectively double the state budget and be paid for by a higher sales tax, increased taxes on businesses and a 15% payroll tax on earned income.

In other “Blue” states, Democrats are using single payer as a litmus test to see who could outdo each other. Former actress Cynthia Nixon is making a foray into politics, and using healthcare as a flashpoint in her gubernatorial challenge against NY Governor Andrew Cuomo. Ben Jealous, the former NAACP chair and Democratic nominee for governor of Maryland, has enthusiastically embraced single payer as well.

“Socialism works until the money runs out” as Margaret Thatcher has said, and most countries around the world that have embraced socialized healthcare are looking for ways out, so why would we look to this as the solution for our healthcare system?