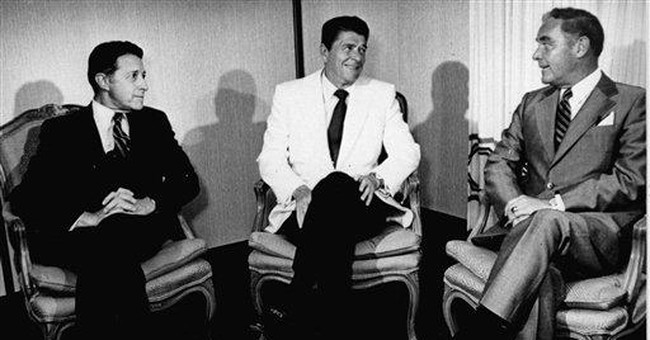 On March 30, 1981 at precisely 2:27 pm, six gunshots rang out just outside the VIP entrance to the Washington Hilton. Moments later, as three felled men lay bleeding on the ground outside the hotel, an armored limousine carrying the President of the United States raced away from the scene. Though it wasn’t immediately apparent, the president had been shot. Ronald Wilson Reagan was just weeks into his first term in office when he was struck in the side by a deflected bullet fired by a mentally deranged would-be assassin. Most Americans are aware, of course, that Reagan survived this attempt on his life and went on to become one of the most effective, conservative, and beloved presidents in US history. What many Americans do not know is how close he came to dying that day, and how a series of split-second decisions by secret service agents and medical professionals saved Ronald Reagan’s life.

Rawhide Down: The Near Assassination of Ronald Reagan is the recently released, definitive account of what happened on that harrowing Monday afternoon three decades ago. Author Del Quentin Wilber, a Washington Post reporter, uses information gleaned from trial transcripts, declassified reports, a remarkable audio recording from inside the White House situation room, and more than 125 interviews to paint a vivid and meticulously-researched picture of the chaotic scenes at George Washington University Hospital and the White House. The story that emerges is an extraordinary testament not only to the professionalism and heroism of those who cared for our 40th president, but to the sunny nature, bravery, and indefatigable spirit of the man himself. I spoke with Wilber on my radio show last weekend. A partial transcript of our fascinating discussion appears below:

GB: Of course, we now know what happened that day – thank God – Ronald Reagan survived. In fact, [Press Secretary] Jim Brady survived…and within weeks [Reagan] goes back to Congress to this, as you put it, ‘rafter-shaking’ ovation that he receives when he addresses the country…

GB: And he goes on to have, many conservatives would argue, one of the greatest presidencies in US history.

DQW: I don’t think it’s just conservatives. I think that if you put away your ideology and you just look at the success of a person – whether he got his agenda through, and whether his goals were met – it was a successful presidency.

GB: Yeah. No doubt. But at the time, the country, as you said, was starting to have doubts. It’s very early on…

GB: [People were asking themselves] ‘Did we make the right decision? Was this maybe a rash decision?’ Then this becomes a day that once it started leaking out how Reagan comported himself [throughout the ordeal], he endeared himself indelibly to the American public. Talk about some of the things that he did and said that are just sensational.

DQW: This is the day that allowed Reagan to separate the person from the politics. You wouldn’t believe the readings I go to, the people that come up who are Democrats and say, ‘I hated Reagan’s policies, but I liked him as a person.’ Do you know how many politicians would die for that? And on this day, you saw a lot of sympathy for Reagan because he’d been shot, but it’s more than that. We got an inner look at his character because you know when you can’t fake it? When you’re facing death. You cannot fake who you are. You just can’t do it; it’s impossible. So here he is, chest tube in his side, they’re draining the blood, the blood won’t stop, oxygen mask on, people scrambling around he doesn’t know, and Nancy Reagan walks in. He says, ‘honey, I forgot to duck.’ That instinct, we know, is to calm her down. You’ve been shot, man, and you’re putting your wife’s feelings above your own? Amazing.

DQW: He gets wheeled into surgery and he runs into his three top advisors – and he says, “Who’s minding the store?” Another joke to calm them down. He gets into surgery; they’re about to operate…

GB: This is famous.

DQW: Yep, this is the best line of the day. They’re about to operate, he gets on an elbow, takes off his oxygen mask, dramatically looks around the room, and says, ‘I hope you’re all Republicans!’ The room erupts in laughter. This is important. This [information] gets out…and the American people love it…it reassured the country…David Broder – I interviewed him – the late political columnist…

DQW: Right, I interviewed him. He had written a great column the day after this incident, saying ‘this will reshape Reagan’s presidency because, I promise you, no one will forget what he did on this day. They will remember.’ And I asked him [for this book], ‘Is that true? Now that you look back thirty years later, is that true?’

‘[He said] Del, this was the day that made him a mythic figure.’

Rawhide Down is an excellent piece of historical journalism. It avoids potential partisan pratfalls by generally ignoring politics and adhering to the facts – what a concept! Rather than pushing an agenda, Wilber elegantly allows the inherently dramatic story to unfold on its own. The resulting product speaks for itself. Its detailed and engrossing presentation will capture the imagination, and likely the admiration, of Reagan’s political allies and foes alike.

The book is available for purchase HERE, and our interview will re-air in its entirety this weekend on my radio program.