Mr. Todd – Noah’s Ark Is Not a Fairy Tale

Gregory Rummo
|
Posted: Jan 01, 2020 12:01 AM
Share   Tweet
The opinions expressed by columnists are their own and do not necessarily represent the views of Townhall.com. 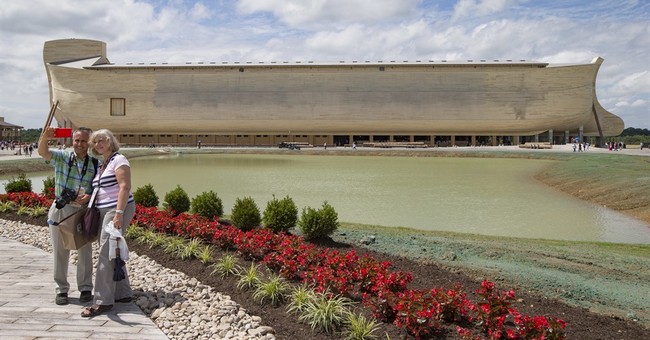 Chuck Todd’s Sunday commentary on “Meet the Press” equating Trump supporters to Bible believers willing to embrace “fairy tales” is outrageous, displays an ignorance of the manuscript evidence for the authenticity of the Bible (“more than 25,000 partial and complete manuscript copies of the New Testament”), shows a dearth of understanding for the geological and historical evidence for a worldwide flood, and a lack of respect for and sensitivity to the millions of people – both Jews and Christians – who believe the biblical narrative is a true account of this catastrophe of immense proportions that went on to reshape the Earth’s geology.

Todd’s characterization of the biblical narrative of the worldwide flood as a “fairy tale” was dragged up from an almost year-old letter-to-the-editor written to the Lexington Herald.

The letter stated: “…People support Trump … because people have been trained from childhood to believe in fairy tales... This set their minds up to accept things that make them feel good... The more fairy tales and lies he tells the better they feel... Show me a person who believes in Noah's ark and I will show you a Trump voter."

There is abundant evidence right here in our own country for Noah’s flood such as the Grand Canyon and Monument Valley. These geological wonders show evidence of horizontal sedimentary deposition, the result of catastrophic, hydrological forces. Flood waters, carrying millions of tons of sediment, drained off the continent into the oceans hundreds of miles distant carving the canyons and leaving behind the immense buttes and mesas in their wake.

Native Americans have revered these sites for centuries. The larger buttes and mesas in Monument Valley have names like Totem Pole, Three Sisters, Yei-Bi Chei, and Merrick Butte. Each has spiritual significance in the Navajo culture. The Mittens—two buttes standing 978 and 1,023 feet, respectively—were supposedly left behind by the Holy People, deities or spiritual beings who lived on Mother Earth in the beginning of time. Many Native American tribes trace their origin to the Grand Canyon.

The Havasupai believed it to be the birthplace of the human race. The Hopi believed it was where all living things came through another dimension into our world.

But perhaps the Hualapai have the most interesting tradition about the origin of the Grand Canyon. They believe the earth was once covered by a flood. “The Great Hero” then stuck the Earth with a huge knife, rocking it back and forth, creating deep gorges so that the water could drain away.

How did such beliefs persist among Native Americans for so many centuries? The Hualapai aren’t the only people with such a story. Genesis 7:19 states: “…The waters prevailed exceedingly on the earth, and all the high hills under the whole heaven were covered.” The Bible goes on to recount how God—The Great Hero of the Judeo-Christian tradition—caused the flood waters to recede from the Earth.

Noah's flood is mentioned throughout the Old and New Testaments. Psalm 104 and Job 22 refer to the great deluge as does Jesus in the Gospels. The apostle Peter also mentions Noah's flood in both of his epistles. But the event first appears in Genesis chapters 6 through 9, where it is described in detail.

“The Lord saw how great man's wickedness on the earth had become, and that every inclination of the thoughts of his heart was only evil all the time. The Lord was grieved that he had made man on the earth, and his heart was filled with pain. So, the Lord said, I will wipe mankind, whom I have created, from the face of the earth -- men and animals, and creatures that move along the ground, and birds of the air -- for I am grieved that I have made them. But Noah found favor in the eyes of the Lord” (Genesis 6:5-8).

God told Noah exactly how to build the ark and gave him 120 years to complete the task. Along with his sons and quite possibly, plenty of hired help (although the Bible doesn't specifically mention this), Noah built a huge cargo ship out of gopherwood and pitch.

When the rains came, Noah, his wife, their three sons, and their wives went into the ark. Along with them, they brought two of almost every kind of animal and bird. (Noah was instructed to take seven pairs of every animal and bird considered clean for sacrificial purposes.)

Imagine the stories that spread through the region about that "crazy old man building the big boat." People possibly traveled for miles to see this sight -- because it had never rained. The Bible describes the conditions on the antediluvian Earth as vastly different from our present-day weather patterns (Genesis 2:6).

During the many years that the ark was under construction, anyone could have been spared by believing in Noah's preaching. The Bible says that he warned his neighbors of God's impending judgment. "God did not spare the ancient world when he brought the flood on its ungodly people, but protected Noah, a preacher of righteousness, and seven others" (2 Peter 2:5).

When the ark was completed, it stood laden with cargo on dry ground for seven days. God left the door open -- anyone could have walked in and been saved. But aside from Noah's family, no one else entered. At the end of the week, the Lord shut the door and the disaster began. The rain started and the underground springs burst open.

The vast extent to which the Earth's surface is covered with water is only one of many evidences for a massive, worldwide flood. Other evidence abounds.

In the fall of 2000, an issue of U.S. News and World Report reported "an amazing archaeological discovery beneath the surface of the Black Sea." Robert Ballard (who found the Titanic) led an archaeological team that discovered "a large wooden building 12 miles offshore at a depth of more than 300 feet." Ballard said, "Apparently there is an ancient coastline some 550 feet below the present sea level.

"It was a find beyond our wildest imaginations," he said.

Scientists have claimed there is photographic evidence that may be the remains of Noah's Ark. Military and private satellite snapshots of Mount Ararat in eastern Turkey reveal an anomaly that researchers say might be the remains of Noah's Ark. The first pictures of what has come to be known as the Ararat Anomaly date back to 1949. U.S. intelligence officials analyzed aircraft imagery of Mount Ararat taken in June of that year. The photos show a unique feature at 15,500 feet on the northwestern plateau.

Porcher Taylor, an assistant professor at the University of Richmond in Virginia and an expert in satellite imaging, has gathered evidence on the Ararat Anomaly since 1993. He estimates the anomaly to be approximately 600 feet long.

Another expert, a naval engineer and architect, has examined the photographs and believes that the structure shows "prongs" or "ribs" similar to what one would expect to find on the keel of an ancient marine vessel. The most recent satellite evidence comes from Space Imaging's Ikonos 2, which can resolve images as small as one meter across. From October 1999 through the summer of 2000, the mountain was photographed. It was reported that a “seven-person team of independent scientists and analysts scrutinized the batch of images. While the photos clearly show some type of feature, the team was divided in their interpretation. While some felt the anomaly could be human-made, others voted for rock or deferred to inconclusive data.”

This evidence is not just interesting on its face but demonstrates the number of scientists, historians, theologians and open-minded journalists willing to follow the evidence wherever it leads.

To those of us who embrace the Bible’s narratives as being true accounts of historical events, none of the evidence comes as a surprise. “We have not followed cunningly devised fables,” (2 Peter 1:16) but we have the accounts of “eyewitness.”

These eyewitnesses – the writers of both the Old and New Testaments – have created the expectation that the evidence demonstrated by the Earth’s geology, Native American traditions and archaeological discoveries would support the Bible's accounts of events.

As it turns out, Trump voters are in good company with a lot of other, really smart people.