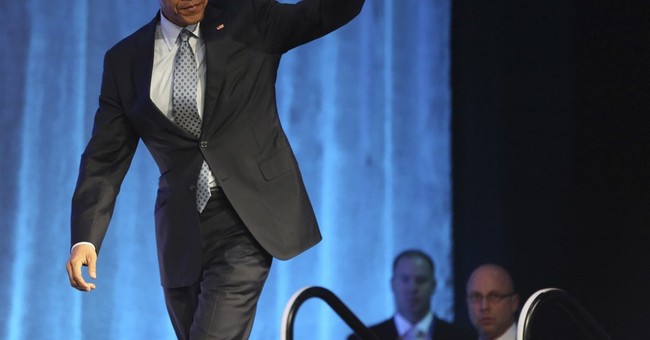 The Obama administration is up to its old tricks again just in time for Halloween -- and its threatening to turn off the lights on the American people. On Friday of last week, the Obama administration finally published the so-called “Clean Power Plan,” otherwise known as Obama’s takeover of the electricity sector, in the Federal Register. The regulation seeks to reduce carbon emissions from power plants by forcing states to embrace the President’s radical energy agenda. The publication comes a full two and a half months after the EPA released the text of the regulation on its website. By using this delay tactic, the Obama administration avoids a potential injunction on the regulation before the United Nations Conference on Climate Change begins next month. And this delay is just one of the many tricks that Obama and the EPA have pulled on the American people as part of their electricity takeover.

One trick involved moving the goals posts for states by increasing their emission mandates. The regulation mandates that each state reduce its carbon emissions by a given amount by 2030. Each State must submit a plan to the EPA outlining how it will achieve the reductions. The EPA initially set low emission mandates for 16 states when it proposed the regulation back in June of 2014. But when the EPA finalized the regulation this year, the mandates dramatically increased for these 16 states. Montana initially had to reduce its carbon emissions by 21 percent. But in the final version, the mandate shot up to 47 percent. The bait and switch tactic by the Obama administration prompted Democratic Governor Steve Bullock to rethink his opinion of the regulation, saying he is “extremely disappointed by this.” North Dakota saw its emission mandate more than quadruple from 11 to 44 percent and Democratic Senator Heidi Heitkamp called it “a slap in the face.”

By now Americans should be all too familiar with the tricks employed by the Obama administration to achieve its ends. The EPA did not even considered using the Clean Air Act to regulate carbon emissions until after the 2009 “Cap and Tax” bill was rejected by the American people and died in the Senate –a Senate that Democrats controlled at the time.

After this crushing defeat for Obama’s radical energy agenda, the EPA mysteriously and suddenly found new authority to issue a regulation on carbon emissions from a little-known section of the 1970 Clean Air Act (an authority that multiple generations of bureaucrats apparently overlooked for over 40 years). The EPA’s newly found legal authority is such a farce that even noted liberal scholar and Harvard Law professor Laurence Tribe has come out against it, saying the EPA acts “as though it has the legislative authority anyway to re-engineer the nation’s electric generating system and power grid. It does not.”

The Obama administration resorted to these tricks because of the damage this regulation will inflict on the American people. Obama’s takeover threatens Americans’ access to affordable and reliable energy. Initial studies of the regulation estimate that it could raise the average family’s utility bills by $680 per year. With Americans already struggling in a weak economy, many simply cannot afford another expensive Washington mandate.

Fortunately, there is a way to fight back against the Obama’s power grab. Under the Congressional Review Act, Congress can pass a resolution of disapproval invalidating the regulation and force President Obama to make the choice to raise Americans’ energy bills. State Attorneys General can also file suit against the Obama administration and 24 have already done so. Governors can direct state agencies to not submit a plan to the EPA. With these actions, the Obama administration will not be able to trick Americans into paying higher utility bills.