From the Dragon’s Mouth – Chinese Messaging on Space

Grant Anderson
|
Posted: Oct 04, 2021 2:58 PM
Share   Tweet
The opinions expressed by columnists are their own and do not necessarily represent the views of Townhall.com. 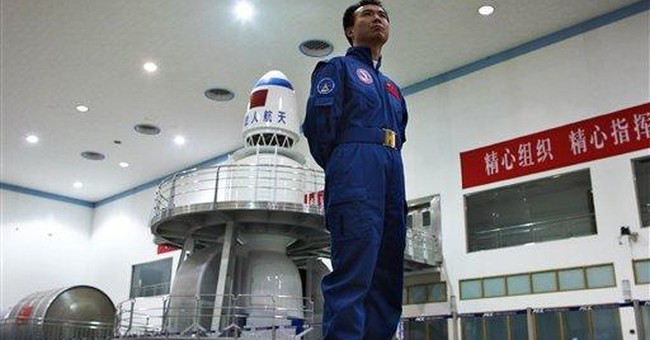 The use of propaganda and other forms of strategic influence have long been an important component to a nation’s wider geopolitical, security, economic and military objectives. Innumerable examples of strategic messaging for geopolitical purposes – from World War II, to the Cold War, to the present day – abound. Notably here, the space race of the mid-20th century between the U.S. and the Soviet Union was a messaging battle as much as it was a technological or scientific contest.

The message of the space race – sometimes explicitly stated, but always understood by the powers at the time – was that winning the race to the Moon would help validate the victor’s political and economic system. In fact, that validation – part of the proof that would demonstrate the legitimacy of freedom and capitalism or communism and central planning to the world – lay at the heart of why the Cold War was fought.

Today, the U.S. and China are essentially engaged in a new space race. Much like the Cold War, this space race is an extension of the larger strategic competition between the two leading global powers. And once again, this overarching competition involves influencing other states and regions – to shore up alliances, build market access, establish security commitments, and to generally promote the superiority and attractiveness of one nation and its system over the other. Technological achievement in space and the accomplishments of national space programs are an increasingly important part of this influence effort – and it is for all of these reasons why China’s strategic political messaging on space is worth a look.

China – through various propaganda outlets like China Daily and Xinhua Net – consistently publicizes its achievements in space exploration, pushes back on western accomplishments, and suggests their advancements in technology-manufacturing will ultimately pave the path for China to realize its pre-self-determined global supremacy. They hint their ‘Long-March’ into outer space – an express triumph for communism – is rooted in history, and is China’s destiny. A few specific examples help detail the tone of their messaging.

In a China Daily piece from June of 2021 entitled “West needs to bury Cold War mindset about space exploration,” the point is made that the “space mission signifies China’s hard work and self-reliance in space technology. The painstaking journey on the way to achieving this success is similar to China’s journey of realizing its first “Centenary Goal” of building moderately prosperous society in all respects. But our focus should not be confined to the three astronauts, we should also laud the hard work and dedication of the many backup astronauts and the large group of scientists and engineers who made this mission a success.”

Another China Daily piece recently explains that “China is committed to peaceful space exploration… it is groundless, therefore, to accuse China of triggering an arms race in space, especially when it is pursuing a peaceful space program to be in the position the US was decades ago.”

In another example seeking to paint the US space effort in a negative light, CGTN wrote that “Biden is but the latest in a long line of American leaders who believe in their nation's so-called exceptionalism, which implies that it's at the very least 'the first among equals' in the international community. This suggests that the U.S. is at the top of the global hierarchy, thus making the country itself an oligarchy in this system, not to mention its companies' literal oligarchic practices of trying to aggressively snuff out their Chinese competition, especially in the tech sphere. Chinese companies and the state itself believe in fair rules-based competition, unlike their American counterparts, who only crave power.”

China has also pumped out messaging related to the advancements of America’s private sector accomplishments in space. Xinhua Net recently highlighted how “there ha[ve] also been critics in the United States saying that these flights to space are just 'joy rides' for the wealthy, complaining they should be spending time, money and energy trying to solve problems on Earth” – perhaps attempting to create further divides between average citizens and the ultra-wealthy.

In all of this, it is important to understand what the messaging means and its ultimate purpose. And in understanding the motivation, efforts to counter that messaging can be more effectively designed and executed. China is not simply messaging to the U.S. when it conducts an information campaign; much of China’s messaging is directed toward other nations as part of a multifaceted, enduring effort to build influence and to suggest that potential partner states have more to gain by siding with China over the west. As the world recovers from the Covid-19 pandemic, it can only be expected that China will continue to use a wide spectrum of messages, influence campaigns, and propaganda in order to shore up its reputation with the global community.

The importance of strategic messaging continues to grow as increasing levels and aspects of policy and public opinion are influenced and shaped by the flow and packaging of that information. In a media and information-dominated environment, the role of strategic communications for any organization – for both offensive and defensive purposes – is not just vital to success, but necessary. America’s dominance in space in the later part of the Cold War and into the early 20th century is being challenged, and with so many interests, priorities and concerns riding on success in space – commercial growth, science, communications, and shared security – the stakes are high. As the use of information campaigns by China and other actors against the U.S. and our interests continues, space will remain a key topic of messaging – both in showcasing one nation’s achievements and successes, and in questioning the ambitions, accomplishments, and capabilities of others.

Without question, success in space carries significant national prestige, and all of the feats associated with success in space – pushing scientific boundaries and accomplishing the impossible – are what leading global powers do. Like any aspiring global power, China understands the symbolism and the narrative geopolitical strength of achievement in space – and they work constantly to show the world what their space program is doing. At the same time, as long as the U.S. has a strategic interest in maintaining strong relationships with countries and governments also targeted by China, more concerted efforts to highlight our accomplishments in space – via multiple methods, platforms and global forums – may become increasingly important moving ahead.