Gil Morales and Chris Kacher  |  Dec 20, 2011
The opinions expressed by columnists are their own and do not necessarily represent the views of Townhall.com.
Top Columns
Trending on Townhall Media

We think things will get worse before they get better. The breakdown in gold is likely signaling another liquidity crunch like we had in late 2008, and we think it could bode ill for the markets in the near- to intermediate-term. In the chart below, note that gold broke down below its 200-dma in August of 2008 and stocks followed soon thereafter, in September.

We see potential for another type of sell-off or at least continued choppy consolidation for the first part of the year. As we approach summer the market should begin to discount the coming 2012 election, which we believe could provide a rationale for a bottom to all of this correcting and consolidating and a new bull phase to begin. This will depend on whether the market begins to see that there will be sufficient change in government in the 2012 election to drive policy changes that, in concert with QE, which we believe the Fed will at some point have no choice but to engage in again, could create a decent rally for stocks. It could at the very least provide an inflection point for economic policies that create more positive conditions for growth and hence stocks. 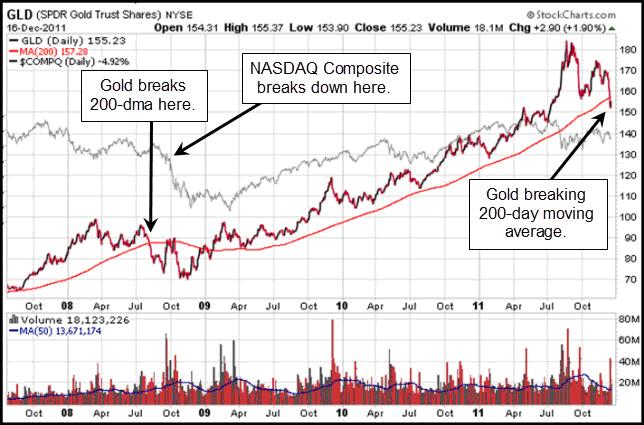 Unless the European Central Bank and the Fed come in sooner with a major new source of QE, our forecast for the start of the year holds. We also believe that gold and other commodities will fall as well. BRIC countries like China, Indica, Australia, Brazil, etc. have been tightening for a year and their growth has slowed, and they are now easing. We believe that the ECB and Fed will try and maintain liquidity as best as they can, but at some point will be forced to take more aggressive action and save the day.

In a new bull market we would look at the social networking space to provide a fertile field of potential new leadership, and we would pay close attention to the coming Facebook IPO in 2012. We see the field as similar to the initial internet leaders as they first came to market in 1996-1998, and there will be many cycles of creation and destruction as the marketplace weeds out the successes and the failures in this space. Out of these will come many new opportunities, and we like this sort of “new merchandise,” hence we see the social-networking space, and potential Facebook, as a leading area for the markets in any new bull phase that we think will develop in 2012 at some point.

On the short-sale side, former leading stocks often fall the farthest thus offer the greatest potential gains on the short side. The challenge is to detect which stocks have formed proper topping patterns and thus are in for a big fall. That is one of our specializations at Virtue of Selfish Investing. Leaders that are potentially topping or have topped include BIDU, PCLN, AAPL, AMZN, GMCR, and NFLX.

Dr. Chris Kacher and Gil Morales are founders of www.selfishinvesting.com, are Managing Directors of MoKa Investors, LLC and Virtue of Selfishing Investing, LLC, and co-authors of the book, “Trade Like An O’Neil Disciple: How We Made 18,000% in the Stock Market” (Wiley, 2010).

As Canada Prepares to Confiscate Guns, Some Provinces Rebel Against the Policy Matt Vespa
Trending on Townhall Video