Looking for Shorts in Choppy Market

After the market plunge in early August this past year, a period of heightened volatility and risk has reared its ugly head with no end in sight.  This heightened volatility has reached levels not seen since the flash crash of May 2010, with the end result being a whipsaw market that is very much a “chop zone.”

At times we have considered that this current environment is more a “market of stocks,” i.e., a stock picker’s market, rather than a “stock market.” And in such a market, there are opportunities for those who know where to find them. There is no question that certain leading stocks have split wide-open since the market’s break off the late July peak, and we at selfishinvesting.com have identified some material profit opportunities in individual stocks that had close-to-perfect technical set ups on the short side, and were well profitable, even in this highly variable environment. One of our favorite formations is the “head & shoulders” formation, a pattern that investors should be aware of during environments where former leading stocks have begun to falter. Historically, leading stocks have often formed such a pattern before rolling over for good and plumbing to new lows.

For example, Green Mountain Coffee Roasters (GMCR), shown in Chart 1, was one such set-up as it formed a clear head and shoulders formation, as we’ve outlined in the chart. The stock is shown in Chart 1 at the time that the initial short signal was given as the stock was rolling over in the right shoulder of the formation with selling volume picking up sharply, as can be seen in the chart. GMCR paused briefly at the October 4th low before ultimately plunging below the $40 price level. The stock has since bounced and as of the time of this writing was trading at around the $50 level, still well below where the original sell signal in this head and shoulders formation occurred. 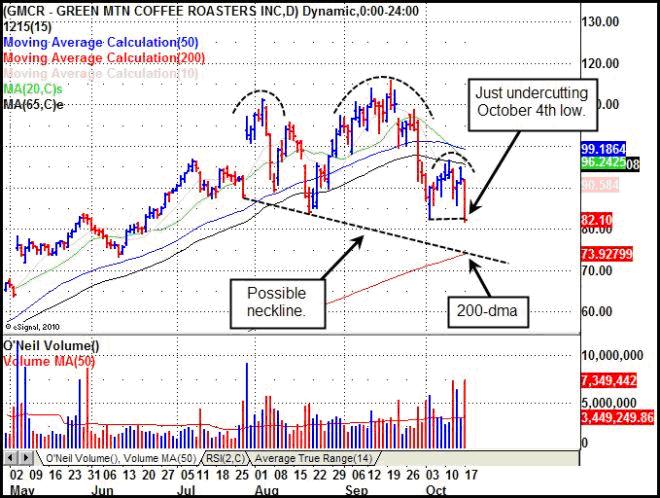 Netflix, Inc. (NFLX) was another stock we were able to pick off as it gapped-down through the neckline of a head and shoulders topping formation, shown in Chart 2. In this case the huge selling volume seen at the time of the downside “breakout” through the neckline was a short-selling signal. 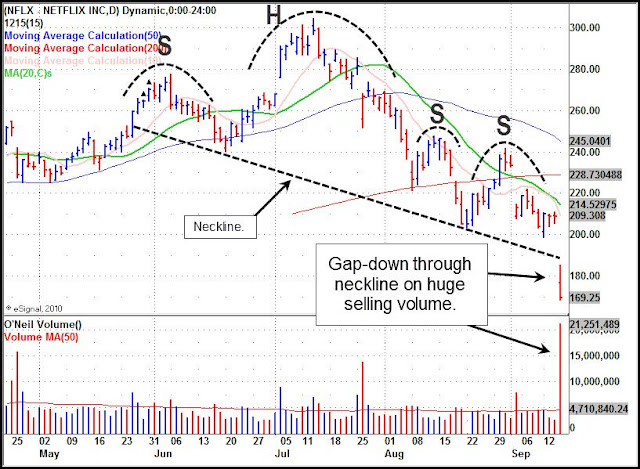 Another stock we began to pick up on our short-selling screens as early as November 2nd was Amazon.com (AMZN), shown in Chart 3. AMZN initially formed a double-top that in hindsight now forms the peak of the left shoulder and the head within its own head and shoulders formation. AMZN recently gapped-down below its 200-day moving average and down towards the neckline of a clear head and shoulders formation. Based on the double-top and the ensuing massive-volume gap-down after AMZN disappointed on earnings, we were able to identify this one as it was forming the peak of the right shoulder, and the stock has since broken down to complete the right shoulder in the formation. With AMZN currently trying to bounce off of its neckline the potential for a move up to the 200-day moving average at around 200 is what we might look at shorting into as a “pullback” up into the lows of the right shoulder in the head and shoulders formation. We’ve seen what happened to Netflix, Inc. (NFLX) and Green Mountain Coffee Roasters, Inc. (GMCR) after they formed similar formations, so it will be interesting to see whether AMZN follows in their foot-steps given its current head and shoulders topping formation. 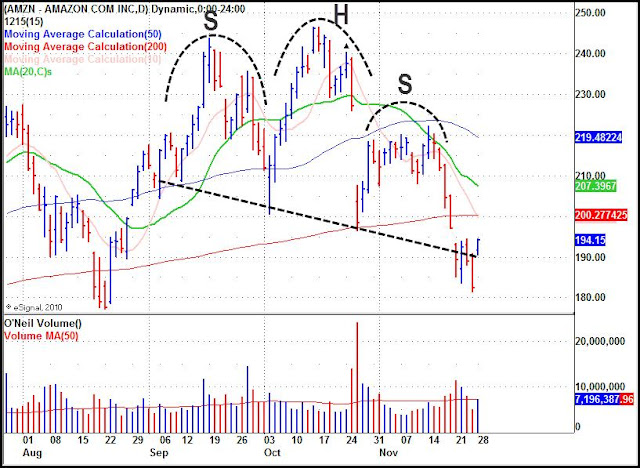 As you can see from the above examples, despite a relatively trendless environment, certain stocks were ripe for the taking on the short side in this market of stocks. The key is in understanding which technical formations to look for. In particular, watch for former leading stocks which may be wobbling after already having long price moves. Many of these leaders such as NFLX, GMCR, and AMZN, for example, have had impressive price runs since the market lows of 2009, and just like humans, stocks can begin to developing aging problems. One way to identify such stocks is through their technical patterns, and the head and shoulders top formation is one such weapon we like to keep in our quiver. Investors interested in learning more about shorting and the patterns that we look for should consult  “Trade Like an O’Neil Disciple” by the two authors of this article, or “How to Make Money Selling Stocks Short” by William J. O’Neil and Gil Morales (John Wiley & Sons, 2004).

If shorting is not to your liking or outside your risk tolerance levels, then staying in cash during a whipsaw “chop zone” market environment is often preferable to placing precious investment capital at risk. It is better to keep your powder dry, practice patience, and wait for the next window of opportunity on the long side than to trade in a manner in which you are not accustomed, especially in a volatile environment. But for more experienced, risk-tolerant investors, short-selling is always a potentially profitable option, IF you know what to look for.

Gil Morales and Dr. Chris Kacher are both managing directors of MoKa Investors LLC and Virtue of Selfish Investing, LLC, cofounders of www.selfishinvesting.com and co-authors of “Trade Like An O’Neil Disciple: How We Made 18,000% in the Stock Market” (Wiley, August, 2010).