A Hole in Our Hearts

Gil Gutknecht
|
Posted: Feb 20, 2021 2:00 AM
Share   Tweet
The opinions expressed by columnists are their own and do not necessarily represent the views of Townhall.com. 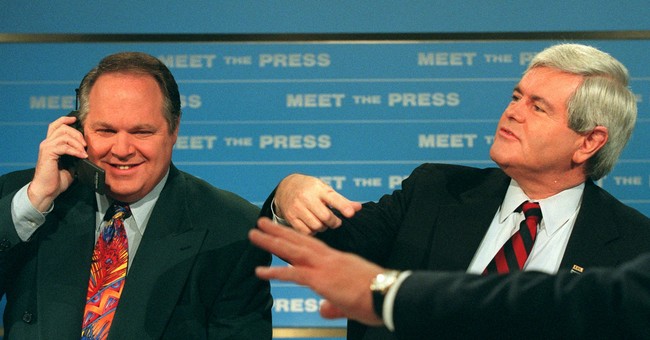 With talent on loan from God. Cynics may think it coincidence that God chose Ash Wednesday to call that loan. He has taken his good and noble servant home. That great voice on the right has now gone silent. It cannot be replaced.

Tens of millions have a huge hole in our hearts today. We remember specific segments of shows, what he said and where we were when we heard them. Our emptiness is multiplied as we now confront the prospect of a three-hour hole in our days.

Rush gave me and many the courage to be more than we thought we could be. He inspired us. I met Rush at a reception after the election of 1994. He was invited to speak to our freshman class. We had ushered in the first Republican Congressional majority in 40 years. We awarded him a pin making him a fellow Majority Maker, recognizing the critical role he had played, pushing and pulling us over the finish line.

Our class helped accomplish some big things. We led the march through the Contract with America. We reformed welfare, requiring work. Despite the critics who said it couldn’t be done, we cut taxes AND balanced the federal budget. We even paid down over half a trillion dollars of publicly held debt. How much of that would have happened without our chubby cheerleader on the radio? No one can say.

Sadly and predictably Rush’s critics have responded with gleeful joy. Sad because they refused to listen and missed their chance to learn from a master. Like the song about Vincent van Gogh; they would not listen, they’re not listening still. Perhaps they never will.

They preferred cursing the darkness. The angry Left never argued his facts. How could they? Instead, they mocked and vilified Rush. It was their cheap substitute for engaging in rational debate. Ironically, their vindictiveness served to prove the strength of his arguments.

The critics will never understand his enormous success. They think he created an audience of over 30,000,000. That we were all mind-numbed robots. Of course, it was just the opposite. We were thinkers and readers. We found him.

Rush was a great communicator. He understood the power of words. They could be weapons in the battle for our national future. Using the right words, mixed with clear logic and an optimistic approach made his words powerful indeed.

He was also a great teacher. Using interesting and sometimes personal examples he taught history, civics and psychology. Rush understood that his students were volunteers and they could leave the classroom anytime they chose. He respected his audience. He couldn’t preach, he had to persuade.

Of all the lessons he taught, the most important was the last one. He taught us how to deal with the final chapter of life. He faced the inevitable with dignity and grace. He kept us informed as he shouldered on through his treatment. He never became maudlin or played a cancer patient on air. There had to have been dark times, but due in part to his faith, Rush remained strong.

If Rush cannot be replaced or even succeeded then he must be recycled. His words have been recorded. Most of what he had to say is as relevant today as it was years ago. Just as Seinfeld re-runs remain popular, material can be repackaged into programs that will continue to draw huge audiences for years to come. We hear the EIB team will be allowed to mine those thirty years of pure gold. It will fill the huge hole in our days and help educate the next generation of Rush babies.

Americans of all stripes need his voice now more than ever.

Author's note: The author was a member of the freshman class for the 104th Congress and remains a committed Ditto Head.