Gil Gutknecht
|
Posted: May 26, 2019 12:01 AM
Share   Tweet
The opinions expressed by columnists are their own and do not necessarily represent the views of Townhall.com. 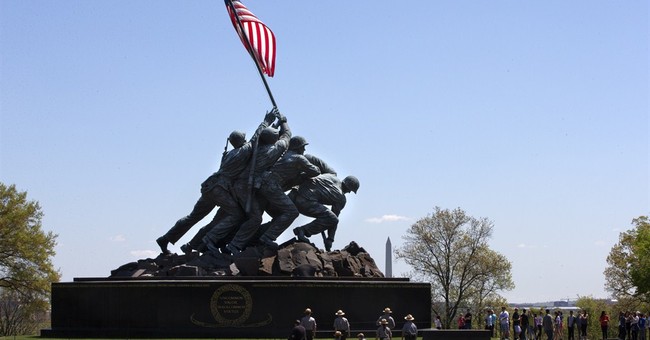 It is impossible for us to imagine what it was really like to have been locked in a desperate fight on that small island in the Pacific. When they mustered out as Marines, they were young and idealistic. When they hit the beaches at Iwo Jima, most were still in their teens. After the guns finally went silent, the survivors were men. Men as hard as diamonds. They had seen and done unimaginable things. They changed the course of the war and were themselves, forever changed.

We are left to wonder if the War Department understood the enormous price that would be paid to take that small island. Most of the names of those boys have been lost to history. The Marine Corp War Memorial is a monument to their courage and sacrifice. Just north of Arlington Cemetery stands the sculpture created by artist Felix de Weldon, himself a Navy man. It features six Marines raising the flag over Mount Suribachi. They represent all the Marines who have sacrificed for us.

It is appropriate that we pause and reflect on that sacrifice this Memorial weekend. Our thanks to James Bradley of Antigo, Wisconsin. In Bradley’s book, Flags of our Fathers he tells the stories of those young men. For decades, it was reported that his father John was one of the six flag raisers. The Brass pulled the rug out, concluding that his father was not among the six in the iconic photo well after his book became a best seller.

His father, John Bradley was a Navy Corpsman (medic). He probably went up  Suribachi with the others in the event someone took a hit. He likely was a part of the first flag raising which was not photographed. During the fighting, he held and comforted scores of young men as they took their last breath. John eschewed his celebrity. He refused interviews saying that the real heroes were the ones who didn’t come back.

Harlon Block is one of the six. He was an all-state football player. When his nation called, he enlisted along with several teammates. He learned that war was no game. Harlon helped lift the flag over Iwo Jima. But, he died in later fighting with his intestines in his hands. He was twenty-one.

Then there is Sergeant Mike Strank. He was called the “old man” because he was older than the kids in his unit. Mike wasn’t some gung ho, “lets go kill the bastards,”  He motivated his boys by telling them, “You do what I say, and I’ll get you home to your mothers.” He survived Iwo Jima and the war. He was twenty-four when he helped raise the flag.

Rene Gagnon was from New Hampshire. Inside the webbing of Rene’s helmet, he carried a photograph of his girlfriend. Rene put it in there for protection. He believed she was good luck and he was scared. He survived to return home to Mom and his good luck charm. He was only eighteen when he raised the flag.

Next, is a Pima Indian from Arizona. Ira Hayes was immortalized, not just in sculpture, but also in a song by Johnny Cash. He survived Iwo Jima and the war. After the war he was invited to the White House by President Truman where he was recognized as a hero. He later told reporters, “How can I feel like a hero when 250 of my buddies hit the island with me and only twenty-seven of us walked off alive?” The flashbacks and nightmares of the horrors proved to be too much for Ira. He took to the bottle and drowned in a puddle of rainwater ten years after the war. He was twenty-two when he waded ashore.

The last figure is Franklin Sousley from Hilltop, Kentucky, a “fun-lovin’ hillbilly boy.” He was a prankster. After raising the flag, Franklin gave his life on Iwo Jima. Neighbors reported that they could hear his mother’s screams all through the night when the telegram arrived with the tragic news. Franklin’s body was returned to Kentucky for burial. He was nineteen.

The surviving boys came back as men and as national heroes. 7,000 of their comrades died on that island. The heaviest casualties in the history of the Corps.

There remains mystery about another legend surrounding the monument. A story has circulated about a group of school children that was visiting the Memorial. One child counted the hands raising the flag and asked why there were thirteen hands? The tour guide is reported to have answered, “The thirteenth hand is the hand of God.” Snopes now says that legend is mostly urban. Maybe the girl did not see the thirteenth hand. Perhaps she did.

Either way, the Memorial should cause every American to be thankful to all those brave boys who sacrificed so much, securing liberty around the globe. Especially on Memorial Day, we should say a special prayer for them and give thanks to Almighty God for the freedom we enjoy today. Our freedoms will be secure as long as we remain, like those Marines, ever faithful. Semper Fidelis.

Gil Gutknecht served six terms each in the Minnesota and the U.S. House of Representatives. He writes about healthcare and political issues of the day.