The Difference is Energy

Gil Gutknecht
|
Posted: Aug 26, 2018 12:01 AM
Share   Tweet
The opinions expressed by columnists are their own and do not necessarily represent the views of Townhall.com. 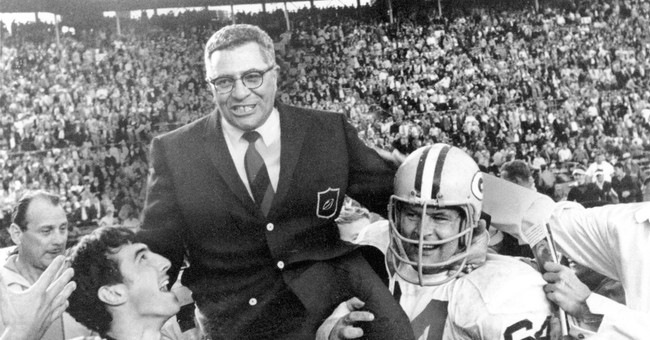 Legendary coach Vince Lombardi was famous for his four-minute homilies. He would conclude team meetings with a story or analogy that would illustrate a point that he wanted his players to remember. Some of his remarks have become the centerpiece of motivational quotes used in business ever since.

Quality control experts particularly like Lombardi’s, “We will pursue perfection and we will chase it relentlessly. Knowing all the while that we can never achieve it. But in the process, we will find excellence.”

One of his sermons was so memorable that many of those teammates can recite it almost word for word, even today. Lombardi compared the teams in the NFL, the winners and the losers. He said that if you compared all of the teams in the league and you measured them and timed them, you would find that in reality there isn’t much difference between between the first place team and the last place team.

Then he just left the room to let them think about it.

Like Lombardi, Donald Trump is a high-energy guy. He brought the $100 million campaign of Jeb Bush to a merciful end by simply calling him low energy. Remember Jeb! It stuck like fly paper. Trump proved Lombardi right. He bested an impressive field and was elected to the Presidency largely because he was able to transfer his personal energy. He energized a large block of voters who had been ignored, demeaned and were dormant for years and he turned them into winners.

Unfortunately, President Trump has been unable to generate any real energy among the Republican Leadership on Capitol Hill. Control of the House is in jeopardy, not because of Trump. It is in play because the leaders look and sound more like Jeb. They don’t understand the Lombardi principle. Other than tax reform, they’ve shown little interest in the rest of the Trump agenda. Whether it was building the wall or replacing ObamaCare, we’ve seen lukewarm support and a low energy effort. That won’t get it done. It may turn them into losers.

Even with the unprecedented bias and abuse that has been exposed at the highest levels of the FBI and the Department of Justice, our leaders seem unable to muster any real outrage. They treat the Mueller probe as if it were legitimate.

It’s almost as if they really don’t want their base to include those millions of working class Americans who stand in long lines to attend Trump rallies. Perhaps they take them for granted. But Republicans desperately need that energy and passion if they are to hold the House and pick up seats in the Senate.

Trump voters don’t ask for much from Congress. All they really want is for members to do what they said they would do. Just give them a glimpse of hope. Hope that in the next Congress leaders will find the energy to get more of the Trump agenda enacted and signed into law.

Is that too much to ask?

Jim Jordan gets it. He understands exactly what Lombardi meant. Left to their own devices, his colleagues will not elect him their next leader. We need to turn up the heat on Republican candidates this fall to help them see the light. They need to hear that we expect them to vote for leaders more in the mold of the Donald and less like low energy apologists.

Energy is the indispensable factor. That energy is going to have to come from us. Lombardi set high expectations. So should we.

Gil Gutknecht served six terms in the U.S. House as a Republican from Minnesota. Earlier in his career he worked for the former offensive captain of the Green Bay Packers Bob Skoronski, who shared many examples of Lombardi’s famous homilies.