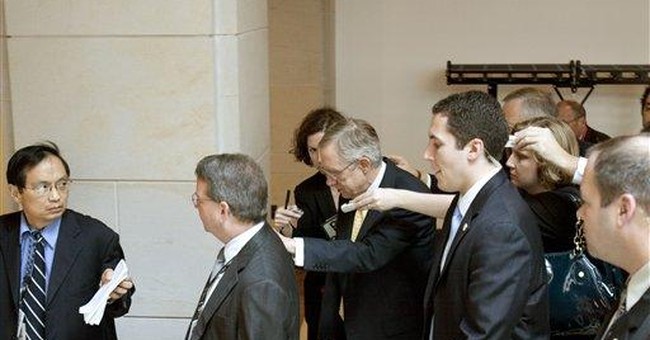 PHOENIX -- In 2006, long before there was an Obama administration determined to impose a command-and-control federal health care system, a young orthopedic surgeon walked into the Goldwater Institute here with an idea. The institute, America's most potent advocate of limited government, embraced Eric Novack's idea for protecting Arizonans from health care coercion. In 2008, Arizonans voted on Novack's proposed amendment to the state's Constitution:

Proponents were outspent 5-1 by opponents who argued, meretriciously, that it would destroy Arizona's Medicaid program, with which many insurance companies have lucrative contracts. Nevertheless, the proposition lost by only 8,687 votes out of 2.1 million cast, and Arizonans will vote on essentially the same language next November.

But does not federal law trump state laws? Not necessarily. Clint Bolick, a Goldwater Institute attorney, says, "It is a bedrock principle of constitutional law that the federal Constitution established a floor for the protection of individual liberties; state constitutions may provide additional protections."

In 1997, the U.S. Supreme Court held that under the Constitution's system of "dual sovereignty," states' "retained sovereignty" empowers them to "remain independent and autonomous within their proper sphere of authority." The court has been critical of the "federalism costs" of intrusive federal policies, and recently has twice vindicated state sovereignty in ways pertinent to Novack's plan.

In 2006, the court overturned an interpretation of federal law that would have nullified Oregon's "right to die" statute. The court said states have considerable latitude in regulating medical standards, which historically have been primarily state responsibilities.

In 2000, Arizona voters' endorsed an English immersion policy for students for whom English is a second language. Federal courts had issued an injunction against such policies because they conflicted with federal requirements of bilingual education. This year, however, the Supreme Court mandated reconsideration of the injunctions because they affect "areas of core state responsibility."

The court says the constitutional privacy right protects personal "autonomy" regarding "the most intimate and personal choices." The right was enunciated largely at the behest of liberals eager to establish abortion rights. Liberals may think, but the court has never held, that the privacy right protects only doctor-patient transactions pertaining to abortion. David Rivkin and Lee Casey, Justice Department officials under the Reagan and first Bush administrations, ask: If government cannot proscribe or even "unduly burden" -- the court's formulation -- access to abortion, how can government limit other important medical choices?

Democrats' health bills depend on forcing individuals to buy insurance or face severe fines or imprisonment. In 1994, the Congressional Budget Office said forcing individuals to buy insurance would be "an unprecedented form of federal action," adding: "The government has never required people to buy any good or service as a condition of lawful residence in the United States."

This year, the Congressional Research Service delicately said "it is a novel issue whether Congress may use the (Commerce) Clause to require an individual to purchase a good or service." Congress has the constitutional power to "regulate commerce ... among the several states." But a Federalist Society study by Peter Urbanowicz and Dennis Smith judges it perverse to exercise coercion under the Commerce Clause "on an individual who chooses not to undertake a commercial transaction." As Sen. Orrin Hatch, R-Utah, says, there is "a fundamental difference between regulating activities in which individuals choose to engage" -- e.g, drivers can be required to buy auto insurance -- "and requiring such activities" just because an individual exists.

House Majority Leader Steny Hoyer, D-Md., says Congress can tax -- i.e., punish -- people who do not buy insurance because the Constitution empowers Congress to tax for "the general welfare." So, could Congress tax persons who do not exercise or eat their spinach?

When asked whether any compulsory insurance purchases are constitutional, Speaker Nancy Pelosi was genuinely astonished: "Are you serious? Are you serious?" In 1803, in Marbury v. Madison, Chief Justice John Marshall wrote, "The powers of the legislature are defined and limited; and that those limits may not be mistaken, or forgotten, the Constitution is written." He was serious.