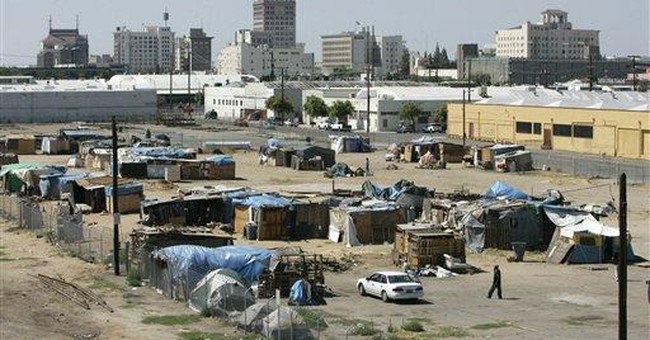 WASHINGTON -- Economic policy, which became startling when Washington began buying automobile companies, has become surreal now that disappointment with the results of the second stimulus is stirring talk about the need for a ... second stimulus. Elsewhere, it requires centuries to bleach mankind's memory; in Washington, 17 months suffice: In February 2008, President George W. Bush and Speaker Nancy Pelosi, who normally were at daggers drawn, agreed that a $168 billion stimulus -- this was Stimulus I -- would be the "booster shot" the economy needed. Unemployment then was 4.8 percent.

In January, the administration, shiny as a new dime and bursting with brains, said that unless another stimulus -- Stimulus II wound up involving $787 billion -- was passed immediately, unemployment, which then was 7.6 percent, would reach 9 percent by 2010. But halfway through 2009, the rate is 9.5. For the first time since the now 16-nation Eurozone was established in 1999, the unemployment rate in America is as high as it is in that region, which Americans once considered a cautionary lesson in the wages of sin, understood as excessive taxation and regulation.

"Everyone guessed wrong" about the economy's weakness, says the vice president, explaining why Stimulus II has not yielded anticipated benefits. Joe Biden is beguiling when unfiltered by calculation, as he often is and as he was when he spoke about guessing ("Meet the Press," June 14) and how everyone "misread" the economy ("This Week," July 5). To be fair, economics is a science of single instances, which means it is hardly a science. And it is least like one when we most crave certainty from it -- when there is a huge and unprecedented event and educated guessing is the best anyone can do.

Let's guess: Will a person or institution looking for a place to invest $1 billion seek opportunities in the United States, where policy decisions are deliberately increasing taxes, debt, regulations and the cost of energy, and soon will increase the cost of borrowing and hiring? Or will the investor look at, say, India. It is the least urbanized major country -- 70 percent of Indians live in rural areas, 50 percent on farms -- so the modernizing and productivity-enhancing movement from the countryside to the city is in its infancy. This nation of 1.2 billion people has a savings rate of 25 percent to 30 percent, and fewer than 20 million credit cards. Which nation, India or the United States, is apt to have the higher economic growth over the next decade?

Yet while government diminishes America's comparative advantages, liberals are clamoring for ... higher taxes. Partly because of changes endorsed by presidents from Ronald Reagan to Barack Obama, approximately 60 percent of taxpayers now pay either no income tax (43 percent) or less than 5 percent of their income. Because one cannot raise significant money by that tax without nicking the middle class, or without bringing millions of people back onto the income tax rolls, attention is turning to a value-added tax.

A VAT is levied at every stage of production. Like the cap-and-trade regime being constructed, a VAT is a liberal politician's delight: It taxes everything, but opaquely.

At the June 29 White House briefing, press secretary Robert Gibbs was asked, with reference to health care legislation, if the president's pledge not to raise taxes on couples making less than $250,000 is "still active." Gibbs answered: "We are going to let the process work its way through." What is your guess?