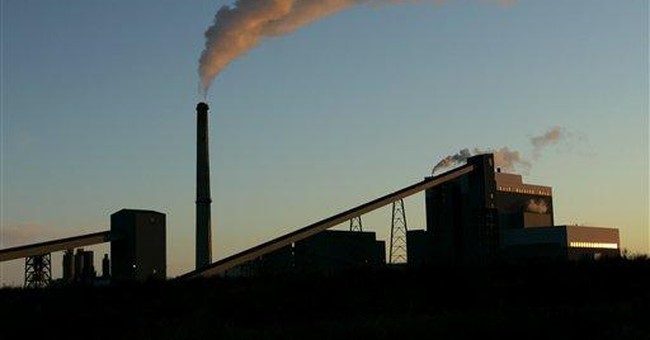 WASHINGTON -- There once was an Indianapolis concert featuring 50 pianos. Splendid instruments, pianos. Still, 50 might have been excessive. As is today's chorus summoning us to save the planet.

In the history of developed democracies with literate publics served by mass media, there is no precedent for today's media enlistment in the crusade to promote global warming "awareness." Concerning this, journalism, which fancies itself skeptical and nonconforming, is neither.

The incessant hectoring by the media-political complex's "consciousness-raising" campaign has provoked a comic riposte in the form of "The Goode Family," an animated ABC entertainment program on Wednesdays at 9 p.m. Eastern time. Cartoons seem, alas, to be the most effective means of seizing a mass audience's attention. Still, the program is welcome evidence of the bursting of what has been called "the green bubble."

Gerald and Helen Goode, their children and dog Che (when supervised, he is a vegan; when unsupervised, squirrels disappear) live in a college town, where T-shirts and other media instruct ("Meat is murder"), admonish ("Don't kill wood") and exhort ("Support our troops ... and their opponents"). The college, where Gerald works, gives students tenure. And when Gerald says his department needs money to raise the percentage of minority employees, his boss cheerily replies, "Or we could just fire three white guys. Everybody wins!" Helen shops at the One Earth store, where community shaming enforces social responsibility: "Attention One Earth shoppers, the driver of the SUV is in aisle four. He's wearing the baseball cap."

The New York Times television critic disapproves. The show "feels aggressively off-kilter with the current mood, as if it had been incubated in the early to mid-'90s, when it was possible to find global-warming skeptics among even the reasonable and informed." That is a perfect (because completely complacent) sample of the grating smugness of the planet-savers, delivered by an entertainment writer: Reasonable dissent is impossible. Cue the pianos.

"The Goode Family" does not threaten Jonathan Swift's standing as the premier English-language satirist. But when a Goode child apologizes to his parent for driving too much, and the parent responds, "It's OK ... what's important is that you feel guilty about it," the program touches upon an important phenomenon: ecology as psychology.

In "The Green Bubble: Why Environmentalism Keeps Imploding" (The New Republic, May 20), Ted Nordhaus and Michael Shellenberger, authors of "Break Through: Why We Can't Leave Saving the Planet to Environmentalists," say that a few years ago, being green "moved beyond politics." Gestures -- bringing reusable grocery bags to the store, purchasing a $4 heirloom tomato, inflating tires, weatherizing windows -- "gained fresh urgency" and "were suddenly infused with grand significance."

Green consumption became "positional consumption" that identified the consumer as a member of a moral and intellectual elite. A 2007 survey found that 57 percent of Prius purchasers said they bought their car because "it makes a statement about me." Honda, alert to the bull market in status effects, reshaped its 2009 Insight hybrid to look like a Prius.

Nordhaus and Shellenberger note the telling "insignificance," as environmental measures, of planting gardens or using fluorescent bulbs. Their significance is therapeutic, but not for the planet. They make people feel better:

"After all, we can't escape the fact that we depend on an infrastructure -- roads, buildings, sewage systems, power plants, electrical grids, etc. -- that requires huge quantities of fossil fuels. But the ecological irrelevance of these practices was beside the point."

The point of "utopian environmentalism" was to reduce guilt. During the green bubble, many Americans became "captivated by the twin thoughts that human civilization could soon come crashing down -- and that we are on the cusp of a sudden leap forward in consciousness, one that will allow us to heal ourselves, our society, and our planet. Apocalyptic fears meld seamlessly into utopian hopes." Suddenly, commonplace acts -- e.g., buying light bulbs -- infused pedestrian lives with cosmic importance. But:

"Greens often note that the changing global climate will have the greatest impact on the world's poor; they neglect to mention that the poor also have the most to gain from development fueled by cheap fossil fuels like coal. For the poor, the climate is already dangerous."

Now, say Nordhaus and Shellenberger, "the green bubble" has burst, pricked by Americans' intensified reluctance to pursue greenness at a cost to economic growth. The dark side of utopianism is "escapism and a disengagement from reality that marks all bubbles, green or financial." Re-engagement with reality is among the recession's benefits.