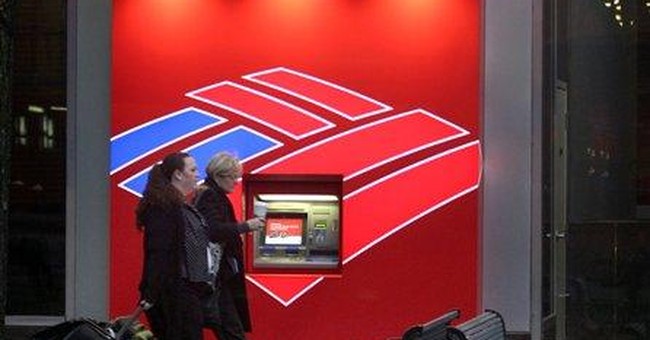 WASHINGTON -- Greed, we are agreed, is bad. It also is strange. It has long been included among the Seven Deadly Sins, which suggests that it is a universal and perennial facet of the human fabric. But the quantity of it, at least in America, responds to political cycles. Greed grows when Republicans hold the presidency. They did so throughout the 1980s, and no less an authority on probity than American journalism named it the Decade of Greed. Furthermore, everyone knows we are in our current economic pickle because greed, which slept through the Clinton administration, was awakened by the Bush administration's tax cuts and deregulation. The day after the 2008 elections, The New York Times (see above: probity, authority thereon) ascribed America's economic unpleasantness to "greed and an orgy of deregulation." The political pendulum swings, so Republicans will capture the presidency now and then, igniting greed revivals.

In the secondary market for tickets to entertainment events, an arena of people sometimes called scalpers, greed exists. So everyone knows that government regulation is required. Everyone except David Harrington, a Kenyon College economist. Writing in Regulation quarterly, he argues that deregulated markets punish greed. Markets know it when they see it.

Studying the Internet site Stubhub, which is owned by eBay, Harrington monitored the secondary market in Ohio State University football tickets for the Oct. 25, 2008, game against Penn State that was attended by a record crowd of 105,771. Stubhub acts as a broker, charging 15 percent from buyers and 10 percent from sellers, who can charge whatever they choose. Generally, a ticket's value depends on the seat's location -- the lower in the stadium and the closer to the 50-yard line the better.

Harrington collected two sets of information, one on Oct. 13, 12 days before the game, the other on Oct. 21, four days before. On Oct. 13 there were 346 sellers offering 682 tickets. Eight days later, 411 sellers were offering 845 tickets. In the interval, Ohio State beat Michigan State and undefeated Penn State beat Michigan, intensifying fans' interest in the game.

Yet the average price of the tickets offered declined from $359 to $304. This was partly because the quality (seat location) of the remaining tickets declined. Also the number of selling days was becoming smaller. Seats at entertainment events are, like airline seats, a perishable inventory: When the plane takes off, or the game begins, the value of an unsold ticket becomes zero.

A greedy seller -- one who priced his tickets too high -- was less likely than other sellers were to sell them two weeks before the game. Hence he had to resort to much deeper discounts than others did as game day, and the potential worthlessness of his assets, drew near. The larger the number of seats available in the secondary market, and the more transparent that market is, thanks to the Internet, the more likely it is that greed will be punished.

To give the greedy their due, they perform a service: By overpricing, they preserve an eve-of-game supply of tickets for persons willing to pay a premium for last-minute impulse purchases. Unfortunately, such persons are apt to be richer than thee, hence presumptively greedy.

Perhaps it would be restful to give moral reasoning a rest and give economic reasoning a chance. Until recently, many states regulated "scalping" by limiting allowable markups of ticket prices, or by outlawing secondary markets for some events. Most of these states have repealed or relaxed those laws, even though a 1997 New York Times editorial demanded more aggressive enforcement of anti-scalping laws lest the public be victimized by "price-gouging ticket agents."

Actually, would-be price gougers are at the mercy of a public armed with information, which is what markets generate and communicate. Greed is worse than a moral defect, it is a cause of foolish pricing. That is why markets know it when they see it. And when markets are allowed to operate, greed generates its own punishment.