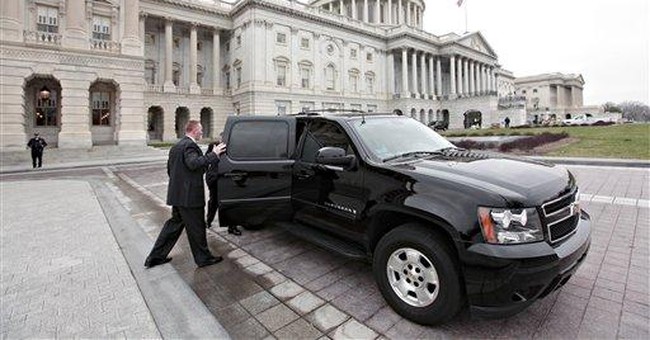 WASHINGTON -- The Constitution enumerates three requirements of those who would be president (they must be natural-born citizens, at least 35 and a resident within the country for 14 years) and now the government's thrashing about in the economy imposes a fourth: Presidents must be able to speak pluperfect nonsense with a straight face, lest the country understand what the government is doing. Obfuscation serves political salvation when what the government is doing includes promising that if Chrysler will sell itself to Fiat, U.S. taxpayers will lend that Italian firm $6 billion.

Barack Obama displayed reality-denying virtuosity last week when, announcing the cashiering of General Motors' CEO, and naming his replacement, and as the government was prompting selection of a new majority of GM's board of directors, and as the government announced the next deadline for GM to submit a more satisfactory viability plan than it submitted at the last faux deadline, and as the government kept the billions flowing to tide GM over until, well, whenever, the president said: "The United States government has no interest in running GM."

Actually, his administration prefers to do that rather than allow bankruptcy to infuriate the United Auto Workers union, which was pre-emptively grateful to Obama's administration with lavish contributions to candidate Obama. The president supposedly showed "toughness" in sacking a conspicuous member of a particularly unpopular little cohort, CEOs of big corporations. He will need more grit if, as his administration hints, this time it is serious, that its patience is wearing thin, that someday GM could face "controlled" or "prepackaged" or "surgical" bankruptcy. One suspects that those adjectives intimate that it will be faux bankruptcy, gentle in dealing with the UAW.

Last November, five months and $17.4 billion in auto bailouts ago, this column noted: "Some opponents of bankruptcy say: GM must not be allowed to fail before it perfects batteries for its electric-powered Volt, which supposedly is a key to the company's resurrection. This vehicle was concocted to serve GM's prolonged attempt to ingratiate itself with the few hundred environmentally obsessed automotive engineers in Congress. They have already voted tax credits of up to $7,500 for purchasers of such cars -- bribes that reveal doubts about consumer enthusiasm for them at a price that would reflect cost."

In December, GM, by then a mendicant groveling before its congressional masters, ran a full-page newspaper ad apologizing for having "disappointed" everyone, vowing to stop selling so many "pickups and SUVs" (which were 11 of GM's 20 most profitable products in 2008), and promising "revolutionary new products like the Chevrolet Volt." Another ad, which appeared before December and is still running, features a car attached to an electric cord, and says the Volt amounts to "reinventing the automobile."

Last week, in an unenthralled summary of GM's "viability" plan, Obama's administration said: "GM earns a large share of its profits from high-margin trucks and SUVs, which are vulnerable to a continuing shift in consumer preference to smaller vehicles. Additionally, while the Chevy Volt holds promise, it will likely be too expensive to be commercially successful in the short term."

The stunning shift in consumer preferences that should make the White House's freshly minted auto experts feel vulnerable has been reported under headlines such as "Like a Rock: Hybrid Car Sales Plummet" (Wall Street Journal, Dec. 9) and "Hybrid Car Sales Go from 60 to 0 at Breakneck Speed" (Los Angeles Times, March 17). Absent $4 gasoline, customers, those nuisances with their insufferable preferences, do not want the vehicles the politicians want them to want, even with manufacturers now offering large rebates and other incentives.

The two best-selling vehicles in America this year are large pickup trucks (Ford F-Series and Chevy Silverado). In February, Toyota sold 13,600 Tundra and Tacoma pickups and 7,232 Priuses. It sells the Prius at a loss, which it can afford to do because it makes pots of money selling pickups. Has the Car Designer in Chief, aka the president, considered the possibility that what he calls "the cars of tomorrow" will forever be that?