Political Malfeasance and the Financial Meltdown 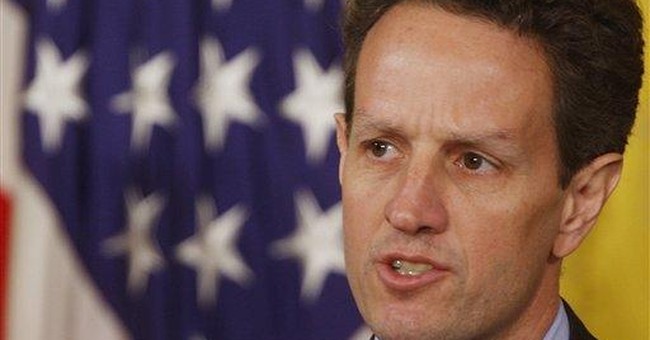 WASHINGTON -- With the braying of 328 yahoos -- members of the House of Representatives who voted for retroactive and punitive use of the tax code to confiscate legal earnings of a small unpopular group -- still reverberating, the Obama administration Monday invited private-sector investors to become business partners with the capricious and increasingly anti-constitutional government. This latest plan to unfreeze the financial system came almost half a year after Congress shoveled $700 billion into the Troubled Asset Relief Program, $325 billion of which has been spent without purchasing any toxic assets.

TARP funds have, however, semi-purchased, among many other things, two automobile companies (and, last week, some of their parts suppliers), which must amaze Sweden. That unlikely tutor of America regarding capitalist common sense has said, through a Cabinet minister, that the ailing Saab automobile company is on its own: "The Swedish state is not prepared to own car factories."

Another embarrassing auditor of American misgovernment is China, whose premier has rightly noted the unsustainable trajectory of America's high-consumption, low-savings economy. He has also decorously but clearly expressed sensible fears that his country's $1 trillion-plus of dollar-denominated assets might be devalued by America choosing, as banana republics have done, to use inflation for partial repudiation of improvidently incurred debts.

From Mexico, America is receiving needed instruction about fundamental rights and the rule of law. A leading Democrat trying to abolish the right of workers to secret ballots in unionization elections is California's Rep. George Miller who, with 15 other Democrats, in 2001 admonished Mexico: "The secret ballot is absolutely necessary in order to ensure that workers are not intimidated into voting for a union they might not otherwise choose." Last year, Mexico's highest court unanimously affirmed for Mexicans the right that Democrats want to strip from Americans.

Congress, with the approval of a president who has waxed censorious about his predecessor's imperious unilateralism in dealing with other nations, has shredded the North American Free Trade Agreement. Congress used the omnibus spending bill to abolish a program that was created as part of a protracted U.S. stall regarding compliance with its obligation to allow Mexican long-haul trucks on U.S roads. The program, testing the safety of Mexican trucking, became an embarrassment because it found Mexican trucking at least as safe as U.S. trucking. Mexico has resorted to protectionism -- tariffs on many U.S. goods -- in retaliation for Democrats' protection of the Teamsters union.

NAFTA, like all treaties, is the "supreme law of the land." So says the Constitution. It is, however, a cobweb constraint on a Congress that, ignoring the document's unambiguous stipulations that the House shall be composed of members chosen "by the people of the several states," is voting to pretend that the District of Columbia is a state. Hence it supposedly can have a Democratic member of the House and, down the descending road, two Democratic senators. Congress rationalizes this anti-constitutional willfulness by citing the Constitution's language that each house shall be the judge of the "qualifications" of its members and Congress can "exercise exclusive legislation" over the District. What, then, prevents Congress from giving House and Senate seats to Yellowstone National Park, over which Congress exercises exclusive legislation? Only Congress' capacity for embarrassment. So, not much.

The Federal Reserve, by long practice rather than law, has been insulated from politics in performing its fundamental function of preserving the currency as a store of value -- preventing inflation. Now, however, by undertaking hitherto uncontemplated functions, it has become an appendage of the executive branch. The coming costs, in political manipulation of the money supply, of this forfeiture of independence could be steep.

Jefferson warned that "great innovations should not be forced on slender majorities." But Democrats, who trace their party's pedigree to Jefferson, are contemplating using "reconciliation" -- a legislative maneuver abused by both parties to severely truncate debate and limit the minority's right to resist -- to impose vast and controversial changes on the 17 percent of the economy that is health care. When the Congressional Budget Office announced that the president's budget underestimates by $2.3 trillion the likely deficits over the next decade, his budget director, Peter Orszag, said: All long-range budget forecasts are notoriously unreliable -- so rely on ours.

This is but a partial list of recent lawlessness, situational constitutionalism and institutional derangement. Such political malfeasance is pertinent to the financial meltdown as the administration, desperately seeking confidence, tries to stabilize the economy by vastly enlarging government's role in it.