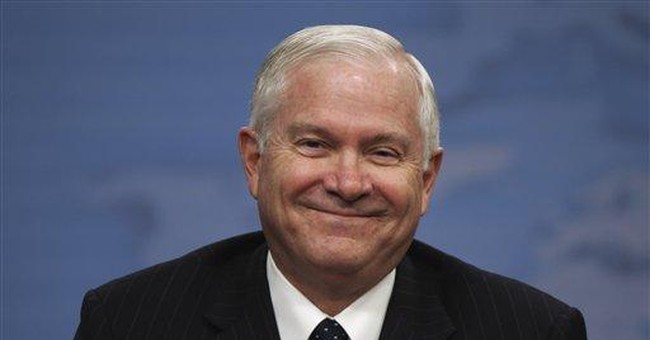 WASHINGTON -- With President U.S. Grant's long, narrow desk behind him, he works at Gen. John Pershing's spacious partners desk, and converses with guests at a round table used by Secretary of War Jefferson Davis. Defense Secretary Robert Gates, part of the reassuring furniture of government for most of 42 years, will soon serve his eighth president in a career that began in 1966 when Gates joined the CIA, of which he became director 25 years later.

On Nov. 1, 1979, he was note-taker when Zbigniew Brzezinski, President Carter's national security adviser, met in Algiers with representatives of Iran's radical Islamic regime that had just overthrown the shah, who had fled to the West. Brzezinski assured the Iranians that America would recognize their revolution, sell them weapons the shah had wanted and embrace normal relations. They demanded the shah. Brzezinski rejected that as dishonorable. Three days later, U.S. diplomats were taken hostage in Tehran.

"I actually think," Gates says, "there is a reasonable chance" some combination of diplomatic and economic carrots and sticks can deter Iran, with its ramshackle economy and restive citizenry, from acquiring nuclear weapons, even though its nuclear quest began under the shah. Will other nations assist U.S. nonproliferation efforts? Gates answers obliquely, noting that Vladimir Putin told him that Iran is Russia's biggest security threat. And, he says, Iran might yet recognize that acquiring nuclear weapons would be a net subtraction from its security, if that acquisition provoked nearby nations to become nuclear powers.

Regarding Iraq, Gates is parsimonious with his confidence, noting that "the multisectarian democracy has not sunk very deep roots yet." He stresses, however, that there is bipartisan congressional support for "a long-term residual presence" of perhaps 40,000 U.S. forces in Iraq, and that the president-elect's recent statements have not precluded that. Such a presence "for decades" has, he says, followed major U.S. military operations since 1945, other than in Vietnam. And he says, "Look at how long Britain has had troops in Cyprus."

Regarding Afghanistan, Gates recalls with a flicker of a smile that two decades ago, when "we were the quartermaster for the mujahedeen" fighting the Soviet army, "I was pumping arms across the border to some of the same guys" America is dealing with today. He is encouraged by the "dramatic expansion" of Afghanistan's national army and police. But when asked if Afghanistan has ever had a national government whose writ ran nationwide, he says "no."

Afghanistan, which is almost as large as Texas, has fewer U.S. troops (34,000) than New York City has police (35,800). Asked if NATO, which will celebrate its 60th birthday in 2009, might die from its cumulative futilities in Afghanistan, Gates is acerbic: Afghanistan is the "top operational priority" of NATO, "which must never forget that it is a military alliance, not a talk shop." He says NATO nations other than America have approximately 2.5 million people under arms but protracted wheedling is required to get even 10,000 more for Afghanistan, and they come encumbered with "caveats" that cripple their usefulness.

Still, he thinks there will have to be American boots on Afghanistan's soil for many years because it would be "very difficult" to use "offshore" operations -- special forces, cruise missiles and other airstrikes -- to prevent the country from again becoming an incubator of terrorist capabilities. Noting that the first attack on the World Trade Center was in 1993, he says: "We paid a price quickly for turning our backs on Afghanistan after 1989." For that, he says, he shares the blame.

Asked what worries him most, he unhesitatingly answers with one word: "Pakistan." That nation's western region seethes with threats to the regime, and there are groups that hope terrorist attacks such as those in Mumbai can, like the assassination in Sarajevo in 1914, spark a conflagration.

Still, he says he used "an unfortunate phrase" when he recently said that the world in 1970 was "amateur night" compared to today. He meant that although Henry Kissinger deftly handled three simultaneous challenges (Syria attacking Jordan, turmoil in Lebanon, the Soviets building a submarine base in Cuba), back then crises "had a beginning and an end." Today's festering crises, from North Korea to Kosovo, "come up on the table and don't go off." Fortunately, Gates' experiences in the cauldron of crisis are as impressive as the provenances of his desks and tables.