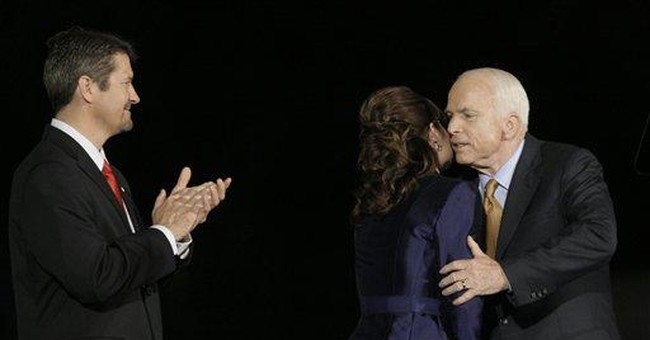 WASHINGTON -- Graciously conceding as vice president in 1980, Walter Mondale spoke of voters wielding "their staggering power." This year's energized electorate did that, thereby proving, among other things, that bad governance is good for turnout, a fact that should give pause to people who think high rates of voting are unambiguous indicators of civic health.

In 2000, George W. Bush won 11 million (29 percent) more votes than Bob Dole won in 1996; in 2004, Bush won 11.6 million (23 percent) more than in 2000. This year the Republican surge receded. It is difficult running against Washington while one's party controls the presidency. And given that the morning news on Election Day was that October car sales and manufacturing activity were at their lowest levels in nearly 20 years, the evening news was unsurprising.

Although John McCain's loss was not as numerically stunning as the 1964 defeat of Barry Goldwater, who won 16 fewer states and 122 fewer electoral votes than McCain seems to have won as of this writing, Tuesday's trouncing was more dispiriting for conservatives. Goldwater's loss was constructive; it invigorated his party by reorienting it ideologically. McCain's loss was sterile, containing no seeds of intellectual rebirth.

In 1980, Republicans at last offered (in Goldwater's words) "a choice, not an echo." Goldwater's nomination 16 years earlier had been a leading indicator -- and one cause -- of the country's ideological sorting out. Today, conservative Democrats and liberal Republicans are comparably scarce.

As this is being written, Republicans seem to have lost a total of 55 House and 11 Senate seats in the last two elections. These are the worst Republican results in consecutive elections since the Depression-era elections of 1930 and 1932 (153 and 22), which presaged exile from the presidency until 1953. If, as seems likely at this writing, in January congressional Republicans have 177 representatives and 44 senators, they will be weaker than at any time since after the 1976 elections, when they were outnumbered in the House 292-143 and the Senate 61-38.

Since John Kennedy was elected from Massachusetts in 1960, all of the elected presidents (leaving aside Gerald Ford), before Tuesday, came from Georgia, Arkansas, Texas and Southern California. In 1960, there were no Republican senators from the South. (In 1961, John Tower of Texas became the first since Reconstruction.) But when the next Congress convenes, 19 of the probable 44 Republican senators -- 43 percent of them -- will be from the South, understood as including Oklahoma and Kentucky. The South is beginning to look less like the firm foundation of a national party than the embattled redoubt of a regional one.

The conservative ascendancy that was achieved in 1980 reflected a broad consensus favoring government more robust abroad and less ambitious at home -- roughly the reverse of Tuesday's consensus. But conservatives should note what their current condition demonstrates: Opinion is shiftable sand. It can be shifted, as Goldwater understood, by ideas, and by the other party overreaching, which the heavily Democratic Congress elected in 1964 promptly did.