Change We Must Confront 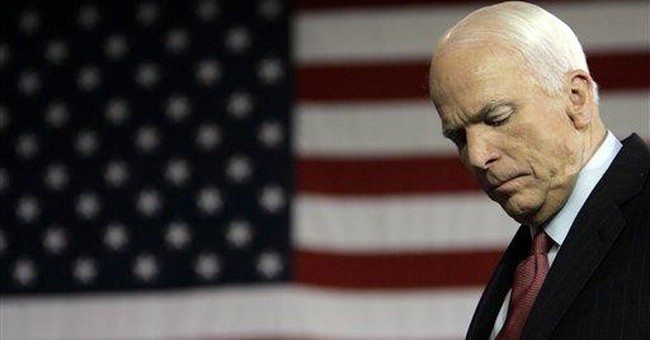 WASHINGTON -- Last August, John McCain's campaign was a guttering candle, out of money but flush with half-baked ideas that were unlikely to be improved by further baking. Anyway, to have many ideas is to have too many for a campaign's concluding sprint, and McCain's revival has not been robust enough to bring him even with Barack Obama. Now McCain's rejuvenated hopes rest on his ability to recast this election, focusing it on who should lead America in a world suddenly darkened by Russia's war of European conquest.

To begin the recasting, he should weed from the unkempt garden of his political thinking the populism which often seems like mere attitudinizing redeemed by insincerity. His silliness about sinful Wall Street and exploitative corporations cannot compete with Democratic entrees in the nonsense sweepstakes. Furthermore, his populism subverts his strength -- the perception that although he is an acquired taste, he is serious, hence incapable of self-celebratory froth such as "we are the ones we've been waiting for."

McCain's populism, if such there must be, should be distilled into one proposal that would be popular and, unlike most populism, not economically injurious. The proposal, for which he has expressed sympathy, is: No officer of any corporation receiving a federal subsidy, broadly defined, can be paid more than the highest federal civil servant ($124,010 for a GS-15). This would abruptly halt the galloping expansion of private economic entities -- is GM next? -- eager to become, in effect, joint ventures with Washington.

Next, McCain should make an asset of an inevitability by promising two presidential vetoes. The inevitability is enlarged Democratic congressional majorities in 2009. Americans suffer political astigmatism. They squint at Washington, seeing an incompetent cornucopia that is too big but which should expand to give them more blessings. Their voting behavior, however, generally conforms to their professed suspicion about unchecked power in Washington: In 31 election cycles since the restoration of normal politics after the Second World War, 19 of them produced divided government -- the executive and legislative branches not controlled by the same party.

Two Democratic priorities in the next Congress would placate two factions that hold the party's leash -- organized labor and the far left. One is abolition of workers' right to secret ballots in unionization elections. The other is restoration of the "fairness doctrine" in order to kill talk radio, on which liberals cannot compete. The doctrine would expose broadcasters to endless threats of litigation over government rules about how many views must be presented, on which issues, by whom, for how long and in what manner.

By promising to veto both of these forthcoming assaults on fundamental freedoms, McCain would give specific content to voters' usually unfocused fear of one-party government. Then, having delighted conservatives, who have thus far curbed their enthusiasm for him, he should make this challenge:

He should ask Obama to join him in a town meeting on lessons from Russia's aggression. Both candidates favor NATO membership for Georgia and Ukraine, perhaps Vladimir Putin's next victim. But does Russia's behavior cause Obama to rethink reliance on "soft power" -- dialogue, disapproval, diplomacy, economic carrots and sticks -- which Putin considers almost an oxymoron? Does Russia's resort to military coercion, and its arsenal of intercontinental ballistic missiles, cause Obama to revise his resistance to missile defense? Obama, unlike McCain, believes Russia belongs in the G-8. Does Obama think Russia should be admitted to the World Trade Organization? Does Obama consider Putin helpful regarding Iran? Does Obama accept the description of the G-8 as an organization of the largest "industrialized democracies"? Does he think China should be admitted?

McCain, like Republicans generally, reveres Ronald Reagan. But such reverence seems to involve an obligatory sunniness, which suits neither McCain nor this moment. A great political thinker of the last century, Raymond Aron, was right: "What passes for optimism is most often the effect of an intellectual error." McCain must convince voters that Obama's complacent confidence in the taming abilities of soft power is the effect of liberalism's scary sentimentalism about a dangerous thing, human nature, and a fiction, "the community of nations."

McCain is hardly the change many people have been eagerly waiting for, but Putin is part of the change we must confront. Until Russian tanks rolled into Georgia, it seemed that not even the Democratic Party could lose this election. But it might if McCain can make it turn on the question of who is ornery enough to give Putin a convincing, deterring telephone call at 3 a.m.