A Primary Season of Narcissism 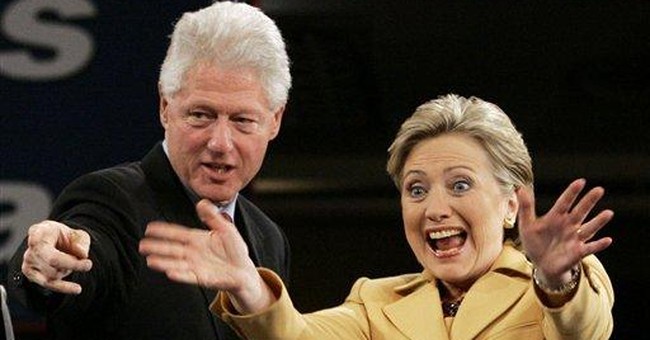 WASHINGTON -- With metronomic regularity -- the rhythm may arise from some strangely shared metabolic urge, which may explain the mystery of their marriage -- the Clintons say things that remind voters of the aesthetic reason for recoiling from them. Aesthetic considerations even cause many Republicans -- a coarse commercial breed, they are notoriously insensitive to higher things, but they are not immune to the repulsive -- to hope, against three decades of evidence, that Democrats can be sufficiently sensible to nominate Barack Obama, even though Hillary Clinton would be more vulnerable to John McCain.

Last week, in his ten-thumbed attempt to prevent his wife's Louisiana loss, Bill Clinton said that Obama has made "an explicit argument that the '90s weren't much better than this decade." The phrase "explicit argument" was an exquisitely Clintonian touch, signaling to seasoned decoders of Clintonisms that, no matter how diligent the search, no such thought could be found, even implicitly, in anything Obama has ever said. In his preternatural neediness, Clinton, an overflowing caldron of narcissism and solipsism, is still smarting from Obama's banal observation, four weeks ago, that Ronald Reagan was a more transformative president than Clinton.

Then in Virginia last Sunday, his wife, true to the family tradition of "two for the price of one," contributed her own howler to the growing archive of Clintoniana. She said she is constantly being urged to unleash her inner Pericles: "People say to me all the time, `You're so specific. Why don't you just come and, you know, really just give us one of those great rhetorical flourishes and then, you know, get everybody all whooped up?'"

It must be wearisome. But surely people are "all the time" pestering her about being so substantive. It is a stronger word; she should tweak her fable in future tellings.

Strangeness is a bipartisan commodity at this point in the political season. Both parties' contests are being colored by idiosyncrasies.

Democrats, who consider equality the value before which the virtuous genuflect, worry that their nomination might be settled by "superdelegates," who are more equal than others. These are august people (officeholders, party officials, former luminaries) who, although no one voted to give them the job, get to vote at the nominating convention because liberals believe that if they fine-tune the world's rules with this or that wrinkle, everything will come out just right.

Many Republicans think that, come what may, things will come out the way Providence intends. Daniel Webster said "miracles do not cluster," but Webster did not anticipate Mike Huckabee, whose campaign manager is, evidently, God. Two months ago Huckabee said he rose in Iowa because of divine intervention (the power that propelled him there was not "human" but the one that fed the multitudes with two fish and five loaves). Last Saturday, as he was winning the caucuses in Kansas, where many Republicans think Darwin should go back to Missouri where he came from, Huckabee said that the arithmetic is daunting (he must win almost all the remaining delegates to stop McCain) but he shall persevere:

"I know people say that the math doesn't work out. Folks, I didn't major in math. I majored in miracles, and I still believe in those too."

Although some of his supporters defend him against the accusation of sincerity, it is not unfair to assume that Huckabee, who has made his piety integral to his politics, means what he says. There is appealing clarity, but also a whiff of lunacy or charlatanry, in the theory that the Author of the Universe is writing his campaign story. "The world," wrote the poet Gerard Manley Hopkins, "is charged with the grandeur of God." The world, perhaps, but the Republican delegate scramble?

Maybe Huckabee hopes that his credentials as a potential running mate for McCain will be strengthened if he achieves a (strictly speaking) providential victory in the Texas primary. McCain might, however, prefer a vice president who is less directly guided by Providence. And McCain will not long be amused by Huckabee continuing to offer himself as a vessel into which conservatives pour their disapproval of the inevitable.

McCain wants conservatives to take "yes" for an answer -- yes, yes, yes, make the president's tax cuts permanent, secure the borders, find more judges like John Roberts and Sam Alito (judges who would nibble to nothingness McCain's signature achievement, the McCain-Feingold campaign regulations). McCain wants them to take "yes" for an answer quickly, so he can get back to courting independent voters who might decide who becomes president.

Unless God decides. Or "everybody all whooped up" does.