George Mullen
|
Posted: Jul 07, 2021 12:01 AM
Share   Tweet
The opinions expressed by columnists are their own and do not necessarily represent the views of Townhall.com. 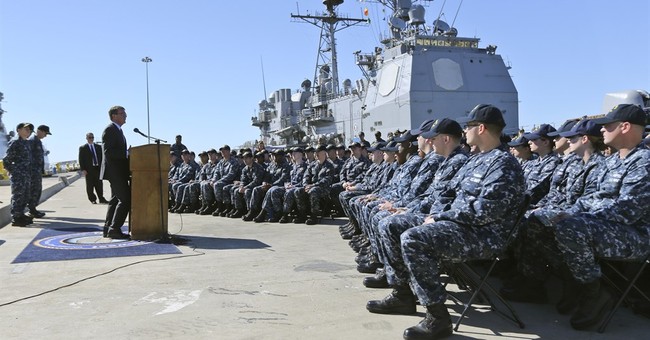 The United States Naval base in San Diego is one of the largest and most important in the world, especially with respect to facing the rising threat of China.  And, yet, the Secretary of the Navy has long left this base in the vulnerable position of having only one exit point for its massive flotilla of warships.

In Suez, we just witnessed why it is critically important for America to create a second functional opening for San Diego’s indispensable base.  Likewise, the process of doing so presents a unique opportunity to build a series of breakwater wave-energy turbines that can produce significant green-energy for the region.  As such, this second bay opening project should be a top national security imperative, as well as a centerpiece green-energy initiative in President Joe Biden's infrastructure bill.

On March 23, one of the world's largest container ships, the Panamanian-flagged Ever Given, ran aground during heavy winds in the Suez Canal.  The ship's 1,312-foot length — equivalent to the height of the Empire State Building — completely blocked the waterway causing global shipping chaos for weeks.  One ship, one windstorm, look at the impact.

Imagine a Carnival Cruise Liner or Dole Foods container ship entering the one-channel entrance into San Diego Bay when a speed boat packed with TNT (or fertilizer) crashes into its side.  Or perhaps a banana container filled with C-4 plastic explosives hidden in the ship's hold is detonated remotely. Or a guided missile strikes. The resultant explosion sinks this ship smack in the middle of the bay's entrance.  Suddenly, three nuclear-powered U.S. Navy aircraft carriers, along with approximately 50 additional home ported Navy ships, can't exit the harbor for months or longer.  Likewise, no cargo ships or cruise ships can come or go.

Simultaneously, the aggressor could sabotage the mid-bay Coronado Bridge to collapse in order to further bottle up San Diego's naval armada.

Does it make sense for the Secretary of the Navy (and San Diego region) to continue to allow this level of danger with one of America’s largest and most important naval bases when we can easily dredge a second bay opening through Coronado's Silver Strand?

One of Imperial Japan's primary goals in their surprise World War II attack was to block Pearl Harbor's entrance in order to bottle up the large number of U.S. Navy ships ported there.  As such, they concentrated significant aerial firepower upon the underway battleship USS Nevada with the goal of sinking her in the channel of the harbor's entrance.  American naval authorities recognized the danger and ordered the Nevada to immediately beach herself, successfully averting the attempt.

Pearl Harbor and September 11 are daily reminders that surprise attacks should never be dismissed. Dangerous adversaries remain — China, Russia, Iran, al Qaeda, ISIS, drug cartels, as well as numerous dark-web operators.  Which ones might like to see a large portion of the United States Pacific Fleet bottled up in port?  Perhaps one with designs on Taiwan?

The most profound lesson of the 1930s is that when there is a rising authoritarian naval power in the Far East, America should be rapidly preparing for the worst.  This policy is also known as "better safe than sorry".  And China is a far more dangerous adversary than even Imperial Japan was — China just launched its 300th warship and is on target to soon have over 350.  (The U.S. Navy has 290 warships.)  China also commissioned three new warships on a single day in April. China's rapid naval build-up should be setting off alarm-bells across the Pacific Rim and throughout the entire global community.

In line with the prior danger posed by Imperial Japan, the Chinese Communist Party (CCP) remains a direct threat to freedom, individual rights, and democracy everywhere.  From 1935 on, the United States was on an inextricable collision course with Imperial Japan; it appears America may be on the same path today with CCP China.

America must recognize that removing a massive sunken ship from San Diego's bay entrance would be monumentally more difficult than dislodging a beached ship in Suez.  The best way to avoid it from happening is by diversifying access points, thus removing the temptation to bad actors.  Virginia's Chesapeake Bay Bridge-Tunnel completed in 1964 created multiple channels and two tunnel sections to ensure the presence of alternate routes into the Atlantic Ocean for the 75 plus U.S. Navy ships ported in Norfolk.

The good news for San Diego and the U.S. Navy is that a second bay opening into the Pacific Ocean can be easily achieved.  (This is not the case for many one-entrance ports such as San Francisco Bay and Pearl Harbor.)  Coronado’s Silver Strand is at sea-level and has less than a hundred yards of land between the bay and ocean in several locations.  The project would entail dredging a short channel through San Diego's South Bay and exiting into the ocean through the Emory Basin between the Coronado Cays and the new Naval Amphibious Training Base.

This second bay opening will necessitate the building of a short tunnel for State Route 75 to go under it.  Likewise, the construction of breakwaters into the Pacific Ocean.  And it is these breakwaters which offer San Diego and the U.S. Navy an extraordinary opportunity to build a large-scale green electricity plant via wave-energy as proven by Spain's innovative Mutriku Wave Energy Plant.  Importantly, the large size of San Diego’s breakwaters could generate a significant multiple of Mutriku's output.  The energy it produces could then help power the adjacent U.S. Navy bases and cities of Imperial Beach and Coronado.

As far as environmental concerns, Nancy Ray of the Los Angeles Times reported in 1987, "The U.S. Army Corps of Engineers launched an intensive study of the [San Diego Bay] channel project, even building a huge, 2,500-square-foot model of the bay to test out the consequences of changing tidal currents by opening up the South Bay to the ocean."

"The verdict: the second entrance would improve the tidal flushing action of the bay without eroding the deep-water channels used by commercial and military ships."

The economic benefits to the San Diego region will be immense as well. The adjacent bay cities of Imperial Beach, Chula Vista and National City will boom with new bay-based and sea-based activity spurred by this project.  Furthermore, the Federal Government will be compelled to embrace a viable solution to the ongoing Tijuana sewage problems that have long plagued the area.

During President Franklin Delano Roosevelt's visit in 1935, he remarked that San Diego desperately needed a backdoor to its bay based on national security.  FDR (who was Assistant Secretary of the Navy during World War I) recognized the significant danger and promised $20 million ($400 million in today's dollars) in federal funding to make it happen.

FDR's project never materialized — nor have multiple attempts since — and so the U.S. Navy (and San Diego) continue to tempt fate with a single bay door.

Establishing this second bay entrance is long overdue and will be of significant benefit to San Diego, the U.S. Navy, and the United States.  In order to prevent further delay, this project should be funded in its entirety by the Federal Government as a national security / green-energy centerpiece of President Biden's infrastructure bill.

There is simply no time to waste.  Storm clouds are on the horizon.

George Mullen is the author of "The Coming Financial Tsunami" (2005) and "Welcome to the Bubble Economy" (2006), which accurately predicted the 2007-08 global economic crash. He is spearheading Sunbreak Ranch in the effort to end America's homeless crisis.  He is a principal of StudioRevolution.com in San Diego, California.