The Political Show Trial of the Century 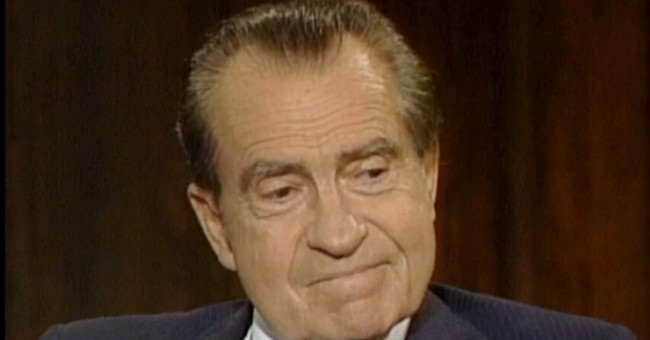 October 1 is the anniversary of the start of the Watergate cover-up trial in 1974, which we now know was the most elaborately orchestrated show trial in American history.

The primary defendants—John Mitchell, H. R. Haldeman, and John Ehrlichman—had been the top aides to former President Richard Nixon, who was driven from office two months earlier. After a 3-month trial, all three were convicted on all counts (conspiracy, obstruction of justice, and perjury) and sentenced to prison terms of two and a half to eight years.

By the time the trial began, after almost two and a half years of relentless and adverse publicity, Mitchell, Haldeman, and Ehrlichman were universally despised. Yet most Americans would agree that even the most unpopular defendants deserve a fair trial—one that is presided over by an impartial judge, conducted by non-partisan prosecutors bound by uniformly applied rules of conduct before a jury that is both politically unbiased and untainted by adverse publicity, and with the right to appeal to a court of review that is equally fair and impartial.

The Watergate cover-up trial failed every one of these standards of fairness. Documents recently uncovered in the National Archives and elsewhere reveal violations of the due process of law so serious that the convictions obtained are hopelessly tainted.

Why are these violations just now coming to light? Principally because the top three prosecutors—Watergate Special Prosecutor Archibald Cox, his closest assistant, James Vorenberg, and Cox’s successor as special prosecutor, Leon Jaworski—all took their Watergate files with them when they left office. These were official government records that should have found their way to our National Archives, where they would become available to all researchers. Instead, through a cover-up of their own, the prosecutors made sure they were hidden from the public for nearly 40 years.

The unearthed records show that the trial judge, John Sirica, met in secret with prosecutors at least eight times to work out issues in advance of trial. They also show that Sirica met, again in secret, a half-dozen times with other parties who had interests adverse to the defendants. The Sixth Amendment guarantees defendants the right to confront their accusers in court, where they are under oath and subject to cross-examination. But in the prosecution of the Watergate cover-up, adverse parties got to whisper in the judge’s ear, in private and without the knowledge of the defendants.

John Dean, the government’s lead witness in the cover-up trial, had pleaded guilty to obstruction of justice. Sirica sentenced him to a harsh prison term of one to four years and ordered him incarcerated on the eve of the trial. This punishment, however, was a sham devised to enhance Dean’s credibility with the jury. Dean never spent a night in jail, and within a week of the convictions, Sirica set him free. During his four months of “confinement,” he slept in a witness protection facility at an army base and spent his days in the prosecutors’ offices working on his book. Dean’s sentence was a fraud on the jury as well as on the American public.

John Sirica, the chief judge of the federal district court in Washington until his 70th birthday on March 19, 1974, was extremely sympathetic to the Watergate prosecution. The prosecutors reached a secret agreement to bring their indictments before that birthday, while he still had the power to appoint himself to the cover-up trial. They hid from defendants’ counsel evidence that their two lead witnesses had changed their testimony during the course of their discussions with prosecutors—evidence they were required by law to disclose. The records also show they indicted Republicans in violation of their own guidelines and did not indict Democrats falling within them.

Perhaps most egregiously of all, the special prosecutor met secretly with the chief judge of the federal court of appeals, urging him to take special steps to assure that Sirica’s highly questionable conduct was uniformly upheld on appeal.

Americans have not been told the truth about Watergate. Yes, there was a burglary. Yes, there was a cover-up. Both crimes should have been punished. But the record now shows beyond any doubt that the judges and prosecutors subverted the constitutional rights of the Watergate defendants in their single-minded effort to drive Nixon from office, to imprison his top aides, and to realign political power without the inconvenience of an election.

Congress, which created the office of the special prosecutor, and the federal courts of the District of Columbia should investigate what went wrong in the Watergate prosecution and offer the American people an account. Grand jury records connected to the cover-up indictments should be released, and the cover up verdicts should be vacated. It’s time for the full truth about Watergate to come out.