Gary Green
|
Posted: Jun 22, 2022 12:01 AM
Share   Tweet
The opinions expressed by columnists are their own and do not necessarily represent the views of Townhall.com. 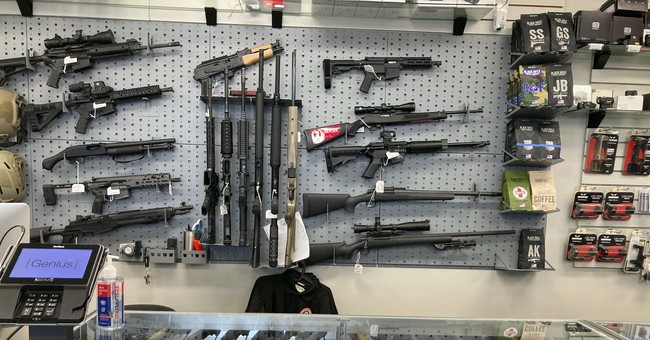 Part of the “gun control” package of new laws now being debated in the U.S. Senate includes possible grant monies for states to develop their own versions of a “red flag” law—by which a petition to a state court can result in an order for the temporary removal of firearms from a person who a judge believes may present a danger to others or themselves.  About two-fifths of the states and the District of Columbia now have some form of a red flag law, while one state (Oklahoma) passed an “anti-red flag law” in 2020.

Supporters of the 2nd Amendment have backlashed particularly against the “red flag” component of the Senate’s proposed gun control package because, first, that Amendment states that “the right of the people to keep and bear Arms, shall not be infringed”; and, second, because they fear that red flag laws will quickly lead to a denial of due process in the confiscation of legally possessed firearms.  Given the Democrat Party’s ultimate end game of disarming American citizens, the outcry is quite understandable.

Risk-based gun removal laws are analogous to involuntary civil commitments, in which, after a court hearing based on a petition, persons are forcibly incarcerated in a mental health facility because they are believed to be a danger to themselves or others.  Involuntary civil commitment proceedings are not uncommon and are thought to have a high degree of due process associated with them.

Another connection between involuntary civil commitment and red flag laws is that any person who has ever been involuntarily civilly committed is federally ineligible to possess a firearm unless it can be shown that their alleged mental illness has been successfully treated.  Thus, physically incapacitating a person perceived to be dangerous and who has committed no crime—whether by forcibly incarcerating them through involuntary civil commitment or by confiscating their firearm(s) under a red flag law—is not in any way a new idea.

Second Amendment advocates have historically not put forth any consistently strident objections to involuntary civil commitment, nor to the possibly life-long denial of gun possession forced upon those who have been civilly committed even only once and for a short period.  This is so despite the essential sameness of red flag and commitment laws.

Many current state red flag laws afford a very high degree of due process because they require “clear and convincing evidence” that the person is a danger, and the accused is afforded the 6th Amendment rights to have an attorney present at the confiscation hearing and to confront opposing witnesses there.  Whether a gun will be taken away is a judicial determination and not based on whim by an unelected bureaucrat.  Further, many petitions to confiscate are granted because the defendant either agrees to it or does not attend the hearing.  As well, many petitions to confiscate are denied.

Perhaps most important counterargument to the “denial of due process” objection to red flag law is that the landmark 2008 U.S. Supreme Court case District of Columbia v. Heller that pronounced an individual right to keep and bear arms under the 2nd Amendment also concluded (at footnote 26) that “presumptively lawful regulatory measures,” which could easily include red flag law, are permissible under Heller.

In short, the huge “Denial of due process!” backlash against the Senate’s proposed monetary help for states to enact reasonable red flag law may be immoderate.

What should be of much greater concern is the insidious operational dynamics of red flag law, or any other law that attempts to physically incapacitate someone from committing a dangerous act, including involuntary civil commitments, pre-trial release decisions for criminal defendants, the prison-or-probation decision post-conviction, and the decision whether to grant parole to an incarcerated convict.

All predictions of dangerousness naturally produce a strong propensity to over-predict violent behavior.  This is so because the only identifiable mistakes in the predictions of dangerousness are under-predictions.  This means that judges who would be making the decision whether to confiscate a firearm could be proven wrong ONLY when they rule to not confiscate and the accused’s gun is subsequently used in a violent crime.

If, on the other hand, the judge grants the petition to take the gun(s), she or he is then free and clear of any accusation that the blood of a subsequent victim is on their judicial hands.  This would be so even if the person whose firearm is confiscated then finds another gun (or a knife or any other dangerous weapon such as a screwdriver) and uses it to commit a violent crime.

That’s the rub.  Regardless of whether “due process” is there and only “clear and convincing evidence” to confiscate are the established criteria, judges who have even an inkling of a doubt are going to take the gun away because that decision can never be proven wrong.  It’s just part of the treacherous operational dynamics of any system that tries to predict, and then prevent, dangerousness.

The American Psychiatric Association openly admits that “While psychiatrists can often identify circumstances associated with an increased likelihood of violent behavior, they cannot predict dangerousness with definitive accuracy.”  Certainly a judge cannot, either.  The real issues with red flag law, then, are its inherent strong tendency to overpredict future dangerousness among lawful gun owners, and the fact that there is nothing we can do about it.