Gabe Kaminsky
|
Posted: Jan 19, 2021 12:01 AM
Share   Tweet
The opinions expressed by columnists are their own and do not necessarily represent the views of Townhall.com. 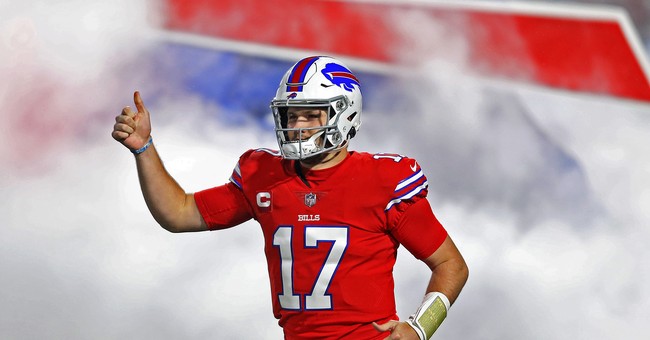 Bills fans “are people with American flags and dogs,” said ESPN commentator Domonique Foxworth back in December of 2020. Now they’re people whose team is in the AFC championship as well.

For the first time since 1993, the year in which they got blown out by Troy Aikman and the Dallas Cowboys in Super Bowl XXVIII, the Buffalo Bills are headed back to the AFC Championship. It is not merely a miracle or lucky season. The team deserves it. Through the engine of 24-year-old quarterback Josh Allen and veteran wideout Stefon Diggs, the team has risen to the challenge offensively. The Bills defense has been lights out as well, shutting down shifty Lamar Jackson prior to his unfortunate injury in the Divisional round on Saturday, and intercepting a ball for a touchdown in the third quarter for 101 yards.

The doubters have continued to be proven wrong, but not everyone is thrilled about Buffalo’s ascent into NFL royalty. In December of this past year, ESPN analyst and commentator Domonique Foxworth made ridiculous comments about both Josh Allen and fans of Buffalo.

“...The people who are telling me that Josh is the second coming and Josh is better than everybody are people with American flags and dogs and skulls and crossbones... If you just take a dip into their tweet history, it’s some really concerning retweets and likes...,” Foxworth said on ESPN program “The Right Time with Bomani Jones.”

Outspoken conservative radio host and Outkick founder Clay Travis had much to say about Foxworth’s prior nonsensical and charged comments. On his website, writer Joe Kinsey accused Foxworth of trying to “bait in the Bills fans and create a feud as a ratings play.” Foxworth’s ad hominem toward Allen in particular was ridiculed by several Bills players, in light of Josh’s gracious charity in the name of his grandmother that has raised over $1 million for John R. Oishei Children’s Hospital.

“Hold up bruh...we not jus letting this slide, yeah?! @espn this what we on now in the sports world!? @foxworth24 we gotta do better my brother...cause this ain’t it,” tweeted Bills cornerback Jordan Poyer.

Foxworth is not the only commentator who has continued to be in a state of disbelief over the success of Buffalo this season. In the Divisional round, four ESPN experts picked the Ravens and the spread misguidedly hovered at -2.5. For a #2 seed that put up 6,343 total yards this regular season, the second most points per game — and for being the second ranked overall offense in the NFL behind Kansas City — this is a shaky spread. Comparatively, Baltimore has put up the 14th least yards in the league ahead of the abysmal Detroit Lions.

Outside New Era Field in Buffalo, there are various dives and shops. Some establishments proudly display Buffalo Bills flags, others adjoined to both an American flag and a Blue Lives Matter one. The city is electric. Fans gather at City Hall to celebrate and high five. Bocce Pizza has a waiting list for orders. These are people proud to be from the city of Buffalo — to participate in a football tradition that stems back to 1960. It is freezing cold and the wind gusts all around, but fans line up to take pictures clutching their gear in front of the stadium on Sunday, Jan. 17 — the day after the game.

Now the Bills will head to Arrowhead stadium to face off against Patrick Mahomes (likely), who just suffered a concussion, but a nonetheless deep and tremendously talented team. Surely the doubters will be loud and vocal for this contest, but one thing is for certain. If Josh Allen can lead Buffalo in a remarkable upset against one of the most high-powered offensive attacks the game has ever seen, the ridicule has to be put to bed. In place of it, if not already given Allen’s ability to pluck the Bills out of obscurity and generations of circling the wagons, there must be a recognition of the legitimacy of the small-town saga turned dynasty.

Gabe Kaminsky (@Gabe__Kaminsky) is a rising senior at the University of Pittsburgh and a forthcoming spring intern at The Federalist through the National Journalism Center. He is also an Academy participant at The Heritage Foundation, with bylines in Townhall.com, The Washington Times, The American Conservative, Washington Examiner, RealClearPolitics, and several other outlets.