The Rubio-Singer Molotov Cocktail for Conservatives

Fr. Marcel Guarnizo
|
Posted: Feb 16, 2016 6:30 PM
Share   Tweet
The opinions expressed by columnists are their own and do not necessarily represent the views of Townhall.com. 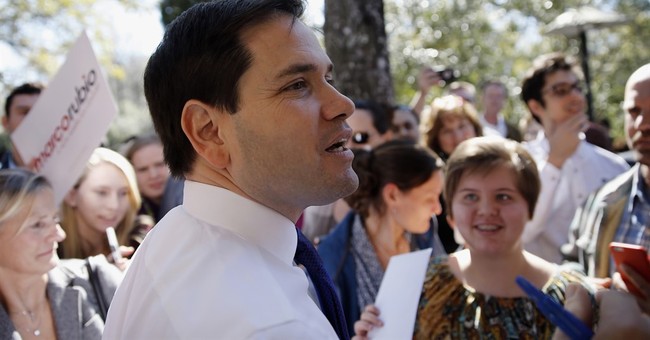 Marco Rubio insists that he is the best candidate to advance the cause and the protection of marriage in America. There is a reason to be highly skeptical of his claim: The reason is that Marco Rubio has taken millions of dollars for his campaign from billionaire hedge fund manager, Paul Singer, a leading patron of the gay rights, LGTB, and the gay marriage movement.

The Wall Street Journal describes Singer as a “specialist,” in activism. Paul Singer, Carl Icahn and others are among those high profile investors, who are known in the financial world as “activist investors.” Singer and his friends are notorious for buying large stakes in companies, and reorganizing them through their financial influence. Singer is the founder of the hedge fund Elliot Management Corporation, which the New York Times described as an “activist hedge fund.”

Singer has been involved in massive litigation with governments, notably Argentina and Peru. He has fought against corporations such as Samsung and others. Paul Singer takes no prisoners and his tactics to achieve his activist goals are nothing short of astonishing. In a disagreement with Argentina, he seized the naval vessel ARA Libertad, seeking to force Argentina to pay up on his investment. Apparently he also was trying to seize the Argentinian Air Force One plane. Rubio stands no chance against this crowd.

Most social conservatives fail to understand the nature of a massive donation from Singer to the Rubio camp. They fail to see that Singer is putting money down now in order to achieve his objectives in the future.

Singer is an investor, not just a donor. Most social conservatives are used to fundraising having no strings attached. This is not what takes place when a candidate accepts the “donations” of activist investors of Singer’s ilk. Social conservatives, evangelicals, and others who are fighting to preserve marriage in our nation should understand Singer’s aims and take them very seriously. I submit that a President Rubio, will not advance the cause of marriage, and the odds are it will be seriously damaged. Rubio has or will cut a deal in the future and this is more risk than we can afford. This should be a clear signal, a red flag, of the risks we are running with a Rubio candidacy. Rubio will have to pay the piper if he wins.

What Does Paul Singer Want?

Singer’s aims in the cultural and political realm are no secret. He invests to push forward his social agenda. One of his principal investment aims is to persuade other Republicans to support gay marriage.

It is estimated Singer has donated $10 million dollars to homosexual movement activism in America. Singer has made abundantly clear that his principal aim is the support of “gay rights” in the Republican Party. His circle of activist is also keen on funding LGBT “equality.” The Washington Blade, a leading advocate for LGBT issues, also reported Singer’s efforts in this regard.

Singer has stated that gay marriage will promote “family stability.” He is also quoted as stating that, “gay marriage” “… is kind of a lovely thing and a cool thing and a wonderful thing.” Singer and his friends Dan Loeb (of Third Point), Seth Klarman (of Baupost Group), Cliff Asness (of AQR Capital), and Steve Cohen (of Point 72 Asset Management), have also been funding pro-gay marriage nonprofits, including “Freedom to Marry.”

Singer helped fund legislation in New York and Maryland to legalize gay marriage. He kick-started the American Unity Political Action Committee (PAC) with a $1,000,000 contribution. The New York Times reports that American Unity PAC has as its “… sole mission… to encourage Republican candidates to support same-sex marriage, in part by helping them feel financially shielded from any blowback from well-funded groups that oppose it.”

The Singer circle of investors celebrated the Supreme Court decision for the national legalization of gay marriage, Steve Cohen’s spokesperson stated, “We’re pleased with the Court’s ruling… and hope this serves as a catalyst for global change…”

What Does Paul Singer Want with Marco Rubio?

What do Singer and his crowd want with Marco Rubio?

For one thing, they are very likely interested in ensuring that Rubio chooses Supreme Court justices who will not oppose the path towards “gay and LGTB rights.” The work to remedy the crisis of the family will not advance under Rubio, for no activist investor such as Singer would donate to Rubio without assurances or the calculation that they can further their aims through their investment. These fellows do not donate money they invest and expect results.

In 2013, Singer told the Washington Post: “I believe marriage equality is critical to the future of individual liberty and the strength of the American family, and the Republican Party should stand for both.” Marco Rubio can say he is personally for the family but so do most Republican politicians; Democrats used to do the same. When you consider a candidate, remember the old saying: Talk is cheap. The question of who is lining his or her pockets is a much clearer indication of where the nation will be headed should the candidate prevail.

In my view, there is a clear choice of a candidate who will fight for life and marriage: Ted Cruz. Cruz was endorsed by the National Organization for Marriage precisely because he is reliable on the issue. I can honestly say I never saw Marco Rubio in the fight for marriage in this nation. Singer was funding Maryland’s legalization of marriage, the first referendum we lost in this fight.

It is baffling that some evangelicals and social conservatives are dabbling with the likes of Marco Rubio. Some may find Rubio more likable, but I doubt these conservatives will like it when the Paul Singer activist crowd achieves its progressive aims through a Rubio presidency.

There is ample evidence of why Singer and friends courted Rubio as the recipient of their financial largesse. Rubio has already made himself abundantly clear on the issues that they want to influence with their seven-figure contributions. On the question of gay marriage Rubio has stated clearly: “I don’t believe that your sexual preferences are a choice… the bottom line is I believe that sexual preference is something people are born with.”

Yes, and this is exactly what Paul Singer, the Supreme Court and the gay lobby in general believe. It is this flawed argument that has been the excuse for the demise of the family and the rise of “gay rights” in America.

Singer also made a six-figure donation to the National Immigration Forum—a George Soros backed organization. So if you also care about the open borders crowd running the show you should consider carefully what will happen if Rubio prevails.

Rush Limbaugh predicted that in a Rubio presidency within, “… the first 12-to-18 months the donor-class agenda will be implemented, including amnesty and whatever else they want.”

Rubio has stated the philosophical point that will be the basis from which he will operate on the immigration issue: “We’re not going to ram it down your throat.” Instead, I presume, it will be death by a thousand wounds. Phyllis Schlafly has amply dealt with this issue.

Conservatives and others who care about marriage and our border security are sleeping at the wheel if they cannot foresee that Rubio is playing with fire on these matters. And it is at our own peril that we continue this adventurism with the Rubio-Paul Singer crowd.