Have Americans Lost Their Minds? 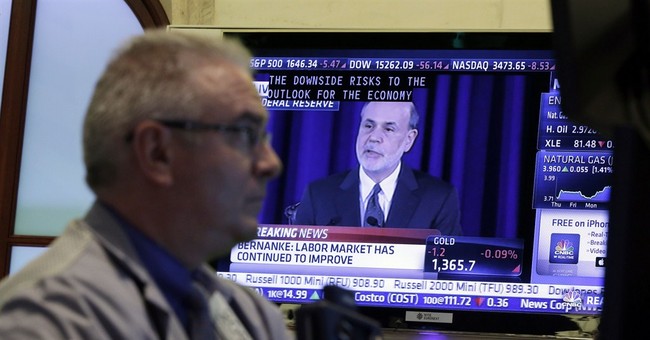 Yee Haw! Ben Bernanke has spoken! The economy is doing so well the Fed must continue easing. Sugar Daddy delivers more sugar but warns the sugar junkies it will be coming to an end.

From the AP: ” Bernanke said the reductions would occur in “measured steps” and that bond purchases could end in the middle of next year. By then he thinks unemployment will be around 7%.”

Based upon what Ben? The government’s perverted measure of unemployment through the BLS? Does Ben realize that the reason the unemployment rate is falling is due to millions of disaffected workers dropping out of the workforce?

I doubt it and here’s why. This is the man who said….

May 17, 2007: “The effects of the troubles in the subprime sector on the broader housing market will likely be limited, and we do not expect significant spillovers from the subprime market to the rest of the economy, or to the financial system.”

September 24, 2008: “Over time, a number of factors should promote the return of our economy to higher levels of employment and sustainable growth with price stability, including stimulus being provided by monetary policy, lower oil prices, increasing stability in the mortgage and housing markets, and the natural recuperative powers of our economy.”

Ben must think you have lost your mind to believe his cockamamie excuse for slowing stimulus programs; an improving economy.

But there is hope. The youth in America seems to be catching on. From my 27 year old son who works in D.C. after Bernanke’s FMOC speech:

News update from NYT on my phone seems counter-intuitive: “Fed More Optimistic About Economy, Maintains Bond Buying”. What real news update should have been: “Fed Admits Futility of Central Planning, Has No Idea How to Take Drug Addict Off Drug; But What the Hell, Why Not, We Have to do SOMETHING!”

Yes America there is hope. When the youth of America begins to realize the farcical media and misleading central planners in the government are not honest brokers of information the tide may turn away from the appealing progressive propaganda which is nothing more than an assault upon our economy, and Constitution.

Old Ben is putting a lot of stock in the housing bubble he has created with his fiat money printing, and manipulated mortgage rates that are going to cause harm to the housing market for a decade or longer when interest rates rise beyond his control.

David Stockman’s book “The Great Deformation” as analyzed at ZeroHedge strips the emperor of his clothes. Stockman points out on jobs the horrifying truth for main street:

At the time the US economy peaked in December 2007, there were 71.8 million “breadwinner” jobs in construction, manufacturing, white-collar professions, government, and full-time private services. These jobs accounted for more than half of the nation’s 138 million total payroll and on average paid about $50,000 per year—just enough to support a family.

By September 2012, the S & P 500 was up 115% from its recession lows and had recovered all of its losses from the peak of the second Greenspan bubble. By contrast, only 200,000 of the 5.6 million lost breadwinner jobs had been recovered by that same point in time.

Stockman then points out on consumer spending:

The simple reality is that household balance sheet is still way overleveraged, and for the first time in the postwar Keynesian era this leverage ratio is being forced down on a secular basis, thereby permanently restricting the rate of consumer spending. It goes without saying that this dynamic is the inverse of all previous postwar cycles.

In fact, half of the nation’s households have virtually no cash savings and live paycheck to paycheck (or government check), and most of the remainder are still too indebted to revert to borrowing and spending beyond their current stagnant and often precarious paychecks.

Thank you Mr. Stockman for telling the truth you will never hear from the mainstream media where all is peachy keen and Bernanke’s ramblings are held up as truth.

As this old redneck would put it; you can’t spend what you don’t have. You can’t save what the government takes. Doesn’t matter what the interest rate is, if you don’t have a job you aren’t buying a home.

As interest rates rise, because there wasn’t sustainable organic growth, only Bernanke sugar inflating the stock market and housing, old Ben is going to be disappointed in the human reaction within his last hope, the housing market.

America would have been better served if Ben would have left the economy to its natural recuperative powers.

If you believe Bernanke has this under control, you have in fact lost your mind.

The opinionsexpressedhere are solely those of Fritz Pfister or identified sources, and notnecessarilythose of RE/MAX Professionals of Springfield or RE/MAX International.